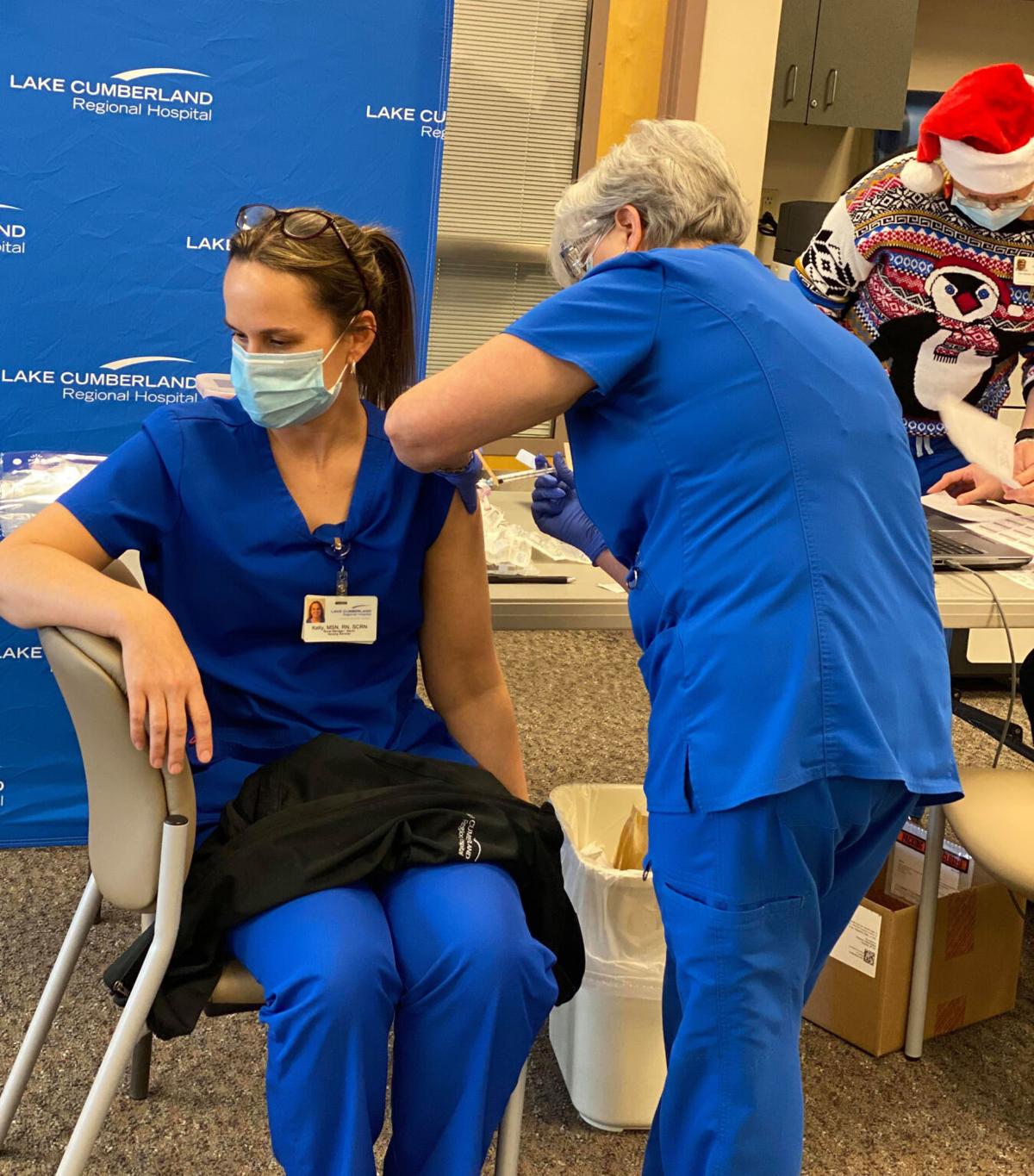 Staff at Lake Cumberland Regional Hospital, such as Kelly Venters, MSN, RN, SCRN, were recently vaccinated against COVID-19. The hospital has created a hotline to schedule members of the 1B tier for vaccinations. 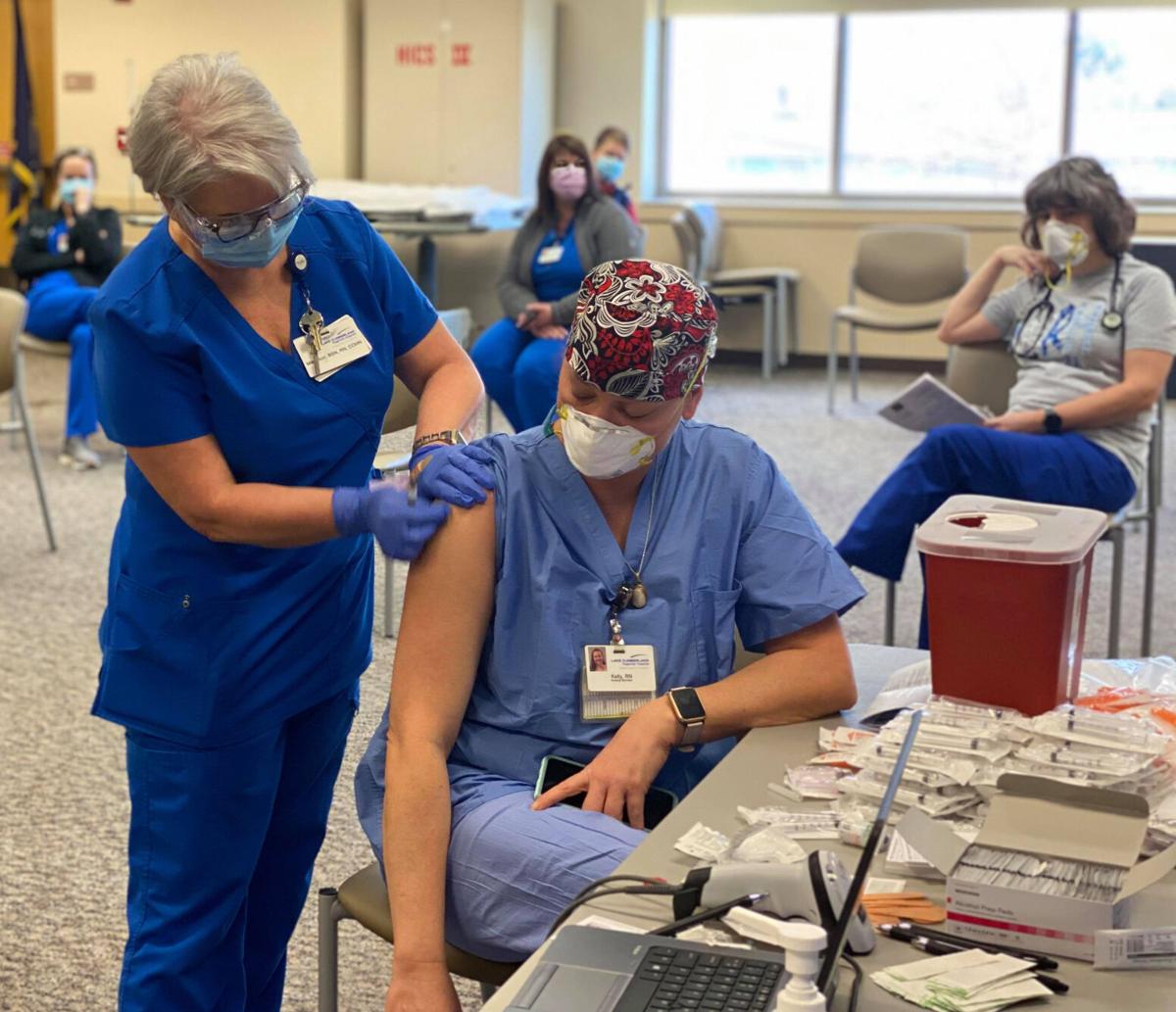 Staff at Lake Cumberland Regional Hospital, such as Kelly Venters, MSN, RN, SCRN, were recently vaccinated against COVID-19. The hospital has created a hotline to schedule members of the 1B tier for vaccinations.

After the Lake Cumberland Regional Hospital posted a Facebook message Wednesday night announcing members of the public could call a number Thursday morning and possibly schedule a COVID-19 vaccination, the overwhelming number of people attempting to call caused the available appointment spaces to fill up quickly and left many who couldn’t schedule upset and disappointed.

“We have been getting thousands of calls to that number, and we realize that it’s been frustrating for the public, but we are asking for patience because of the low number of doses and the high demand for the vaccine,” Parker said.

He added, “We apologize we don’t have more vaccine to give out at this time time but our availability is determined by the CDC and the State of Kentucky”

The vaccination appointments were limited by the number of vaccine doses the hospital has on hand, he said.

LCRH is currently following the guidelines put out by the state that allow for the vaccination of people who are in Tier 1B – those who are 70 years old or older.

Parker explained that the appointments are being made on a first-come, first-served basis. “We don’t have the ability to pick and choose people,” he said, meaning due to state guideline they cannot decide that one person should be scheduled ahead of others.

Those who were not able to get scheduled Thursday should keep an eye out for future announcements on new vaccine dates, as well as keep that hotline number – 844-675-3390 – handy.

Parker said that starting as early as next week, the hospital is expected to get around 500 doses of vaccine a week, meaning that more opportunities to sign up are coming. There will be several weeks of receiving that 500-dose amount, he said.

Parker explained the process for scheduling. When the hospital gives out the information that another round of vaccinations will be given, anyone age 70 or older can call that number. If they get a recording that tells them to leave their name and contact information, they should do that.

Someone from the hospital will give that person a call back “within a reasonable amount of time,” Parker said, likely within the next day or two. They will then give the caller more information on when to show up for their appointment.

However, if the person calling the hotline number gets a recording that there is no more vaccine available, “We hope that the public understands this message and knows that we will continue to update on new availability and new distribution methods as soon as we have them available. We will continue to use all available outlets including traditional and social media to get the word out.” Parker said.

The limited number of vaccines available each week will be doled out to residents within the entire 10-county health department district, Parker said.

That means that with the limited number of vaccines available each week and a total 10-county population of around 210,000, it will take quite a while to get through everyone.

Parker described the process for those who can get the vaccine. Those with appointments will be asked to go to the first floor of the Lake Cumberland Medical Arts building, which is behind the main hospital building and next to the helipad.

Patients are asked to bring their insurance information with them. The vaccinations are free for the patient, Parker said, but must be billed through insurance.

Those getting vaccinated will need to go through a registration process that might be lengthier than what they are used to at a doctor’s office.

The aim is to vaccinate around 100 people a day so that there are a safe number of people within the building at any given time, Parker and Prather said.

The hospital has been given the Moderna vaccine, which comes in 10-dose vials, meaning that staff are working diligently at vaccinating people in increments of 10.

Moderna vaccines also require a second shot given 28 days after the first for full effectiveness.

Parker said that in addition to the scheduled appointments, LCRH will be working closely with local schools to give vaccinations to teachers. Those clinics will be coordinated with the school districts themselves – teachers will not have to make individual appointments.

Parker said that he wanted the community to know that LCRH is thrilled to be a part of the vaccination process and that it is working closely with the Lake Cumberland District Health Department and other health partners on the vaccine rollout.

As the rollout continues, vaccinations will be made available to more members of the general public, but at this time they are only scheduling appointments with those 70 years old or older.

Prather said the hospital will continue to develop and fine-tune the process throughout the rollout. Plans are already in place to open up a vaccination clinic at the Surgery Center in Med Park West when more vaccine doses become available.

Parker asked the public to stay updated by keeping an eye out for announcements in traditional media – print and radio – as well as social media and the hospital’s website.

Also, late on Thursday the hospital was given more information about other vaccination avenues.

“We understand that there is late breaking news to say regarding the distribution of COVID-19 vaccines to those in the 1C category beginning February 1 at Kroger locations. We will continue to work with our local health department and state officials to share this info as we receive it, as well,” Parker said.