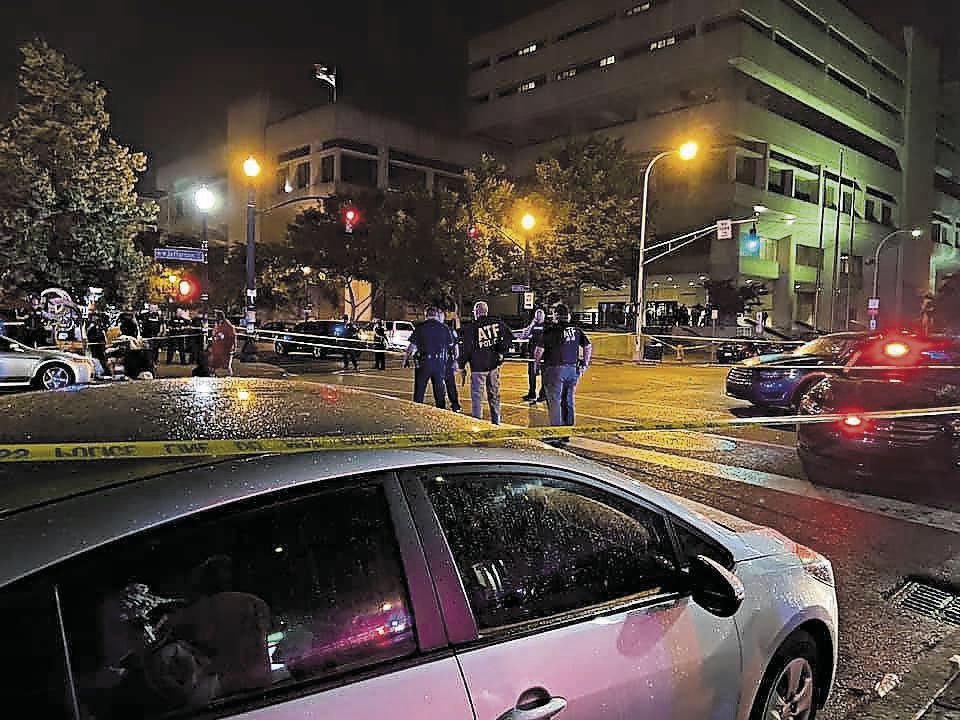 Law enforcement close off the Jefferson Square area of Louisville on Saturday night after a a protestor was shot and killed. Local nurse Courtney Riberio was at the scene, several feet away from where Louisville photographer Tyler Gerth was killed. 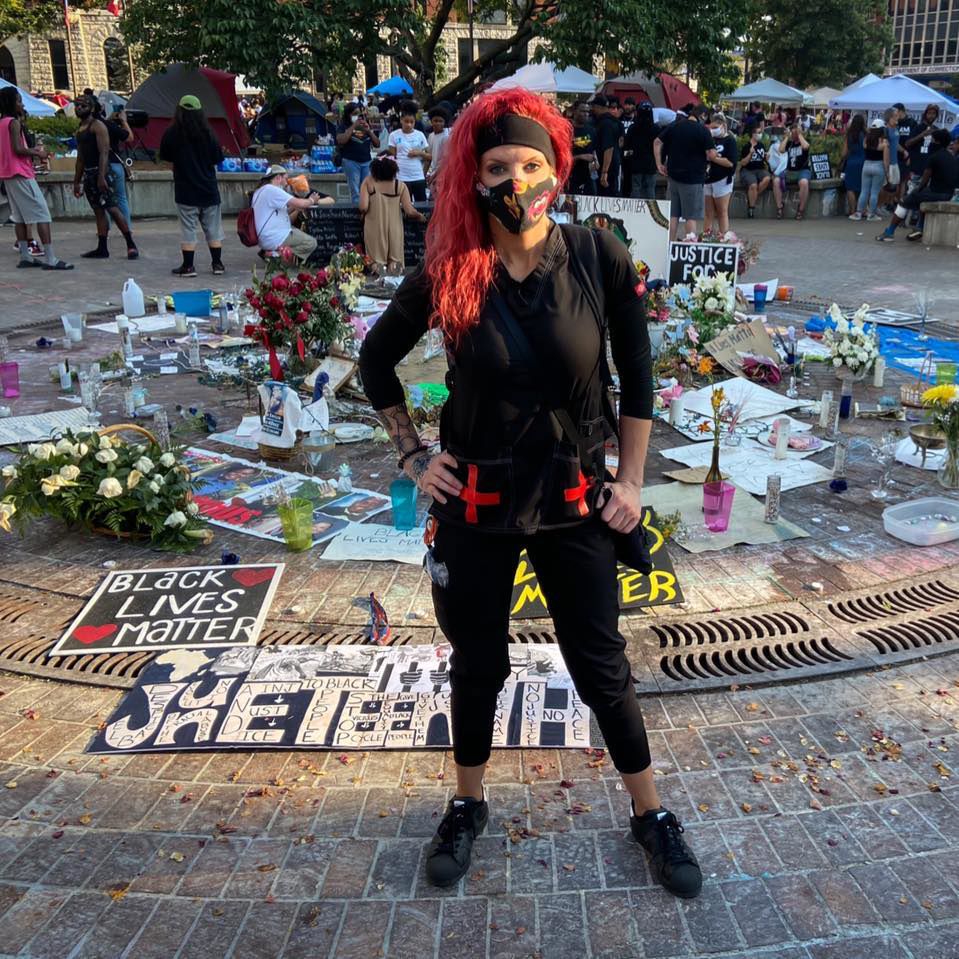 Courtney Ribeiro stands in Louisville's Jefferson Square during on June 19, or Juneteenth. Ribeiro was also in Louisville last Saturday night, volunteering as a medic, when a man fired shots into the crowd of protesters — fatally striking 27-year-old photographer Tyler Gerth.

Law enforcement close off the Jefferson Square area of Louisville on Saturday night after a a protestor was shot and killed. Local nurse Courtney Riberio was at the scene, several feet away from where Louisville photographer Tyler Gerth was killed.

Courtney Ribeiro stands in Louisville's Jefferson Square during on June 19, or Juneteenth. Ribeiro was also in Louisville last Saturday night, volunteering as a medic, when a man fired shots into the crowd of protesters — fatally striking 27-year-old photographer Tyler Gerth.

When shots rang out on Jefferson Square in Louisville around 9 p.m. Saturday night, Courtney Ribeiro was already in "nurse mode."

The local nurse had been in Louisville on Juneteenth and this past weekend volunteering as a medic as protestors seek justice specifically for Breonna Taylor and more generally racial equality. She had been treating a woman with a bloody nose when a man police have identified as 23-year-old Steven Lopez fired into the crowd of protesters — fatally striking photographer Tyler Gerth, 27.

Ribeiro called Gerth a familiar face at the protests she had attended.

"He was just there to protest with the rest of us, make people aware of the injustice," Ribeiro said, her voice breaking. "He was peaceful just like the rest of the protesters. He was just in the wrong place. He didn't do anything wrong."

When Ribeiro heard gunfire, she pulled the lady she was helping to the ground. When the shots finally stopped, she got up to see if others needed medical attention. It wasn't until she saw a video of the scene later that the gravity of what happened really struck her.

Lopez was shot in the leg by an armed protester. The protesters' armed security team also returned fire, driving Lopez from the square. The suspect was briefly hospitalized but then booked into Louisville Metro Corrections Monday night and pleaded not guilty to murder and and nine counts of first-degree wanton endangerment during an arraignment Tuesday morning.

Ribeiro believes the security team's presence saved lives, not only in apprehending Lopez but in briefing the protesters earlier in the day about what to do in the event of an active-shooter situation due to a potential threat from a militia group that she said had gathered in a near-by park. The protestors had been told to hit the ground if something happened, and when marching, women, children and the elderly were positioned in the middle with men taking the outside positions.

"The whole day we were vigilant," Ribeiro said. "…It wasn't that we weren't welcoming of everyone; we were just a little bit more on edge that day because of what was going on nearby and the threats that had been made to us.…

"We had been briefed on what to do and I think that helped in a way to limit the amount of people that were injured."

Ribeiro had planned to stay until dark, still thinking something would happen with group the protestors had been warned about, which never materialized. "I could not have anticipated what really happened," she said.

Some reports have indicated that Lopez had been participating in the protest, though noting he had been arrested at least twice before for creating disturbances in the area. Ribeiro said that he had been asked to leave by the security team earlier that day because he was disruptive.

"Every time we marched, areas were cleared by our security," Ribeiro said. "You would think that a peaceful protest wouldn't have to have so much protection, so much awareness, so much anxiety-driven precautions put in place because it's supposed to be peaceful. And it had been for 30 days.…

"There's been no need for the riot gear from the police, there's been no need for getting pepperballed or teargassed," she continued. "There's been passion; there's been frustration over what has happened but nothing that has warranted the protesters being treated the way that they've treated. I don't think people that haven't been there understand ... [The protesters] are making their voices heard in a peaceful way. But then at the same time you have so many people who want to hurt them for it, that want to blame them for violence or the other things that are happening. I don't understand that; I don't think I ever will. Maybe that's another reason I'm out there."

Ribeiro believes more people should be willing to "make themselves uncomfortable" in order to grow. To "start small," she encourages everyone to become familiar with their local governments' budgets and see what needs are and aren't being met.

She laments that Jefferson Square has been shut down to tents due to the incident. Police will now close the park each night at 11 p.m. and it will reopen at 6 a.m.

"I'm not sure how that's going to help the situation because these protesters are now displaced in a way," Ribeiro said. "We've already proved this guy wasn't part of the protest … He wasn't doing anything beneficial for us. We had even asked him to leave, as a collective."

Still the case of Lopez, who has been reported to suffer from schizophrenia and bipolar disorder, is indicative to Ribeiro of why some protesters are seeking to "defund the police." She explained that rather than dismantling law enforcement, they want some funds diverted to other programs to break the cycle of "arrest and release" for individuals who might be need mental health or substance use disorder treatment.

"So much needs to change in our system," Ribeiro said. "It's broken…A lot of people don't even understand how bad it's broken because we've just learned to deal with all these things. And we shouldn't have to.

"I don't know where to start. Every community is going to have different needs."

What happened Saturday has only strengthened Ribeiro's resolve. "I plan on going back," she said. "I know a lot people probably think I'm crazy but … this isn't going to stop us."