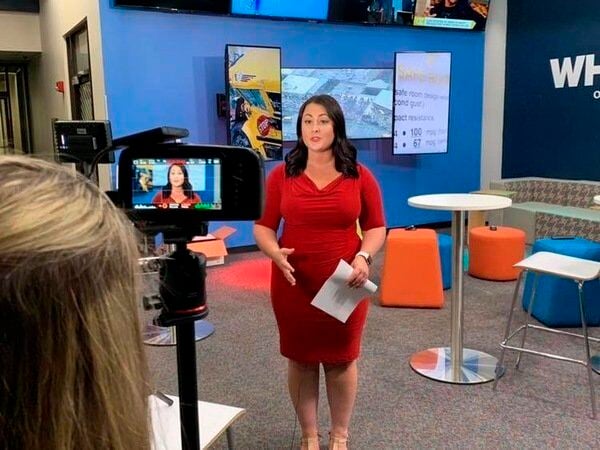 Shay in front of the camera. 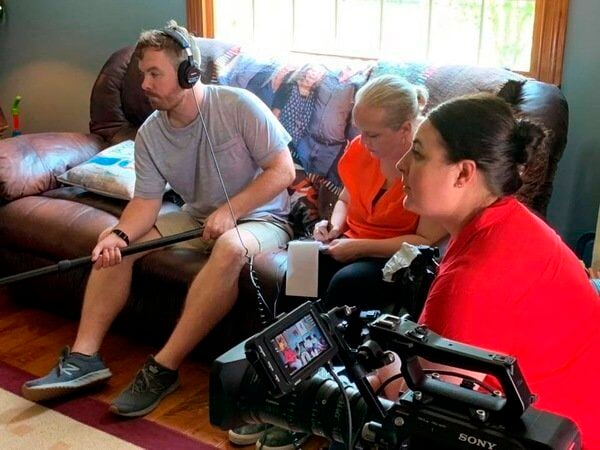 Shay and her team recording the Bardstown podcast during one of the many interviews with Sherry Ballard, mother of Crystal Rogers. 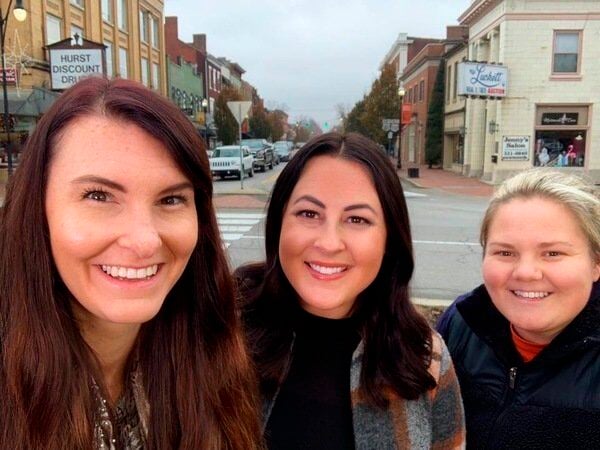 Shay (in the middle) is standing in the heart of downtown Bardstown.

Shay in front of the camera.

Shay and her team recording the Bardstown podcast during one of the many interviews with Sherry Ballard, mother of Crystal Rogers.

Shay (in the middle) is standing in the heart of downtown Bardstown.

Approximately 150 miles away in a small town similar to many in the Tri-County, five murders are unsolved, one with a connection to the Tri-County. And a little further north, one journalist is committed to finding the truth in these tragedies and opens up about her journey to the truth.

A little over seven years ago, Bardstown Police Officer Jason Ellis was killed just off the Bluegrass Parkway after finishing his shift for the night. When he stopped to pick up debris in the road (that is said to have been intentionally put there,) a gunman shot and killed him.

Ellis spent years in Williamsburg as a star baseball player for Cumberland College, now University of the Cumberlands. He met the love of his life while in Williamsburg, married her and moved back to her hometown in Nelson County where he started a career with the Bardstown Police Department.

It's been just over seven years and there are still no answers in the murder of Ellis, leaving his friends, family and members of multiple communities confused, saddened and angry.

Investigative journalist Shay McAlister moved to Louisville a little over five years ago fresh out of college. A graduate of the University of Missouri she was ready to get to work telling stories. She grew up moving around a lot as a child thanks to her father's business career. She lived in multiple states and even called Europe home for a bit. Introducing herself and asking questions of others made journalism a natural fit. She's come to have passion for shining a light on areas that would probably prefer to be dark.

She had no idea what would be ahead of her during those first couple weeks in Louisville at WHAS 11, where she continues to work today, or the path it would forge ahead of her.

When she arrived in Louisville in July of 2015, a young woman, also from Bardstown, would go missing -- a huge national news story then and still today. Crystal Rogers disappeared on July 3, 2015 and weeks later McAlister would begin to cover the case.

McAlister, who continues to cover the Rogers' case and would later come to learn, investigate and follow all the unsolved cases in Bardstown, talked with the Times-Tribune about what it's been like trying to uncover the truth and juggling the lines between professional and personal as a journalist.

Although she was brand new to the job, McAlister said the Rogers case immediately stood out. She noticed right away that Rogers' family was insistent that she wouldn't just leave and law enforcement named a main suspect but never made an arrest. These things weren't typical, noted McAlister.

Detectives, journalists and independent search teams have worked the case for years now hoping to find the truth.

McAlister said her involvement with the Rogers case poured the foundation for the work she's gone on to do and the work she continues to do in journalism and beyond. Seeing how important it is to get answers to the family of Crystal Rogers made it equally important to McAlister to help get those answers.

Since McAlister's first weeks at WHAS 11, she's put together an unsolved series covering missing and murdered loved ones from around Kentucky.

Last year McAlister and a team of producers took a deep dive into the tragedies in Bardstown including Jason Ellis's death as they worked on a hit podcast centered around all five unsolved murders in Bardstown.

It wasn't until Tommy Ballard, Crystal Rogers' father, was shot and killed that McAlister really even learned about all the loss in Bardstown. She said people began to tell her that things might be connected, that this might be a series of crimes.

"I think before Tommy... I don't think a lot of people were trying to connect the dots," McAlister said.

After Tommy Ballard was killed people started to wonder if the unsolved cases of Jason Ellis, Kathy and Samantha Netherland and Crystal Rogers along with Tommy Ballard were all somehow connected.

McAlister and her producers spent weeks in Bardstown working on the podcast. With a new crew asking different questions that she hadn't thought of, it set forth the perfect combination for a podcast to really work. McAlister knew the podcast would do well in Kentucky because listeners here are hungry for answers but she had no idea that it would get national recognition.

Over the past five years, McAlister has spent dozens of hours investigating these cases and part of that includes getting to know friends and families of the victims.

The relationship with these friends and family members has evolved over time to one where McAlister said she used to just keep in touch to get updates on the case, to one where now she's keeping in touch, making sure they are ok.

"As a human it's difficult to draw a boundary and keep a boundary especially in a case like this where we've known each other for five years," McAlister said. "I've covered the absolute most horrible things that have ever happened to them. We've talked about it at length. On the days that are the best, with the best news and on the days with the worst news of their lives, I'm there."

She sees it both ways but makes the comparison to teachers. If a teacher sees something concerning going on with one of their students, they naturally want to get involved for the wellbeing of that child.

"As long as you never cross the line to where you're turning your story into bias reporting..." said McAlister.

One year ago in the middle of recording the Bardstown podcast, McAlister lost her partner. And while she thought she knew what grief was like, she had no idea. But if there's anything positive that came from that tragedy, it is perhaps it has helped her investigate and report with even more compassion and empathy.

"It makes you listen and explain in a different way," said McAlister through tears. "It's definitely put me in a different position to cover tragedy - I think in a way with more empathy and compassion."

It was with an army of other women behind her including her mother and best friends that she got through the grieving process.

"It was my bosses who told me to stay home as long as I wanted. It was women like Sherry Ballard," she admitted.

McAlister goes on to list names including Tiny, Tammy and Rose, women that she'd gotten to know in one way or another through her reporting. It was women from a million different parts of her life who came together and held her up, McAlister said.

"What I feel like I've given to the community is so unmatched as to what they've given to me," said McAlister about Louisville and the surrounding communities.

McAlister said she's learned that everybody has a story and that story is worthy. In the beginning of her career she didn't necessarily understand that. She knows now that just because someone is smiling doesn't mean there's not tragedy or grief just beneath that smile.

It's something you really learn in this business, she said.

"As humans we don't have enough kindness and compassion for strangers," added McAlister. "I don't think people should have to earn that. We should just be giving it out because it's so true, you have no idea what someone is facing."

In Bardstown, the FBI has stepped in to help with the Crystal Rogers case and McAlister would like to think that the attention the murders received from the Bardstown podcast along with the determination of Crystal Rogers' family is to credit.

In late July human remains were found on the edge of Nelson County. Those remains have yet to be identified. McAlister interviewed FBI Special Agent in Charge Brian Jones who said the remains have been sent to Virginia and that they are working to identify them as quickly as possible.

"When we got the interview with the FBI, they told us there was a probability that the five unsolved cases, including Jason Ellis were connected and it was so much new information," said McAlister.

Now into the month of October citizens and family members are still wondering and don't have answers that just a few months ago seemed so close.

Nelson County has been good to McAlister. And the stories and memories she's made will hold a special place in heart long after justice prevails.

Until then she challenges people to think about the impact they want to leave on the world. She asks them what they want to do in order to make the world a better place and tells them to go do it.