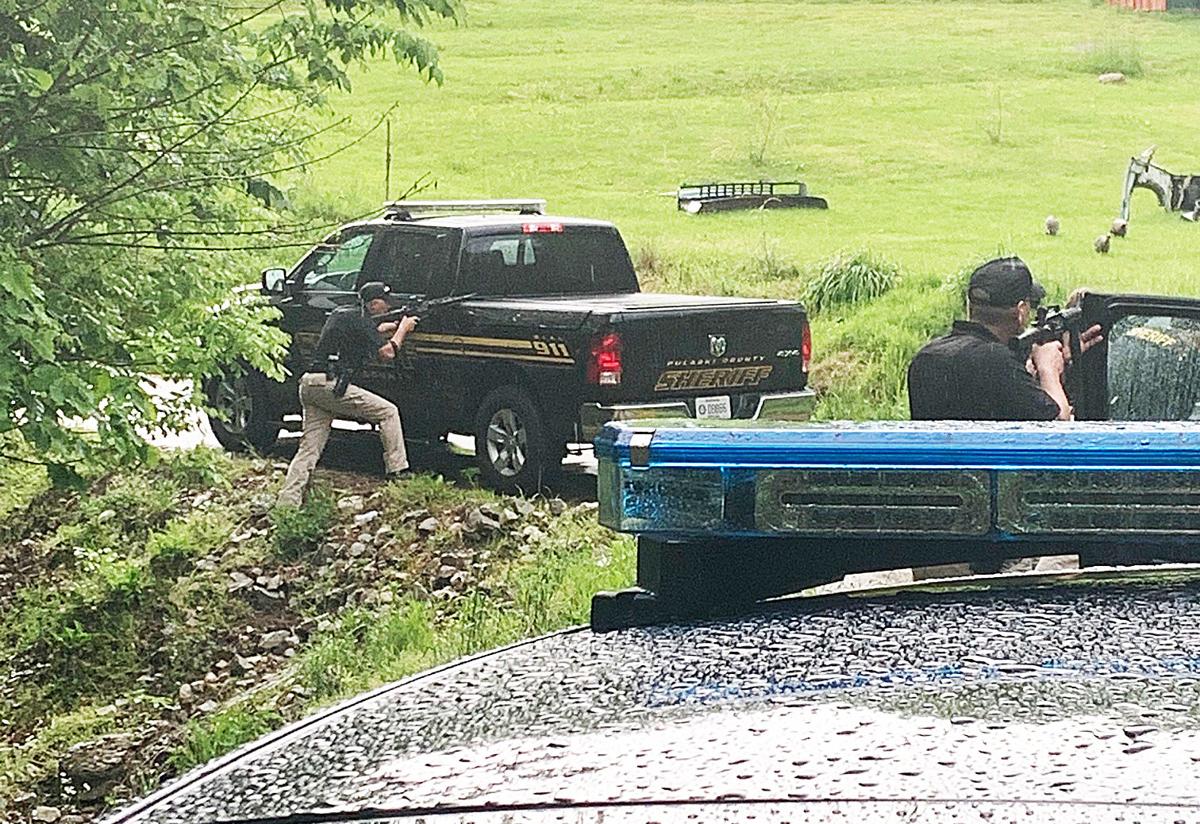 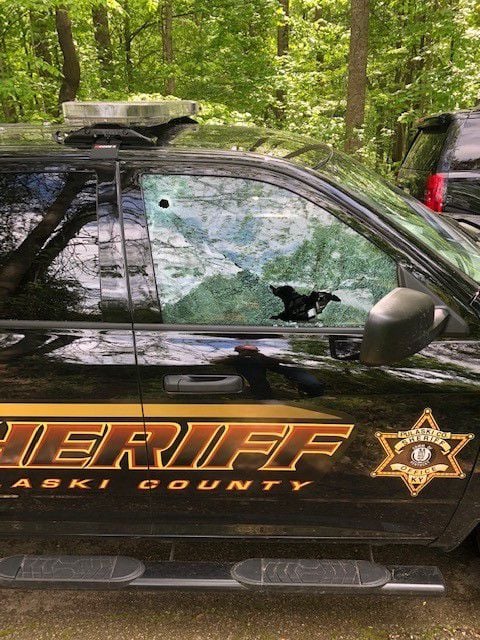 Shown is the broken window of PCSO Sgt. Cary York's vehicle. Charles Wilson is accused of shooting at law enforcement throughout an 8.5-hour standoff Monday at his Eubank residence. While no officers were reported wounded, the standoff ended when Wilson was shot by KSP's Special Response Team.

Shown is the broken window of PCSO Sgt. Cary York's vehicle. Charles Wilson is accused of shooting at law enforcement throughout an 8.5-hour standoff Monday at his Eubank residence. While no officers were reported wounded, the standoff ended when Wilson was shot by KSP's Special Response Team.

A Eubank man is in critical condition at a Lexington hospital after being shot as the result of an all-day standoff with law enforcement.

According to Kentucky State Police and Pulaski County Sheriff Greg Speck, 51-year-old Charles John Wilson is facing multiple charges in connection to the incident which began at approximately 8:58 a.m. Monday and kept officers on scene at his Smith Ridge Spur home until about 9 p.m.

Trooper Scottie Pennington, Public Affairs Officer for KSP Post 11 in London, reported that the investigation began when the Pulaski County Sheriff's Office (PCSO) responded to the shooting of a local man.

According to PCSO, deputies first responded to Puncheon Creek Road to investigate the gunshot wound. The victim, identified only as a 68-year-old male, advised deputies that the person who shot him lived on Smith Ridge Spur Road. The victim was taken to the Lake Cumberland Regional Hospital, according to the sheriff's office, and later transferred to the University of Kentucky Hospital for treatment of his injuries.

By 9:33 a.m., PCSO arrived at Wilson's mobile home and established a perimeter around it. Deputies immediately attempted to contact the suspect with the loudspeaker on their Sheriff’s vehicles, but the suspect would not respond to their requests to come out.

Instead, according to PCSO, the suspect fired several shots with what appeared to be a small-caliber gun while he was concealed inside the mobile home.

According to Trp. Pennington, PCSO requested assistance from KSP shortly before 10:45 a.m. Post 11 then dispatched its Special Response Team to the scene.

PCSO reported that at 11:15 a.m., Wilson struck and shattered the passenger side window of PCSO Sergeant Cary York's vehicle with what they believe was a high-powered rifle. Sgt. York was standing outside nearby and not struck. Meanwhile, Sheriff Speck — using another vehicle as cover — returned fire. The suspect was reported as being concealed inside the trailer with the gun barrel pointed out the door toward the sheriff.

All efforts to get the suspect to surrender — including deputies allowing Wilson's family members to try to talk him using loudspeakers — failed to get a response from him over the course of the 8.5-hour stand off. According to PCSO, he continued to fire at random intervals at members of the Sheriff’s Office and Kentucky State Police. One such shot came from the back door at 1:52 p.m. — again in the direction of Sgt. York, who returned fire.

The Pulaski County Sheriff's Office also used tear gas as a less-lethal means to try to get Wilson to come out; however, they reported the gas had seemed not to affect him.

At 3:46 p.m., Sheriff Speck turned over the scene to KSP’s Special Response Team — which has an armored vehicle that would make it safer to approach the mobile home. During their attempts to get a peaceful surrender, Wilson again brandished a firearm and was then shot by the Special Response Team and removed from the trailer.

Somerset-Pulaski County EMS, which had had an ambulance stationed nearby since the standoff began, was brought in to treat the injured Wilson. After he was taken into custody, they transported Wilson first to Lake Cumberland Regional Hospital (LCRH) then on to the University of Kentucky Albert B. Chandler Hospital with life-threatening injuries. As of Tuesday afternoon, he remained there in critical condition according to a UK spokesperson.

KSP told the Commonwealth Journal that preliminary investigation revealed that the initial victim had brought a dog to Wilson's house, trying to determine if it was Wilson's and had gotten lost. In response, Wilson shot through the door, with the gunfire hitting the other man in the face.

According to KSP, the man was taken to LCRH with non-life-threatening injuries and is recovering at home following surgery.

A search warrant was obtained and executed on the residence, according to PCSO. Located during the search of the mobile home was a .270 large caliber rifle with scope, a .22 caliber rifle and a .380 handgun. Several spent shell cases were located inside the residence as well as live rounds. The Sheriff’s Office collected all of these items as evidence.

No charges had been filed against Wilson at press time, with PCSO reporting that felony warrants have been obtained but cannot yet be served due to his medical condition. The sheriff's office is investigating the initial shooting and expects to present the case to prosecutors for additional warrants.

KSP Post 11 and the Critical Incident Response Team are leading the ongoing investigation into the stand off.