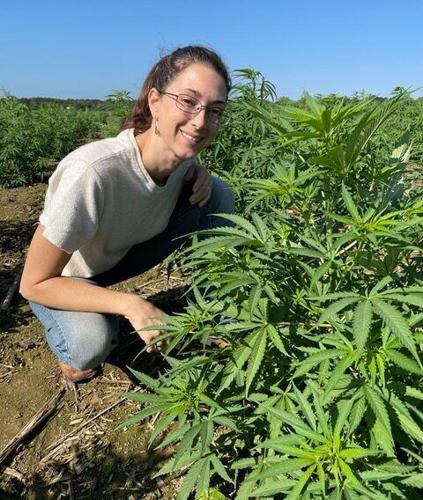 Katie Moyer is president of the Kentucky Hemp Association and owner of Kentucky Hemp Works, a seed and processing facility in Christian County. 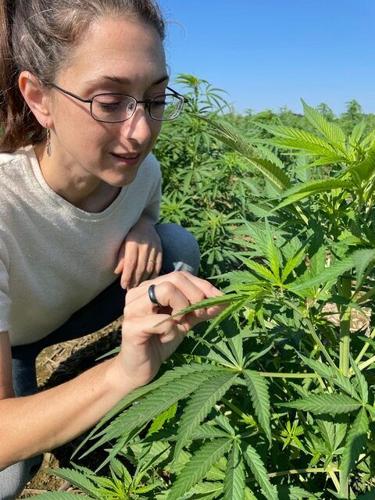 Katie Moyer checks out the progress of her plants. 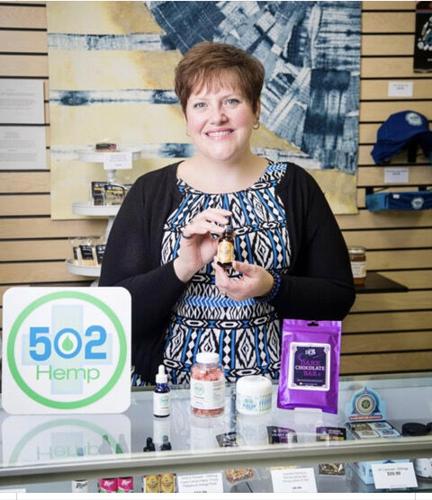 Gov. Andy Beshear’s order allowing Kentuckians with at least one of 21 medical conditions to possess eight ounces of medical cannabis was a welcome response to decades of legislative foot-dragging. The drawback: Of the 37 states where it’s legal, Illinois is the closest to fill out-of-state prescriptions.

Katie Moyer is president of the Kentucky Hemp Association and owner of Kentucky Hemp Works, a seed and processing facility in Christian County. (Photo provided)

Often called “diet weed” because it is less psychoactive than marijuana, it is legal under state and federal law. For some, it could provide relief from pain, anxiety, insomnia, seizures and other maladies lessened by marijuana use.

“Most people don’t realize that hemp and marijuana is the same plant, just lower milligrams,” said Dee Dee Taylor, CEO of 502 Hemp Wellness Center in Louisville. “You don’t have to risk driving to another state. Hemp is 100 percent legal in Kentucky.”

In response to an August court decision reinforcing Delta 8’s legality, Beshear issued an executive order for the Cabinet for Health and Family Services to propose much-needed guidelines for its manufacture, labeling and sale. The regulations, Beshear said, would “serve as a template for when the General Assembly fully legalizes medical cannabis.”

Kentucky Agriculture Commissioner Ryan Quarles has been pushing the U.S. Food and Drug Administration to regulate dosing and advertising for hemp products.

Citing thousands of accidental poisonings, the FDA and the Centers for Disease Control have issued warnings about Delta 8, including concerns that potentially harmful chemicals could be used in its processing.

“The No. 1 impediment of hemp in America is the FDA,” Quarles said. “The FDA needs to do their job and give us guidelines on what their view is on the potential regulatory aspects of CBD and other cannabinoids.”

State and federal regulations could boost Kentucky’s $43.5 million hemp industry, once heralded as a future replacement for tobacco. It is trying to rebound after overproduction, the pandemic economy and haphazard federal oversight.

Hemp products include paper, rope, textiles, biodegradable plastics, biofuel and animal feed. Most profitable now is CBD oil, which gained mainstream acceptance as a health product. The nonintoxicating oil is used in processing the Delta 8 THC, which generates the high.

“I was just as surprised as anybody else when I learned about Delta 8. I don’t even think the government knew,” said Katie Moyer, president of the Kentucky Hemp Association, about 100 businesses that grow, process and sell hemp products. “Maybe it’s a loophole, but I am not really mad about it. It’s giving people an option.”

In 2021, acting upon an advisory from the state Department of Agriculture’s general counsel, Kentucky State Police raided some shops selling Delta 8 on grounds that it was a controlled substance. The association sued the agriculture and public-safety commissioners. Boone Circuit Judge Rick Brueggemann issued a permanent injunction against charging retailers and producers with criminal activity. The association also fought back a bill to ban Delta 8.

This session, medical marijuana is understandably a legislative priority of activists concerned about health care, citizen rights and harsh drug laws. A bill passed the House last year but stalled in the Senate. Another bill proposes a 2024 constitutional amendment to allow adults to possess up to an ounce and to cultivate up to five plants.

“Kentuckians from across the commonwealth overwhelmingly support cannabis reform,” said Kungu Njuguna, policy strategist for ACLU of Kentucky. “We urge individuals to call, text, email, and/or schedule a meeting with their legislator.”

But the GOP Senate doesn’t appear eager to follow the Democratic governor’s lead during an election year. Senate President Robert Stivers said he might support medical marijuana – but only for the dying.

That means even more lives lost to opioids and other drugs that send people to morgues or prisons. As one of the top states for marijuana cultivation during the nation’s war on drugs, Kentucky should have been a leader, rather than a straggler, on marijuana reform. As once the greatest producer of hemp and now the fourth-largest producer, Kentucky could lead in pharmaceutical hemp.

The industry will get congressional attention this year during reauthorization of the farm bill.

Delta 8 should be limited to adults, with products placed behind counters and certificates of analysis on file, Moyer said.

Taylor also wants it sold in shops where consumers can be educated. “To me, this is medicine,” she said. “I don’t feel like anybody should buy a health-care product at a gas station.”

“There was a big boom and then, all of a sudden, it became hard to sell,” said Moyer. “The government would say it was a matter of supply and demand. But the demand was always there. The bottleneck was government regulation. For a new industry, we were learning as we go. And so was the government. We are building back up.”

For Taylor, hemp is more than a business; it’s a lifesaver. Her husband, John, endured five years of seizures, despite taking 28 pills a day, she said. Told by doctors to expect a low quality of life, the veteran started using CBD oil. Now seizure free, he operates a CBD processing business.

“In Kentucky, they will promote bourbon, but they won’t even fathom how much cannabinoids can help people,” she said. “I think it comes down to money. It’s typical politics.”