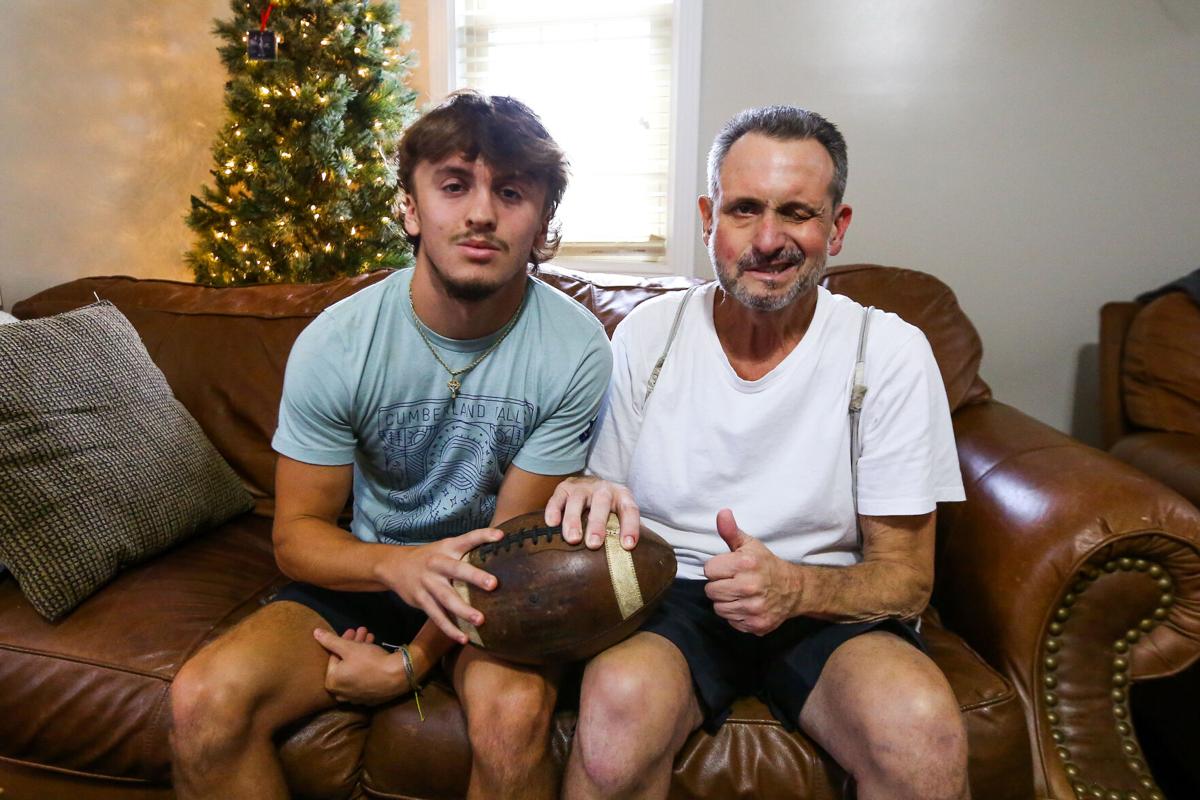 PCHS football player Cade Sullivan, left, and his father Scott share a love of the game. Scott was able to attend his son's first game of the year thanks to pilot Denny Brummett, who flew Scott to the Belfry High School game. 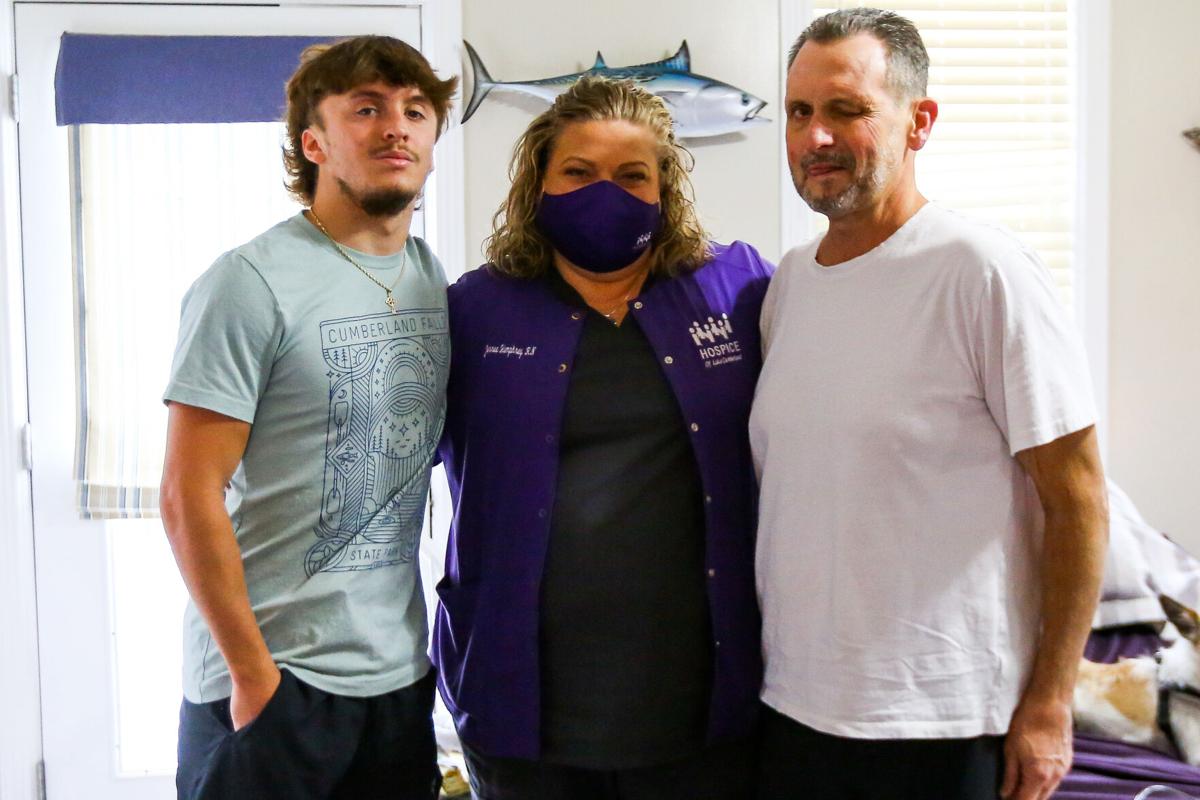 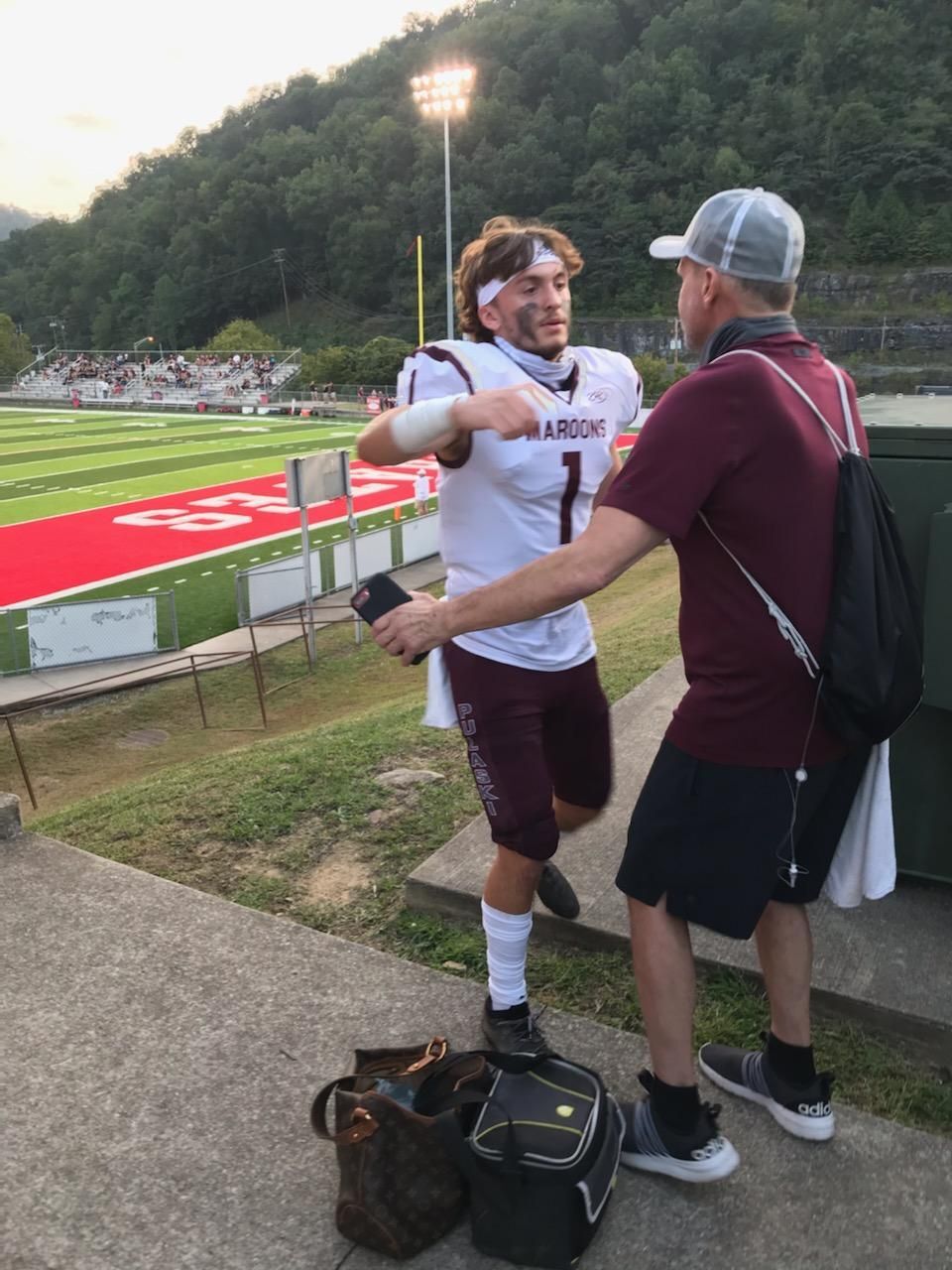 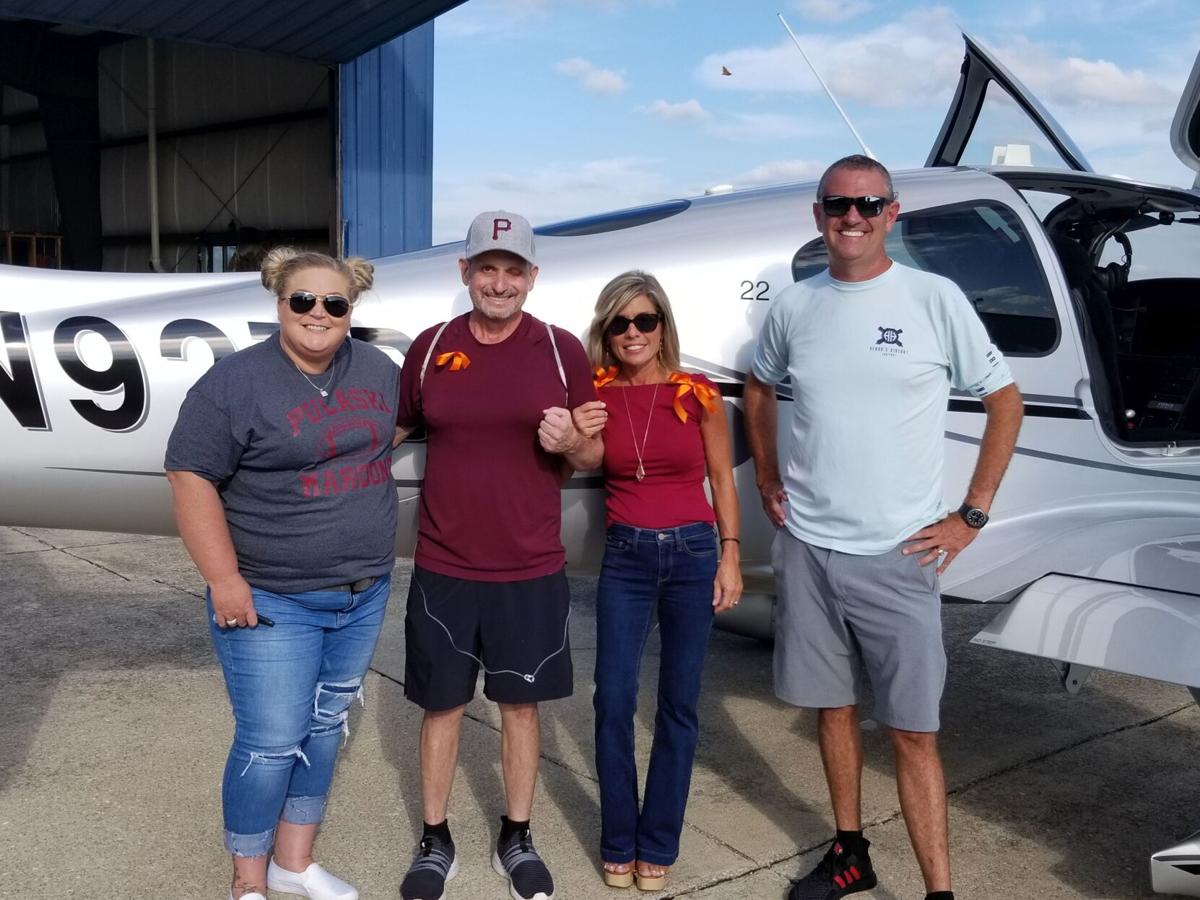 Scott Sullivan, second from left, was flown to his son's first football game of the season, a trip that would have been too long by car for the cancer patient. He is seen here with Hospice of Lake Cumberland nurse Jerree Humphrey, Scott's girlfriend Kristi Harrison and pilot Dr. Denny Brummett.

PCHS football player Cade Sullivan, left, and his father Scott share a love of the game. Scott was able to attend his son's first game of the year thanks to pilot Denny Brummett, who flew Scott to the Belfry High School game.

Scott Sullivan, second from left, was flown to his son's first football game of the season, a trip that would have been too long by car for the cancer patient. He is seen here with Hospice of Lake Cumberland nurse Jerree Humphrey, Scott's girlfriend Kristi Harrison and pilot Dr. Denny Brummett.

Life can change without warning. In the case of Scott Sullivan and his family, they are dealing with two major changes in their lives that have taken place in quick succession.

One is very negative. Scott was recently diagnosed with a rapidly-spreading cancer that has limited his remaining time on Earth. But from that, and the actions of those around him to help with one last goal, has come an extremely positive outcome. His story has gotten national attention.

And it started simply with Scott wanting to watch a football game.

The game was the season opener for Pulaski County High School, which was playing against Belfry High School. The reason Sullivan wanted to go was because his son, Cade, is one of the players.

And according to sophomore Cade, his father had never missed a game.

But the game was being played in Pike County, around 170 miles away by road.

It was too long of a trip for Scott to attempt. Battling a cancer that started in his adrenal glands, spread through his kidney and had progressed to pretty much all of his body, he would be too far away should he have an emergency or need assistance.

Through a heart-warming series of events, however, Scott was able to be flown via airplane to the game.

Scott’s ties to football in this community are strong. He played while a student at Somerset High School, and at different times he coached at PCHS and Southwestern High School.

Recently he had been working for a local company as a diabetes care specialist.

“So I was very much in tune with health and shocked when I got sick, when I started feeling this bad, because I really monitor that type of thing. It can happen to anybody,” Scott said.

The problems began earlier this year when Cade was diagnosed with COVID-19. He went into self-isolation, while Scott was quarantined to watch for symptoms.

After a while, Scott developed a headache, which got worse over the course of a few days. Then, his left eye began to droop, and he decided he needed to go to the emergency room.

“It kind of felt like a stroke-type thing,” he said.

At Lake Cumberland Regional Hospital, he was tested for COVID. The test eventually came back negative, but in the meantime he was admitted to the hospital’s COVID ward because staff could tell something was wrong with him.

During the next few days Scott’s condition grew worse. On the third day in the hospital, he started losing his voice and had trouble swallowing.

Through testing, hospital staff found a large mass on his kidney, he said.

LCRH sent him to Louisville for further treatment, where he learned that the cancer was spreading very rapidly – so rapidly that Scott began to get concerned that the tests doctors were doing weren’t keeping up with the progression of the disease.

He eventually lost the eyesight in his left eye, his hearing in his left ear, and some of the motor skills in his arm.

It soon became clear, however, that medical staff couldn’t contain the spread of the cancer.

“They said, ‘We’re putting treatment plans together for you, but to be up front with you, a lot of these treatment plans really aren’t for you. They’re for people who are coming in behind you that may have this in the future.’ So I accepted this. … It moved at breakneck speed. I’ve never seen a cancer like this move so fast in just a few days.”

He was given some radiation, and sent home to be with his family.

“If I’m able to manage a couple of radiation treatments that will help me feel better and spend some quality time with [Cade], we’ll do it,” Scott said. “And we’ll try to get a couple more days out of it. As long as what we’re spending together is good, quality time.

“If I can make one more football game, I would love to try to do it,” he said Thursday.

He was looking forward to Cade’s next game, a home game on Saturday.

But it was his attendance of the away game that has earned such attention.

When Scott came home from the hospital, he said that hospice care had been set up for him already.

Both said the two bonded over their children’s love of sports – Humphrey’s daughter plays volleyball at SWHS.

Knowing that Cade’s first game was coming up, Humphrey asked Scott if he planned to go. Scott said he wanted to, but showed her the map that said it would be a three-and-a-half-hour ride to get there.

According to Humphrey, “I said, ‘Of course you can do whatever you want to do … but you would be an awful long way from us if you start to hurt.”

He then jokingly asked her if she had a helicopter in her back yard. Sadly, she said she didn’t.

But it got her thinking, she said, and she started making contacts. She first called Kellie Baker who is the manager of the Lake Cumberland Regional Airport. She, in turn, reached out to Dr. Denny Brummett, a dentist in Somerset.

Brummett is also a pilot, and he agreed to fly Scott to the game in his airplane.

“I didn’t know Scott, but I definitely wanted to help him,” Brummett said.

He had seen Scott before, as Brummett said he believed that Scott graduated with Brummett’s brother, but the two did not have a personal connection.

Brummett added that he had not done anything like what he did for Scott, but he had always wanted to help with a similar kind of flight.

“I don’t think it was anything out of the way for me to do,” Brummett said.

Also, it was a chance for everyone – including Brummett – to get out and enjoy a night of football.

Humphrey said of Dr. Brummett, “He did a phenomenal job. No one could have done as good of a job in making it an enjoyable experience for Scott.”

Scott said the arrangements were made quietly, and he didn’t know until just a couple of days before the trip.

“We had our first game, against Belfry, and it was all the way up in Belfry, so I wasn’t really expecting him to be able to come because it’s so far away and his condition at the time,” Cade said.

“Then he got news that he could go and fly there, and it meant a lot to me.”

Scott said the 40-minute flight was shorter than the drive to and from the airports. He praised Dr. Brummett, calling him “a cool guy. He got to show me all the screens and things [in the plane]. … Dr. Brummett is a blessing.”

Scott continued: “I got to watch a great game. Got to watch [Cade] have a good performance in his first game of the year. That might have been the last game I got to see him play.”

Scott was accompanied on the flight by his girlfriend, Kristi Harrison, and nurse Humphrey.

Humphrey confirmed that Scott enjoyed the game. “He was tickled to death. He was just yelling and screaming.”

She said he was yelling, “Go Number One,” Cade’s jersey number.

Cade said his father’s presence at the game was important to him. “Him being able to be there, even in the circumstances that he’s in, and still being able to show up and support me makes me want to play two times – ten times – better than I ever have.”

Humphrey was there to support Cade, too, despite having strong ties to the cross-town team.

“I told them, ‘I can not believe I’m going to be in maroon and gray,” the SWHS graduate laughed.

Scott even went to Sports Den to get her a Maroons shirt and mask, she said.

It’s just one of the many ways that the nurse has become a part of Scott’s family so quickly. That is something she says she’s used to.

“We as hospice nurses, we go into their homes and we just become a part of their family,” she said.

“I tell my patients, ‘We’re going to be good friends.’”

She said that’s typical of everyone who works at hospice. They try to have a personal relationship with both the patient and that patient’s family, and they want to help all their patients live their best lives until the end.

“So, when you can go in and do something like this, it shows that hospice isn’t just there to help people die,” she said.

When she is at the store or out in public, and people see her dressed in her hospice uniform, she sometimes gets asked if it is a depressing experience. “I tell people I am beyond blessed every day.”

Scott said of his hospice experience, “They’re so professional. They’re here on time. They’re here when I need anything. If something goes wrong, it’s amazing how quickly they’re here to fix it. They have a calming sense.”

He said he also has a good support system among the community.

“I’ve had a lot of support. My friends’ support. My girlfriend Kristi, she’s really helped a ton with support here ... she’s spent days and days and days just trying to help me on the weekends. I was worried about her own personal life and child, because she had a lot of work to do. My ex-wife (Cade’s mother, Katrina Smith), she comes here, and she works during the day, helps watch out and makes sure somebody’s here if something goes wrong. She does an amazing job.”

None of the players in this story expected the kind of reaction its telling received.

Brummett said that after it was featured on CNN, he has heard from people all over the country. “I’ve gotten emails from New York, New Jersey, Texas,” he said.

Humphrey added, “I hope this will inspire someone to do something nice for someone else.”

The experience has brought Scott and Cade closer through their faith, as well. Cade said he has been doing devotionals every day.

Scott said, “He read such a nice devotion the other night, and I was so proud of him.”

Cade added, “Me and my dad have a Bible verse that we read all the time. It’s kind of between us two. We just want something that [only] we have.”

Scott said he hopes their story helps inspire others. “I know this is bad, but maybe something good can come out of it,” he said.