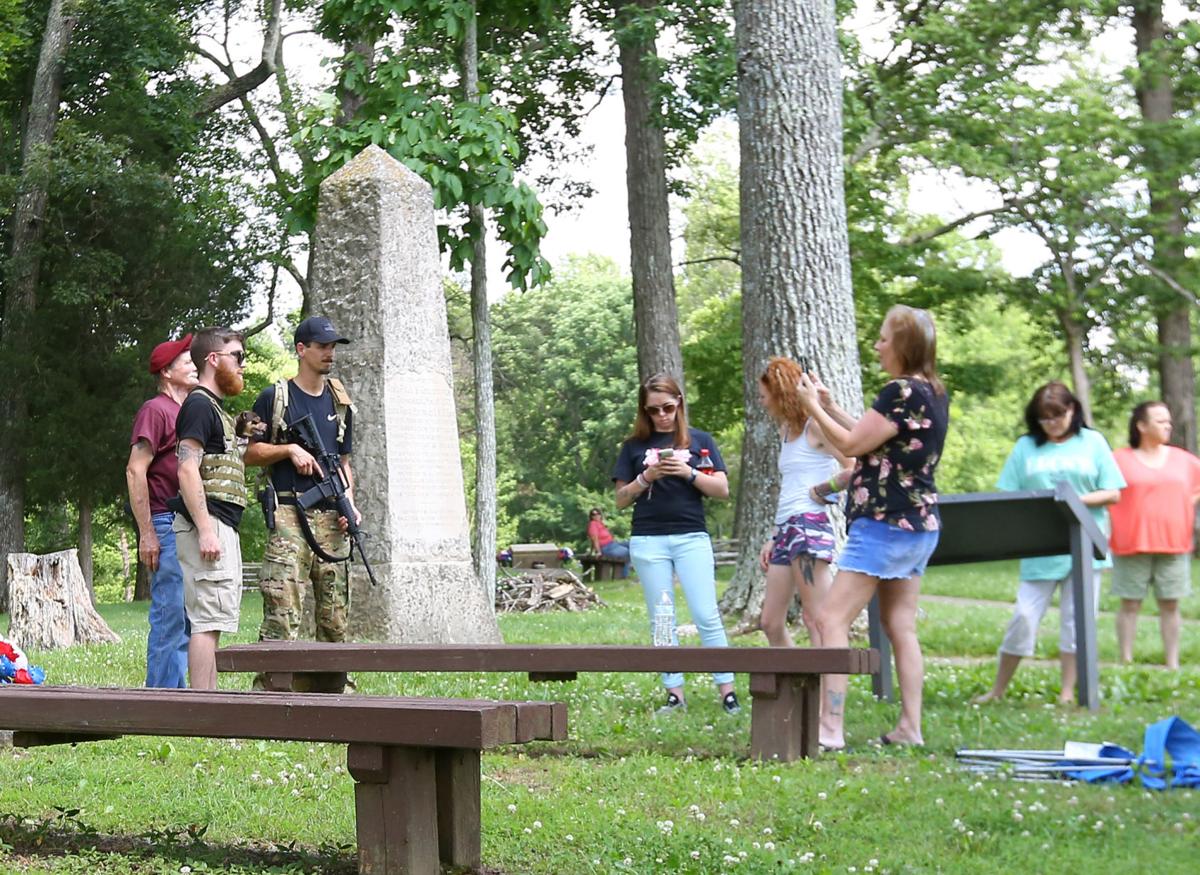 Around 100 individuals, many of them armed, gathered at the Zollicoffer Park battlefield site in Nancy to protect monuments there against the rumored threat of protestors intent on causing damage there. 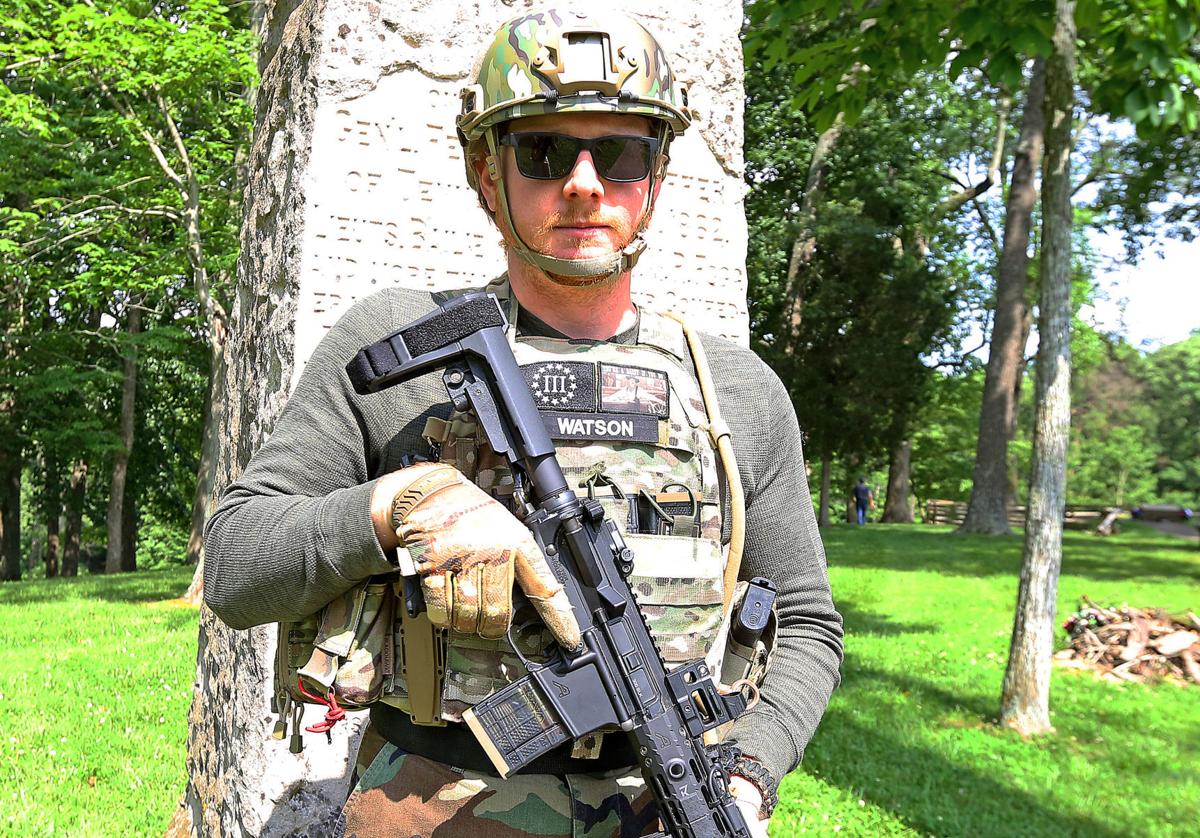 Levi Watson of Nancy, dressed in armor and carrying an AR-15 he built himself, was one of those gathered at the Zollicoffer Park battlefield site in Nancy Friday to protect against the threat of protestors intent on vandalism of the Confederate monuments there. 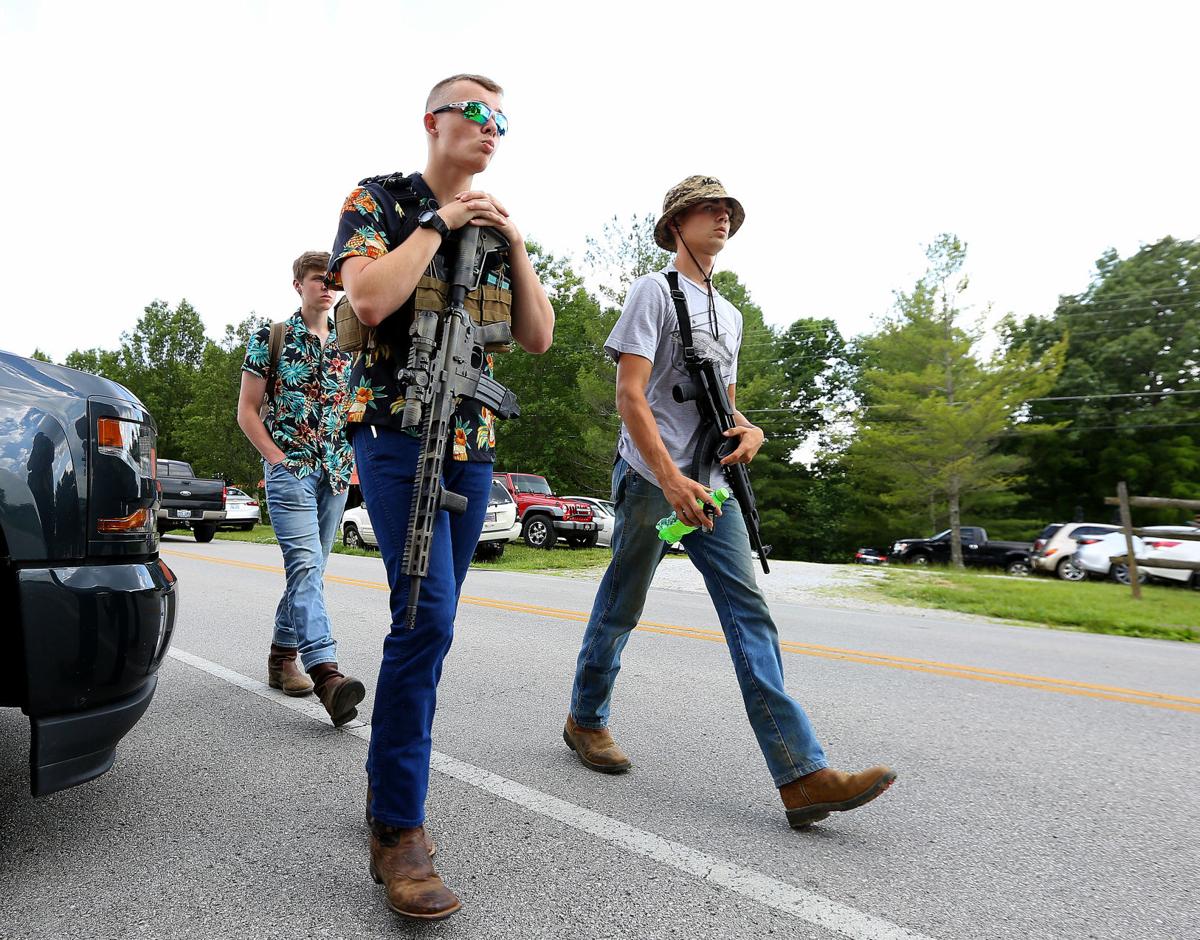 Many of the individuals who showed up to Zollicoffer Park throughout the day were carrying firearms. Cars were parked all along Ky. 235 in the Nancy area, and others were at the Mill Springs Battlefield Museum on Ky. 80. 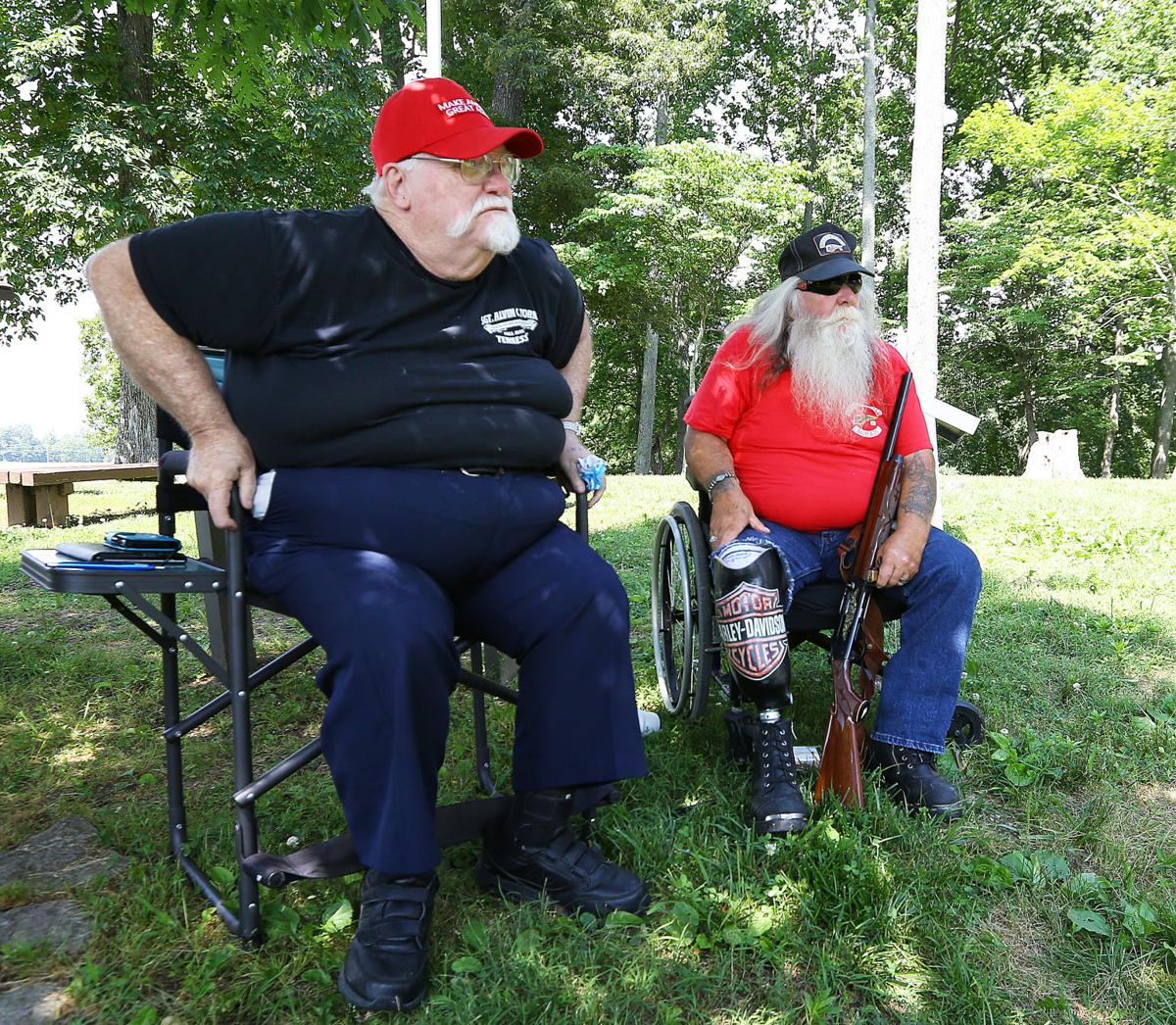 Around 100 individuals, many of them armed, gathered at the Zollicoffer Park battlefield site in Nancy to protect monuments there against the rumored threat of protestors intent on causing damage there.

Levi Watson of Nancy, dressed in armor and carrying an AR-15 he built himself, was one of those gathered at the Zollicoffer Park battlefield site in Nancy Friday to protect against the threat of protestors intent on vandalism of the Confederate monuments there.

Many of the individuals who showed up to Zollicoffer Park throughout the day were carrying firearms. Cars were parked all along Ky. 235 in the Nancy area, and others were at the Mill Springs Battlefield Museum on Ky. 80.

On most days, the rolling green hills at Zollifcoffer Park off Ky. 235 in Nancy are quiet, empty. The sound and sight of firearms are only echoes from the past, imaginative glimpses of what took place at the site over 150 years ago.

On Friday, however, the Civil War battlesite was far from empty — and its inhabitants armed and ready.

A large crowd of people gathered at Zollicoffer Park Friday afternoon in anticipation of a possible protest against the monument and graves recognizing fallen Confederate soldiers located there, with concerns that activists may try to deface or destroy those markers.

"I'm out here for one reason: Our people died and are buried here," said Michael Redman, a citizen of Nancy, who arrived with his handgun concealed on his person. "I'm here to see that nobody interrupts any graves. It's happened throughout our country. It's the past; let the past lie."

As of 4:30 p.m., there were around 100 individuals at the battelfield site, and even more in the parking lot at the Mill Springs Battlefield Museum on Ky. 80, where a law enforcement presence was also camped out to keep a watch for any sign of what had been suggested: Protesting groups or even members of the Antifa organization busing in members to the area.

However, according to those same law enforcement sources, there was no credible intelligence to suggest outside protestors were targeting any venue in Pulaski County.

Kentucky State Police Commander Todd Dalton — who was on the scene — told the Commonwealth Journal Friday afternoon, "We have heard nothing but rumors that have been circulating on social media. I really think it's just a rumor that kept growing and changing — and now you have people who are very concerned. Some citizens are out here just wanting to make sure the monuments don't get damaged — but we have no credible intel that any protesters are coming."

"The sheriff has spoken with them," Hancock said. "As far as outside groups coming in, we've heard rumors like everyone else."

Rumors had spread over local social media in the preceding days about the possibility of a demonstration at the site with the intent to do damage to the monument recognizing the spot where General Felix Zollicoffer fell. The first Confederate general to die in the western theatre, Zollicoffer was shot and killed on January 19, 1862 during the Battle of Mill Springs.

Conditions were hazy and soldiers could not see — leading to Zollicoffer's infamous death, as he approached what he thought was one of his fellow Confederates to talk about the situation; it turned out to be Union Col. Speed Fry, who, according to accounts, then shot Zollicoffer.

A custom of remembering the lives lost and blood shed there at the battlefield was born with Dorotha Burton in 1902, when the little girl began putting wildflowers on the mass graves and decorating what was then a large white oak tree — the "Zollie Tree" which was felled by lightning 24 years ago —with an evergreen wreath. It was a custom she continued for 45 years, and lived on after her. An annual Remembrance Ceremony began with the formation of Mill Springs Battlefield Association in 1992, and members of the community have shown a personal investment in the site's upkeep over the years.

"In 1972 ... when we came to Zollicoffer Park, the only thing that was here was the monument for Zollicoffer and the mass grave monument," said Susan Elmore, who has told Burton's story in Somerset numerous times. "There were no markers. People were using it as a garbage dump. ... Greg Walden and his brother Jeff were members of our first reenactment group. (Greg) did a lot of research of records of who was here, who died, and who answered muster call after this battle was over (to place headstones at the site). These stones were dedicated and given to this battlefield, the way I understand it, by Sons of the Confederate Veterans ... but there is no one actually buried there."

Susan Elmore's husband Don, a retired history teacher at Somerset High School, was among those on social media expressing concerns about potential damage at the battlefield site. He said that as he understood it, the Battlefield Museum was on alert that a "problem" was "possible" there, and that there might be be vandalism at the Zollicoffer site as well.

"They're having this Juneteenth celebration (in downtown Somerset), celebrating the end of slavery, which is a major mile-point for history," said Elmore. "I appreciate all history. This should be recognized, the end of American slavery, and I admire them for doing it. The trouble is, when they have peaceful demonstrations and festivals and things like that, it draws in the negative people on both sides. Those people are not under the control of the sponsors of the events, and it's sad that the angry element of our population comes out."

Elmore said he believed it was "a pretty good possibility" that there could be some threat to the monuments there at Zollicoffer Park.

"These people have turned out as a precaution," said Elmore. "The police presence is confirmation that something is possible. It's kind of like having a conceal-and-carry license. It's something you get, but you pray you never use it. And so we've got people out here in the park, and we hope nobody shows up.

"I've got mixed emotions," he added, referring to the large turnout. "I'm happy about it, but I'm sad that they feel they need to be here. This whole thing should not be going on."

While Elmore was parked in a lawn chair under a tree's shade, others roamed the grounds with weapons in hand. Firearms large and small were openly handled as people at the site socialized and laughed with one another in groups, or even ate pizza as they waited for something they hoped wouldn't come. Several declined to talk to the Commonwealth Journal; while there was talk of a specific militia being present, that couldn't be confirmed in talking to the individuals present.

However, Levi Watson was dressed to catch one's eye. Sporting a full camo outfit of protective gear, complete with vest and helmet, with a legally suppressed AR-15 strapped across his chest, Watson, a resident of Nancy, might have looked ready for battle, but like others, was there chit-chatting with fellow supporters of the cause and exhibiting a polite demeanor with the reporter on the scene.

"I was here (Thursday) night from 7 p.m. to about 12 a.m.," he said. "The reason I'm here is because I heard they were supposed to be trying to burn the Zollicoffer tree and tear down some monuments. The thing is, the field's just been cut, and it's all dry. There are a lot of houses around here that are going to burn if they burn the Confederate campsites, if they burn the Confederate field hospitals. Those fields are going to go up (in flames), so are the people's homes around here. So for me, it's more about the community.

"I understand the complaint that you don't want your tax dollars funding the upkeep of a monument you don't support," he added. "I understand that kind of a complaint. I do. That's something that can be peacefully protested, and I believe that's a very American thing to do, but when it gets to rioting and violent protesting, then that's another story. Then you're affecting citizens, and you're affecting the community."

As for his outfit, Watson noted that "nothing is for show" — indeed, he said that as an American, it's important to him to have the latest armor and weapons of the times, "as any other man in any other time would have done." Instead of a sword or shield, he noted, he carries his AR-15 — which he built himself. He said he was once a part of the militia group known as the Three Percenters, but left the organization after disagreeing with some of their political views.

"For the goal that's needed for that type of an organization, it shouldn't be as much one-sided. There should be more dissenting views, more of a centrist sort of idea to bring in people from all colors of life," he said. "So I left the Three Percenters organization that is now in Kentucky — that particular organization is not nationally recognized; they could have been, but they decided not to be — so I am part of the nationally-recognized Three Percenters, just not of the particular chapter that's here in Kentucky."

Speaking about the importance of historical monuments, Don Elmore talked about how Union and Confederate veterans joined together at reunions and raised money for markers on both sides.

"And here 150 years later, we have people who are mad, when those people made peace," said Elmore. "(The monuments) are maintained and decorated today with good intentions and prayers and respect. And now we have people taking them down, without respect. When I taught school, I taught respect for all sides, even the sides I didn't agree with. So it's a very confusing time right now. I'm seeing things I never dreamed would occur."