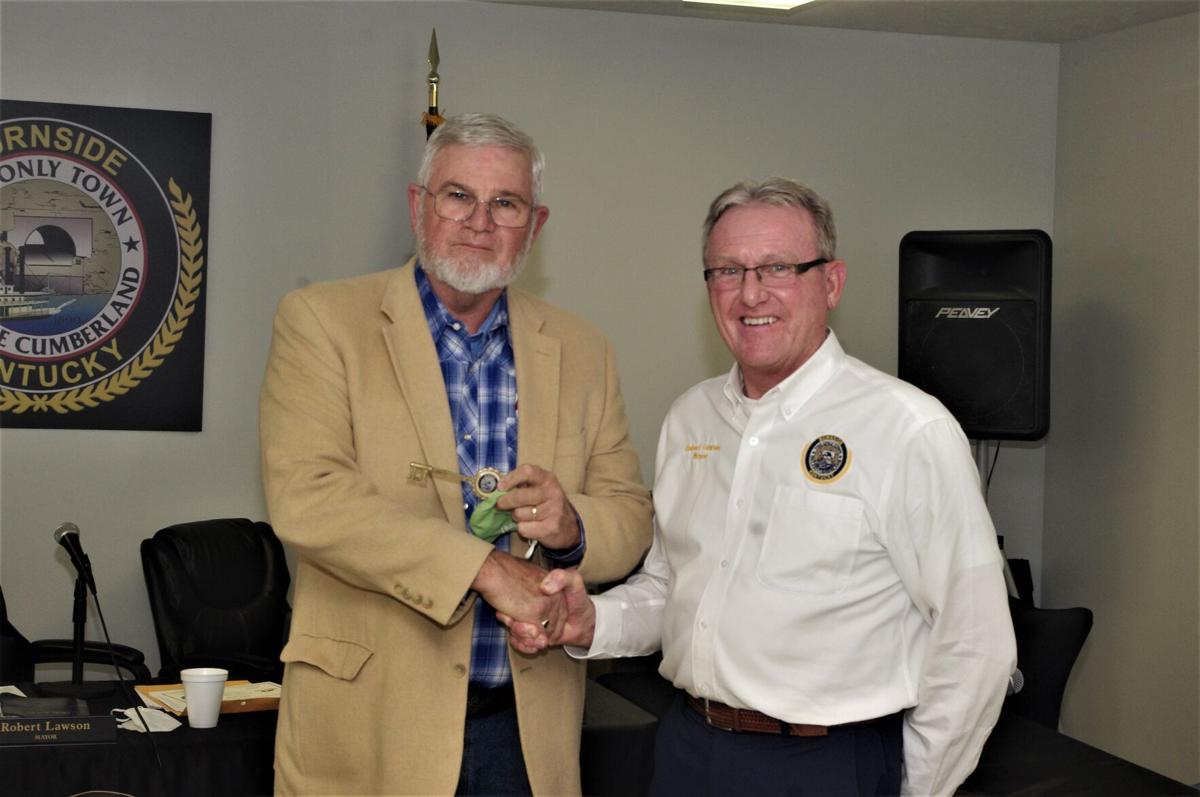 George Flynn was honored by Burnside Mayor Robert Lawson and City Council with a Key to the City for his donation, labor and overall efforts at Cole Park, with stage construction and parking lot work. 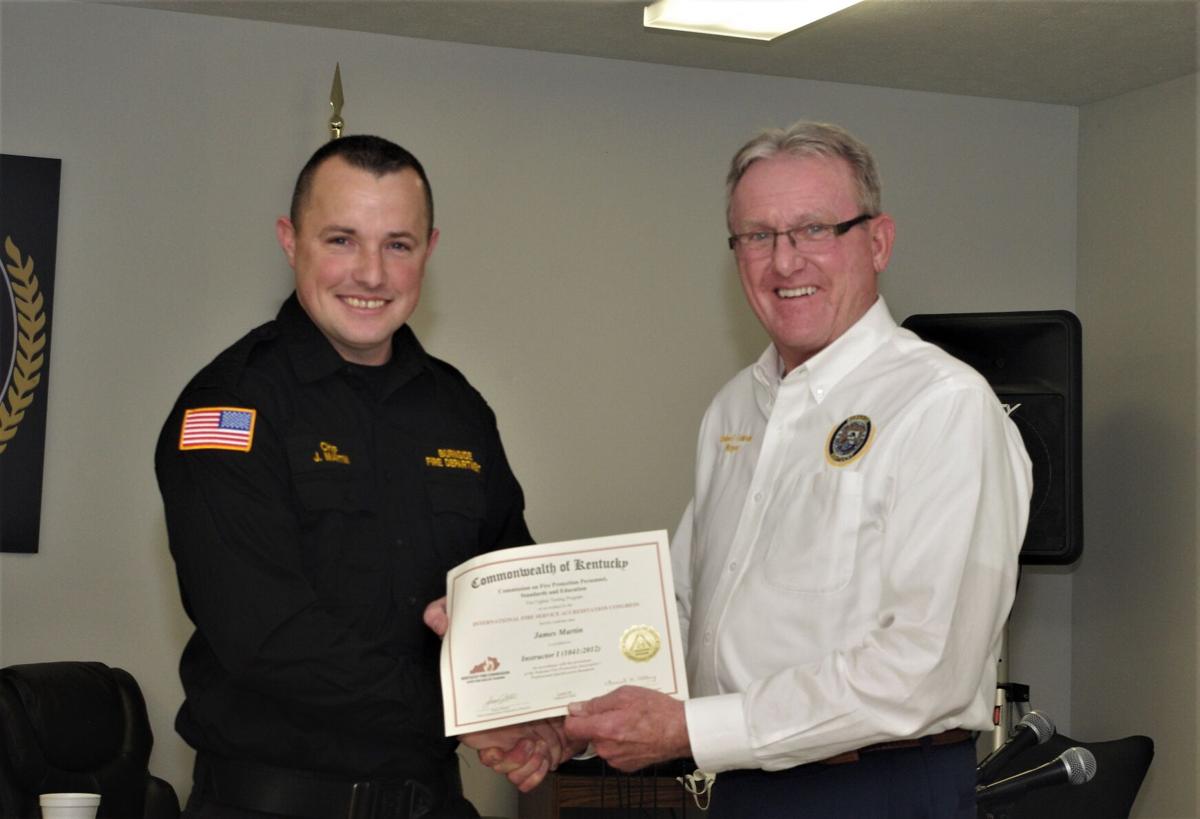 Burnside Fire Chief James Martin was recognized by Mayor Robert Lawson and City Council for his certification as a Fire Training Instructor.

George Flynn was honored by Burnside Mayor Robert Lawson and City Council with a Key to the City for his donation, labor and overall efforts at Cole Park, with stage construction and parking lot work.

Burnside Fire Chief James Martin was recognized by Mayor Robert Lawson and City Council for his certification as a Fire Training Instructor.

Performers are used to having disasters on stage. It’s rarer for the disaster to take place with the stage itself.

The City of Burnside is working to rebuild its new performance venue at Cole Park, the Don Franklin Performance Stage. after it was recently taken down by strong winds.

Burnside Tourism Director Frank Crabtree, Jr. addressed the repairs at the December meeting of the Burnside City Council this week.

“It just fell over because it wasn’t braced (properly),” Crabtree told the Commonwealth Journal.

Indeed, volunteer work had been done on the stage the previous day, back in late November. But not everything had been able to be completed by the time the weather brought in powerful gusts of wind, and the structure essentially collapsed.

“The positive way to look at it is that it’s a chance to change the design and rebuild it from the ground up,” said Crabtree.

The roof structure for the stage was being built on the back end of the newly-created parking lot beside City Hall. The makeshift stage set up in Burnside’s Cole Park for the “Thunder Over the Island” Labor Day event back in September served its purpose, but with the city looking at holding more such events there in the future, Burnside was hoping for a more permanent facility.

Crabtree, who has experience in construction, said that it will likely cost about $3,000 all told to rebuild the structure, with most of that allocated out of the city’s tourism budget. That includes both labor and material, which will utilize pre-engineered trusses, with a calculated weight load.

“I’ve never built something without engineered trusses,” said Crabtree, “because they’re engineered to be stronger and lighter.”

Burnside Mayor Robert Lawson said the work would be done “in the near future.”

In other Burnside City Council business:

• Lawson reported Cleary Construction out of Tompkinsville, Ky., has now replaced both water pumps serving the city’s water plant. Lawson had previously noted that one of the pumps was out of use, and both were 30 years old, so it felt like the right time to go ahead and change both, said Lawson. Now, both are operational and are “working great,” he said.

• The bit of property off of East French Avenue in need of cleaning up — a lt known as “the old Boy Scout Property” and referred to in many meetings over the years — finally officially belongs to the City of Burnside. “We can start cleaning it up next spring,” said Lawson, who noted that the city is looking at putting a maintenance building and possibly some storage structures there.

“We’ve had it surveyed, we just need to go over and look at the area to see if it’s feasible to put a building on it,” said Lawson.

• Pulaski citizen George Flynn was given a ceremonial key to the city for all the volunteer work he’s done to help the city, of which he is “a friend,” noted Lawson. Also receiving keys to the city were outgoing city councilors Mike Lynn and Brandon Becker.

• The council considered a request by Burnside Little League President Danny Bray to put in a community center and indoor batting cages at Cole Park, likely in place of the old tennis courts. Lawson said they’d meet for a work session in January to figure out a long-term lease agreement that’s feasible for both the city and the Little League organization.

Kenneth Joel Stevens, age 82 of Somerset, passed from this life unexpectedly on Tuesday, March 2, 2021 at his residence. He was born on February 11, 1939 in Somerset, Kentucky, son of the late Kermit R. Stevens and Alice Hardwick Stevens. Kenneth was a City of Somerset employee with the Sewe…

Billy Rice, 86, of Nancy, passed away Friday, March 5, 2021 at Hospice of Lake Cumberland Jean Waddle Care Center. Services are pending at this time. Lake Cumberland Funeral Home is entrusted with the arrangements for Billy Rice.