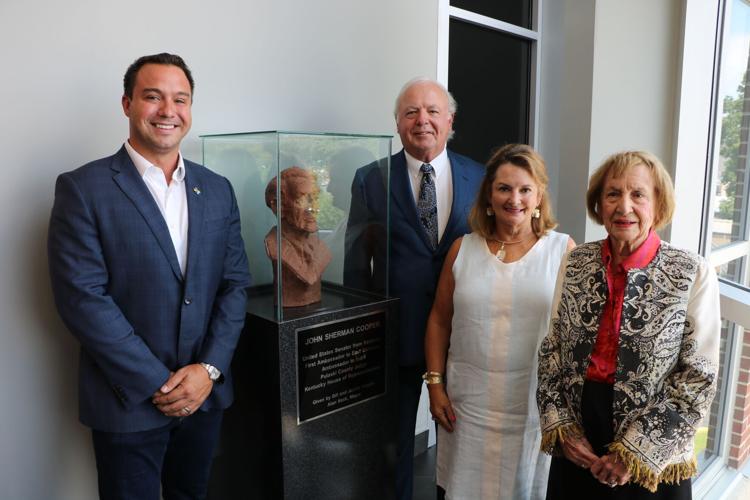 Among those gathered to see a bust of John Sherman Cooper donated to the Energy Center were, from left, Mayor Alan Keck, Bill Turpen, Janice Turpen, and Cornelia Cooper. 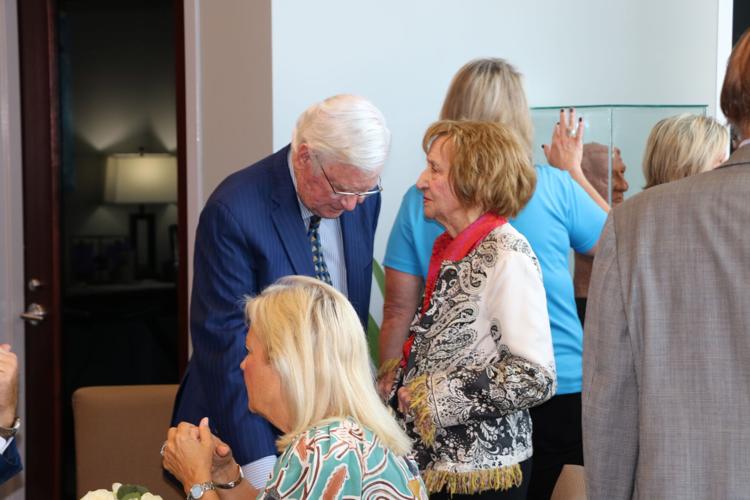 Among those gathered to see a bust of John Sherman Cooper donated to the Energy Center were, from left, Mayor Alan Keck, Bill Turpen, Janice Turpen, and Cornelia Cooper.

Those who turned out to Tuesday’s unveiling of the clay John Sherman Cooper bust at Somerset’s city hall shared stories and memorials to the late U.S. senator.

Many dignitaries – from current U.S. Congressman Hal Rogers to judges and local officials — created a standing-room-only feel to the third floor of the Energy Center.

The bust itself was the star attraction, but many took time to honor Cooper’s sister-in-law, Cornelia Dozier Cooper, who was also in attendance.

In introducing the speakers, Somerset Mayor Alan Keck talked about how special Cornelia Cooper has been to him.

“Her entire family has been so gracious to us. I was elected as a young man, a young mayor, and she’s always been so encouraging. Also in many ways [she’s] paved the way for what we’re seeing come to fruition in this community, which is a community that promotes art and entertainment in a historic way.”

Cornelia Cooper said she was pleased with the way John Sherman Cooper’s bust is displayed – with a glass box and pedestal holding a plaque dedicated to the senator.

She told the crowd a story about when John Sherman Cooper was an ambassador to India.

“India was trying to decide whether to become a democracy or a communist country. and China was sitting right behind them,” Cornelia Cooper said.

The Somerset-born statesman Cooper took the time to become friends with India’s prime minister, she said. “I feel like John Cooper had a whole lot to do with India becoming a democracy and not a communist country.”

Congressman Rogers had his own personal anecdote to tell about Senator Cooper, from when Rogers was first starting out as a lawyer.

Rogers said he was asked to pick up Cooper at the Lexington airport, and when he did he noticed one of the lenses in Cooper’s glasses was gone. Rogers said he wasn’t sure whether to mention it.

“Finally, I said, ‘Senator, can I take you by the optometrist’s office when we get to Somerset?’ He put his finger through the hole and discovered it was gone. and he said, ‘No, just take me to the five and dime store,’” Rogers said.

Cooper went in the store and went up to where the glasses were displayed. “He picked out one for $1.99, and he was in business,” Rogers said.

One of John Sherman Cooper’s nephews, Frank Cain, was also on hand to share his thoughts, but said that rather from personal experience, his information came from Cooper’s Wikipedia entry.

Cain said that when Cooper was a young man, Cooper’s uncle Roscoe Tarter told Cooper that he was going to run for Pulaski County Judge. He won, but began his career in the middle of the Great Depression.

As judge, one of Cooper’s jobs was to issue evictions, which Cain noted Cooper did not want to do. Although he performed his job, Cooper was known to help evicted people to find new places to live and would try to give them his own money.

“They’d say he’d reach in his pocket and he’d pull out a quarter,” Cain said. Due to that, Cooper became known “the poor man’s judge.”

The bust was bought several years ago by Somerset residents Bill and Janice Turpen.

Bill Turpen explained that his wife is on the Kentucky Arts Council, and several years ago Somerset played host to the council. Someone that the Turpens met through that encounter told them about the bust being for sale, and Bill Turpen said the family decided to buy it so that it could be in Somerset.

However, after buying the clay model, Bill Turpen said they rethought the idea of keeping it in their home.

“We said, ‘We really don’t need this here, we have grandkids that could knock it over,’” Turpen joked. The couple decided to donate the bust to the City of Somerset, with officials deciding to display it outside of the Mayor’s office.

Both Bill Turpen and Congressman Rogers said they felt the bust had found an appropriate place.

Rogers said of Cooper, “He’s beloved, he made us proud – still does – and he provided us inspiration and an appreciation of what’s worthy of public attention.”

'He’s beloved, he made us proud – still does – and he provided us inspiration and an appreciation of what’s worthy of public attention.' — Congressman Hal Rogers on John Sherman Cooper.