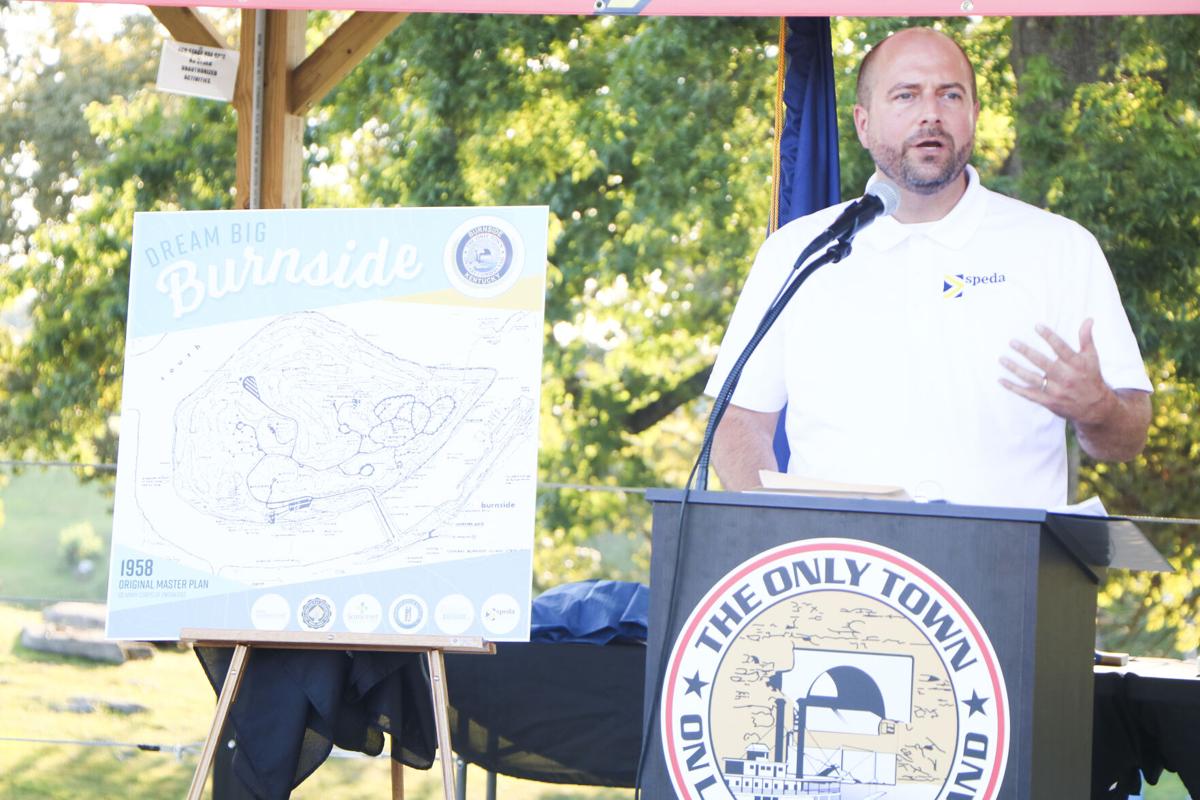 Dream Big Burnside Authority Chairperson Chris Girdler speaks at Tuesday's announcement about the partnership between his organization SPEDA and the City of Burnside to develop Burnside Island. 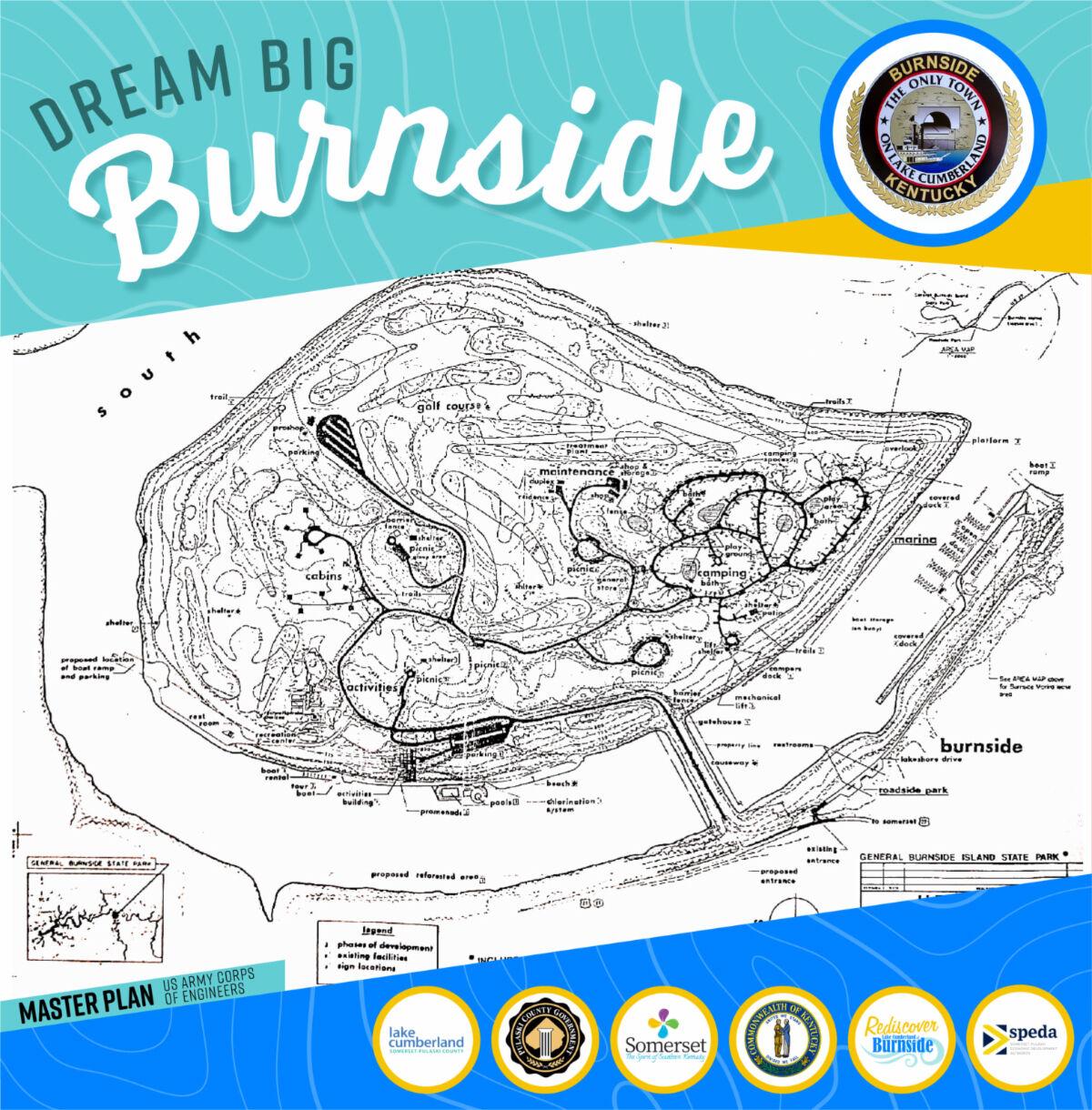 A map of Dream Big Burnside plans for Burnside Island, as provided by SPEDA.

Dream Big Burnside Authority Chairperson Chris Girdler speaks at Tuesday's announcement about the partnership between his organization SPEDA and the City of Burnside to develop Burnside Island.

A map of Dream Big Burnside plans for Burnside Island, as provided by SPEDA.

For years, there’s been local chatter about the development of General Burnside Island, the possibility of putting a lodge there, of maximizing the area’s resources to their potential. Those efforts would come and go, with little or no success.

But in the age of SPEDA, things are different. The Somerset-Pulaski Economic Development Authority has made an immediate impact in over two years of existence, and now they’re teaming up with the City of Burnside to achieve those long-held dreams for Burnside Island State Park.

The public unveiling of the “Dream Big Burnside” project and naming of members of the Dream Big Burnside Authority board was made Tuesday outside of Burnside City Hall, at the Don Franklin Performance Stage at Cole Park.

A joint effort between the City of Burnside and the Somerset-Pulaski Economic Development Authority (SPEDA), the Dream Big Burnside Authority will seek to enter into an agreement with the Commonwealth of Kentucky to add a lodge, restaurants, a conference center and other amenities to the property through a public-private partnership, according to local officials.

“Today is truly a historic day — it is one that quite frankly, many would say is a little long overdue,” said Chris Girdler, both the President and CEO of SPEDA, as well as the chairperson of the Dream Big Burnside Authority. “I want to commend Mayor Robert Lawson and the Burnside City Council in particular for their desire to dream big and to work together to realize Burnside’s full potential as a tourism destination. Their willingness to create this special entity ... is going to allow us to vigorously, vigorously pursue such opportunities going forward. I’m honored just to be a small part of such a great group of community-minded individuals.”

The name “Dream Big” is more than it appears at first glance; the word “Big” in this case stands for “Burnside Island Group,” said Girdler. Much of its inspiration, however, lies further south: Lanier Islands, around Lake Lanier in Georgia, the state’s largest lake. Lawson, Burnside Tourism Director Frank Crabtree, Jr., and others took a trip to Lake Lanier, which is also a U.S. Army Corps of Engineers lake and state park like is in Burnside, and whose development was accomplished through the kind of state-local partnership Burnside is seeking.

“We came away with some great ideas and put the wheels in motion,” said Lawson. He said that Lake Lanier area officials essentially handed over their “playbook” to Burnside and encouraged the local team to use any of the Georgia location’s development strategies that they wished.

“Lanier Island has it all,” said Lawson. “They have a huge lodge, they have the entertainment, it’s more recreational around the lake and then the lodge is back up away from the lake. It’s built up high so you can see the lake. ... They have their marina. It’s got everything there that we’d like to see over at the island. We want to see some restaurants on the water. We want to see some boat rentals. We’d love to see a pool. We want the beach to come back. We’ve got a vision but what we want to try to do is sell that vision to these investors, and hopefully we have several that look at it and we find the right fit with the right investor.”

Girdler said that the plan allows the Authority to issue an RFP (Request for Proposal) “and then developers are about to tell ... the Dream Big Authority what they’re willing to do, what kind of development are they willing to bring” to the area.

Lawson said that there are other development options besides just Burnside Island. He also said that they want to “protect” and “enhance” Burnside Island and what’s already there, particularly the camping, golf course, and boat ramps. As such, those involved in this project made an effort to secure more acreage to develop.

Officials said the next step is to pursue a written agreement with the state to formalize a state-local partnership to develop the island. Burnside will soon have an option agreement to purchase a 63-acre property overlooking the island, which could be developed with recreation and lodging amenities along with the rest of the property.

Lawson was able to appoint six citizens members himself, and also appoint from member options offered by Somerset Mayor Alan Keck, Pulaski County Judge-Executive Steve Kelley and by SPEDA. Those members, many of whom were present at Tuesday’s announcement (which also included a quick special-called Burnside City Council meeting to approve the ordinance forming the authority) include:

Eaton was chosen from the Pulaski County Government’s offerings, Allen was from Keck’s selections, and Girdler was the SPEDA selection.

“A lot of time was spent in developing this board. We didn’t just pick nine names out of a hat,” said Lawson. “We tried to get a diverse (make-up); we’ve got an attorney, a CPA, we’ve got businesspeople, we’ve got investors on here. So we’ve got a lot of knowledge sitting right over here.”

Several of these individuals shared their thoughts at the announcement, including Casada, Hardy, and Godby, expressing how pleased they were to be a part of the Dream Big Burnside project.

For Allen, it’s a key way to bring things to the Lake Cumberland area that will make it an even more popular tourist destination for the Somerset-Pulaski County Convention and Visitors Bureau to promote.

“We already have a great impact on the state, because of Lake Cumberland,” Allen told the Commonwealth Journal. “Anything that we can add to the lake and to our region is going to be a bonus for everybody, not just Somerset, not just Burnside, but it’s going to help all five (lake) counties and the Commonwealth of Kentucky. People are going to start looking up Burnside ... and say, ‘Oh, it’s in Kentucky. So let’s go spend our money in Kentucky.’

“Offering something that’s on the lake, somewhere to stay, somewhere to eat, somewhere to do some outdoor recreation even if they don’t have a boat, it’s going to be top-notch for everybody to come visit us,” she added, noting the potential a dining experience on the island could have. “(Restaurants) are our no. 1. When people are visiting, they look for food first, then it’s lodging, then it’s recreation, but we want to find the food first. ... Any time someone is thinking, ‘Oh, I’ve got to go to Lexington, I’ve got to go somewhere else,’ we are going to have it here.”

Girdler said the Authority would “aggressively pursue” the vision laid out for Burnside Island in 1958, when the U.S. Congress transferred the title for Burnside Island to the Commonwealth of Kentucky to create a public park. The first phase of development for the island including camping, picnicking, golfing, and a swimming pool — all aspects that were realized. But a second phase would include “a central building, eating and sleeping accommodations, and the like,” according to a letter from the state’s commissioner of conservation at that time. Efforts to put a lodge there have not been realized over the years, but Girdler confirmed a lodge is something that the Dream Big Authority is absolutely aiming to achieve.

“Over 60 years later, the island continues to resemble the first phase of that vision, but Dream Big Burnside ... is now gearing up to pursue that second phase Gov. (A.B. “Happy”) Chandler laid out so many years ago,” said Girdler. “Conditions have changed with the leadership and the vision of Mayor Lawson and the Burnside Council ... So many of these leaders have determined that the time is right — the time is right now, to deliver on Congress’ as well as Kentucky’s original intent for Phase 2.

“With the Dream Big Authority, we never want to be in a place where we don’t try something because of fear of failure,” added Girdler.

He noted that the Dream Big Authority “provides the most efficient and effective method of developing and overseeing the island and the surrounding areas, it protects Burnside’s interests, and it is a proven model of success.”

Lawson said that when he took office as mayor in 2017 (and he confirmed that he would be running again for re-election next year), one of his goals was to make the very announcement he did on Tuesday.

“Burnside is rich in history and is a beautiful place to live,” said Lawson. “... I am so thrilled to be taking the first steps in making Burnside, the only town on Lake Cumberland, a complete destination for visitors. Our island is a beautiful outdoor gem in southern Kentucky. We want people to be able to stay here, eat here, play here, and enjoy everything it has to offer. Further development of the island will give them that opportunity while significantly boosting our local economy.”

When talks of further developing the island resumed over a year ago, SPEDA and the City of Burnside engaged P3 (Public-Private Partnership) specialists Frost Brown Todd LLC in Lexington to help move the project forward. The firm reviewed prior litigation threats from an heir of one of the island’s original landowners and found the claims are without merit, said Girdler. Hardy and attorneys from Frost Brown Todd have continued to work together to secure the legal viability of Dream Big Burnside’s mission.

“Without question, without a moment’s hesitation, I can say without fear of contradiction, that should any kind of a legal challenge come, that will be a failing endeavor by whoever may recklessly pursue such,” said Girdler.

Lawson said there are “some legalities” to go through — “We know this has to be blessed by the state” — but is confident in all the pieces falling into place.

The mayor thanked Fifth District Magistrate Mike Strunk in particular for helping make the project possible, as well as all the others involved in helping Burnside achieve its big dreams.

“This is yet another way we are collaborating to make our corner of the state shine a little brighter,” said Keck in a statement. “I greatly appreciate Mayor Lawson for bringing Somerset into the fold so that we can work together to give visitors of The Capital of Lake Cumberland an outstanding experience.”

Added Kelley, “(Burnside has) suffered difficult times since the Wolf Creek Dam repairs, and the severe loss of tourism revenue as a result. Now they appear to be moving full steam ahead, and I’m thrilled to see Burnside Island State Park entering into a bright new future!”