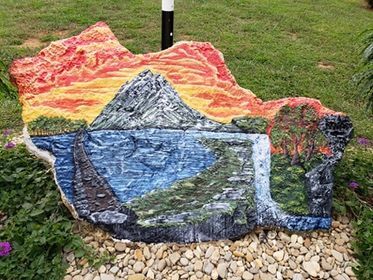 Melissa Heseman finished painting the nature scene on this rock in late September, waiting until the weather cooled a bit to do the work. 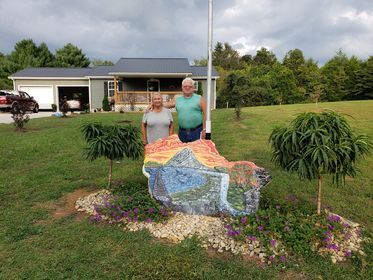 Eddie and Emma Smith outside their Ashurst Street home with the limestone rock painted for them by friend Melissa Heseman. “Good conversation piece,” said Eddie Smith of the decorated rock.

Melissa Heseman finished painting the nature scene on this rock in late September, waiting until the weather cooled a bit to do the work.

Eddie and Emma Smith outside their Ashurst Street home with the limestone rock painted for them by friend Melissa Heseman. “Good conversation piece,” said Eddie Smith of the decorated rock.

A painted rock in exchange for a mowed lawn?

That’s the trade two Somerset residents made this year, and the results ... well, they rock.

In front of the home of Eddie and Emma Smith on Ashurst Street in Somerset sits a large rock, painted to depict a beautiful nature scene — blue waters, green grass, a red sky, a mountain, a rock wall. It’s been decorated by Melissa Heseman, a local artist who met Eddie Smith one day when he was driving by her house.

“Some months ago, maybe spring, I was doing some yard work when a man with a zero turn mower behind his truck pulled up and asked if I had someone to mow for me,” said Heseman. “I told him I usually do it myself but the lawnmower was down and I couldn’t afford the repairs at the moment. He offered to mow my lawn and refused any payment.”

Or as Smith put it, “I told her, I’d do it as a compliment. I do that occasionally for people in town (in difficult situations). I like to help.”

A good deed to be certain, and Smith continued to do the job “like clockwork,” said Heseman. Eventually, Smith noticed Heseman’s talents; she would often be painting in her shed/artistic workspace when Smith would come by.

“One day he brought his wife by to see my art,” said Heseman. “She really liked it, so they asked me to paint a rock they had sitting in their yard.”

The sizable limestone rock — about three feet by five feet in size — came from under the new part of the Smiths’ house. They built a new structure there, where they’ve lived for a little over a year.

“They were digging it out to put the foundation down and found (the rock),” said Smith. “I was going to throw it away, but decided I wouldn’t.”

Instead, Smith decided it would make a nice decorative piece outside the new home — but it would look even better painted with something vibrant and beautiful. He knew Heseman was the artist for the job.

“They asked how much I wanted, and I told them how about mowing my yard all season,” said Heseman. “We had a little laugh and it was understood this was a change of services or gift or however you want to call it; it became an act of love.”

Heseman waited until the summer heat was over with, and started putting color on the rock in September, saying that the Smiths were “beyond patient” with her.

“I paced myself and spent two to four hours at a time on it, a few days a week, until it was finished,” said Heseman, who completed her work on September 27.

“This project was challenging and exciting for me,” she added. “I enjoyed working with the texture of the rock, but that texture was what posed the greatest challenge. I used a good primer to prevent the rock from absorbing the color. I used quality exterior paint and finished it with a clear coat to protect it from the elements.”

Smith gave Heseman a lot of free rein in creating the design out of her own imagination but likes the fact that it looks “like a Kentucky rock.”

Heseman said the Smiths asked for a nature scene, but just started “working with the shape of the rock” as far as what the design would look like.

“That’s what flowed from me as I started to paint,” said Heseman. “You won’t see a prior sketch very often. I usually feel it as I go.”

For Heseman, it was a trade well-made and something she’s very proud of having created.

“I took my time and poured all my gratitude for this couple into this beautiful rock,” she said. “It’s a piece I’m honored to have had the opportunity to do and I hope they enjoy it for many years to come!”

No worries there; Smith is very pleased with the result.

“It looks real good,” he said. “I’ve got two trees beside it, peach trees, and flowers, and the flagpole behind it. It just looks nice sitting there. Good conversation piece.”

Richard Hosner, 74, of Science Hill, passed away on Thursday, October 22, 2020 at the Jean Waddle Care Center. Arrangements are pending and will be announced later by Morris & Hislope Funeral Home. Condolences may be expressed to the family at: www.morrisandhislope.com.