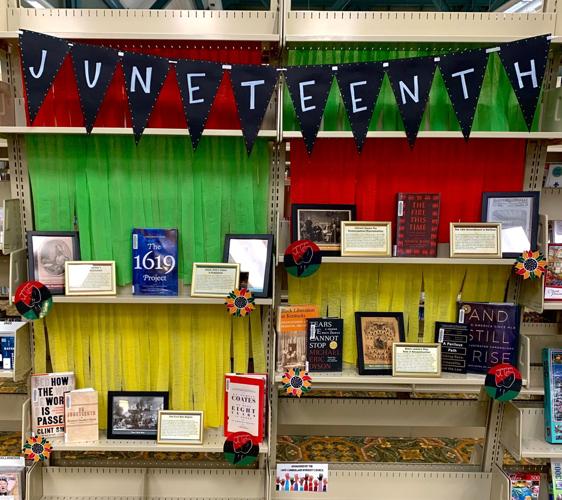 The original Juneteenth display at the Pulaski County Public Library, put up by Delainey Bowers in a collaboration with the Lake Cumberland Diversity Council. 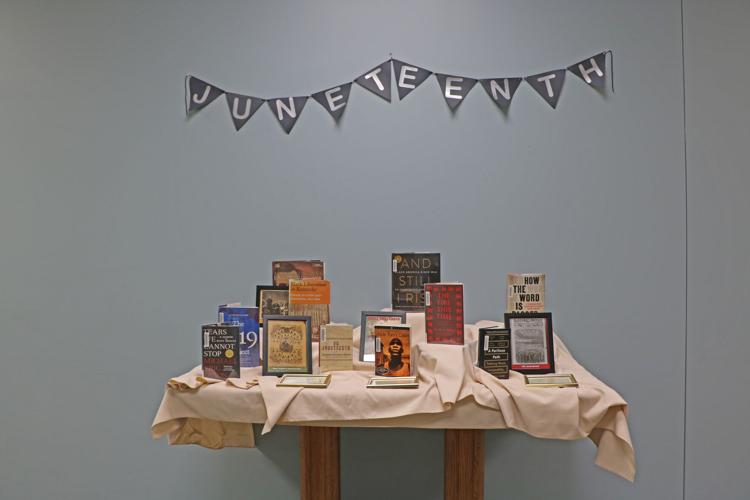 The Pulaski County Public Library has put up a second Juneteenth display in the facility's foyer, as of Wednesday afternoon.

The original Juneteenth display at the Pulaski County Public Library, put up by Delainey Bowers in a collaboration with the Lake Cumberland Diversity Council.

The Pulaski County Public Library has put up a second Juneteenth display in the facility's foyer, as of Wednesday afternoon.

With Juneteenth just around the corner, the Pulaski County Public Library is taking heat for removing a display in honor of the new federal holiday.

Delainey Bowers, who was hired as the library's Adult Programming Librarian at the beginning of May, created the display in a collaboration with the Lake Cumberland Diversity Council, which reached out to her last week and inquired about the possibility of working with the library on such a project.

"Naturally, I said yes," said Bowers. "That person eventually provided a number of materials for the display, including some framed informational print-outs about important Black people and publications during the 19th and 20th centuries as well as a list of books for the display."

Bowers herself bought some decorative items, made a Juneteenth banner, put up the frames, and found some relevant books from the library's collection.

"I took a picture, passed it along to the (Diversity Council), they made a Facebook post, and our original goal was to keep it up through the end of June," said Bowers. "Last Friday, I went into work only to find all the display materials on my desk. Apparently it had been torn down on my day off. I went to speak with HR about what happened, and I was told I hadn't followed 'library policy' that required me to ask for permission to put up any display. I was also told the library doesn't do 'sponsored displays,' so I was also in violation of that rule. I wasn't aware either of those policies existed and was under the impression that I had a certain amount of discretion as a professional librarian to create displays that reflected our community."

According to Charlotte Keeney, Pulaski County Public Library Director, the reason for the display's removal is simply a matter of library protocol.

"All the people in the library that offer programs in the departments, those are always shown to me, even my branches, so I'm aware of what's going on and what they're doing," said Keeney. "We had a new adult programmer and she did not get this display approved through me. I was gone on vacation. She put it up while I was gone on vacation.

"We have a policy that says all displays have to be approved through the director, so when I saw it, I told some of my staff that they needed to take it down, because I had no clue (it had gone up)," she continued. "Not that I was against it. That's not the deal here. The deal here is that she didn't follow policy."

Moreover, exhibits like that never go in the "library proper," she said, but are instead put in the foyer. The Juneteenth display was in the main library, "right as you come through the door, on that first bank of shelves."

The display went up on Monday of last week, recalled Keeney, while she was away. It was taken down on Thursday, and Keeney said the employee left her position with the library on Friday.

Keeney said that she did not consider that there might be a public backlash to removing a Juneteenth display, adding, "I don't know why."

She said she had been fielding "a ton of calls" on Wednesday, explaining the situation to concerned individuals who have mostly been understanding, and has reached out to the local African-American community.

"I have no ill will toward anybody," said Keeney. "... It's not that I disapprove of (the employee's) mission and what they were doing, it's just that it couldn't be put up in the library proper."

Keeney said she's told others that the display could not be put back exactly as it was in the building — partly because of its location, partly because the employee took some of the materials with her — but Keeney is putting another Juneteenth display up in the library's lobby.

Bowers said that she's "pretty disheartened" that the immediate reaction was to tear down the entire display.

"Libraries should serve the needs of their communities, should be willing to welcome folks as they are, and shouldn't shy away from (or attempt to obfuscate) uncomfortable truths," she said. "Black voices and experiences have, historically, been overlooked and underrepresented, and this display was an attempt to highlight an incredibly important turning point."

Nevertheless, Bowers noted "that there are folks within the (Pulaski County Public Library) system that continue to do fantastic work to bring quality programming and services to the people of this county!"

On their Facebook page, the Lake Cumberland Diversity Council made a change to their June 8 post about the library display, saying, "We've recently received notice that this display area has been taken down until further notice. We are in solidarity with our Black community, and hope to learn more about the reparations that will be taken going forward."

Juneteenth commemorates the occasion when the last enslaved African-Americans learned they were free. Confederate soldiers surrendered in April 1865, but word didn’t reach the last enslaved Black people until June 19, when Union soldiers brought the news of freedom to Galveston, Texas. That was also about two-and-a-half years after the Emancipation Proclamation freed slaves in the Southern states.