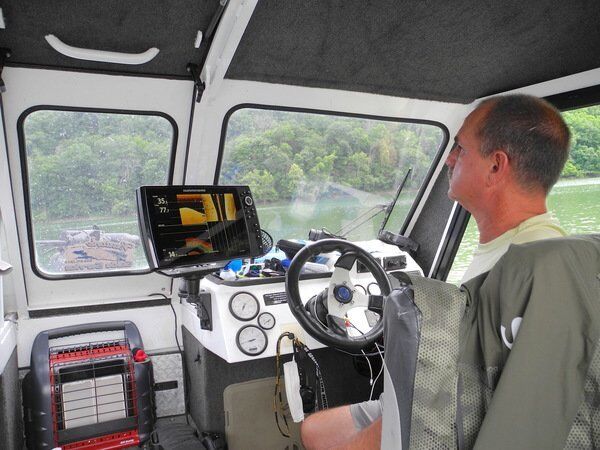 Jeff Burton operates a Custom Weld boat, which he says offers greater stability out on the water. 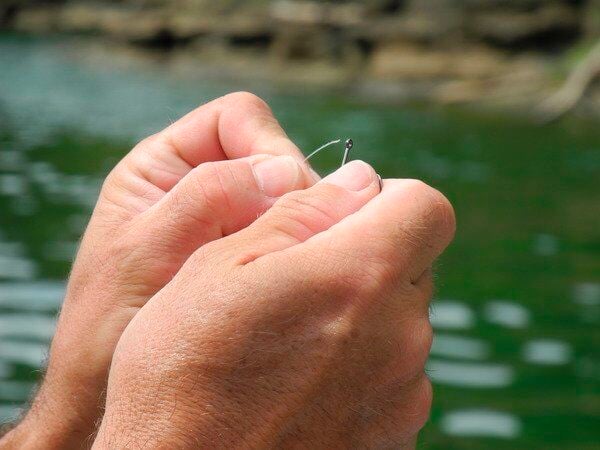 Tying a hook to fishing line can be as intricate as threading a needle. 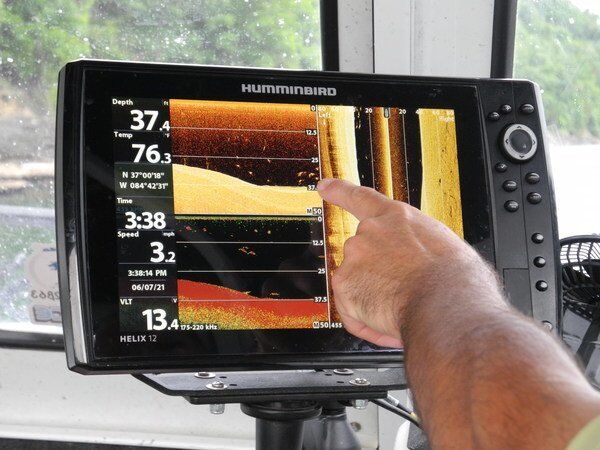 Burton indicates a number of stripers appearing on sonar. 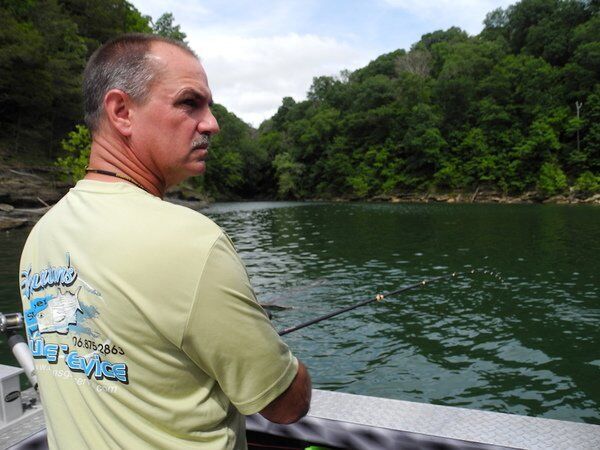 Jeff Burton of Nancy has been fishing the waters of Lake Cumberland all his life. He began working as a guide part time in 1988. 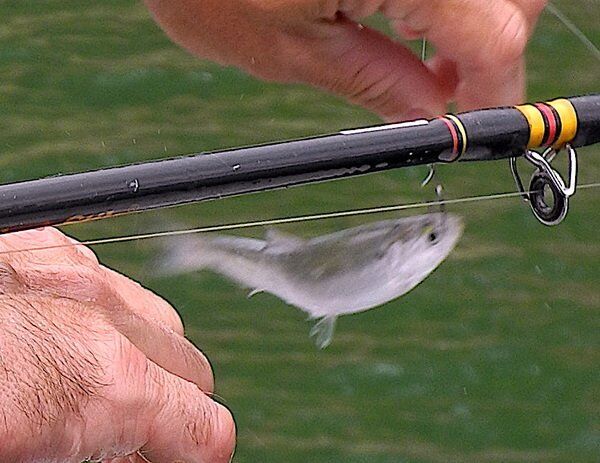 Jeff Burton operates a Custom Weld boat, which he says offers greater stability out on the water.

Tying a hook to fishing line can be as intricate as threading a needle.

Burton indicates a number of stripers appearing on sonar.

Jeff Burton of Nancy has been fishing the waters of Lake Cumberland all his life. He began working as a guide part time in 1988.

Fishing is perhaps the most popular sport on Lake Cumberland, which attracts a number of tournaments as well as up to four million visitors each year.

The 50,250 acres of water is full of varieties like crappie, rainbow trout, sauger, striped bass, walleye and more. And a guide will work his tail off to find where the largest schools are for his clients. Catch or not, fishing guides can show you the best places to fish locally, what kind of tackle to use and how to use it.

At times, weather is a factor. A cold front could shut fish down or a windy day may keep the boat from holding a particular spot. The seasons matter too. Fish go through cycles of activity that include spawning, moving from one area of the lake to another and seasonal water turnover.

While he's been booking charters since 1988, Burton grew up fishing "like most people in this business," he laughed. "I started bass fishing and whatever we could catch."

The Somerset native has been living in Nancy for the past 30 years, and launches his charters from Lee's Ford Marina. What began as a second job became Burton's primary business after he retired from the Kentucky Department of Corrections in 2013.

"Just being on the lake," Burton responds about his inspiration to guide. "That's what brought me back home and kept me here."

Though open year round, Burton's prime catching season is from March through September. It's not a weekend gig; Burton can book charters every day.

"There's not much down time during the season," he said. "We book about six weeks out ahead of time."

While one might expect clients to be novices, Burton said he books as many charters for other guides and even professionals. The typical trip, he added, is as much about the experience and making memories as it is about catching fish.

"You get a lot of families and retired folk," Burton said. "You also get a lot of guys getting together. If they went to college or work together, it's kind of like a golf outing after a business meeting."

But for those who haven't fished before, Burton is sure to go over the basics. One thing you might want to prepare for is the timing. Burton is usually out catching shad for live bait around 1 a.m. Typical charters start at 5 a.m.

Charters are booked for six hours, unless the client(s) catch their limit and have to come back. The service provides all equipment needed -- preferably Shimano reels and live bait rods. The Custom Weld boat is equipped with first aid kits, GPS and fish locators as well as being heated and enclosed in case of inclement weather.

"There are only about 10 of these boats like this out on the lake," Burton said. "It's safe, built extra heavy. We have a lot of logs in Lake Cumberland and they do nothing but put a little ding in this boat. It also has high sides and is a stable boat."