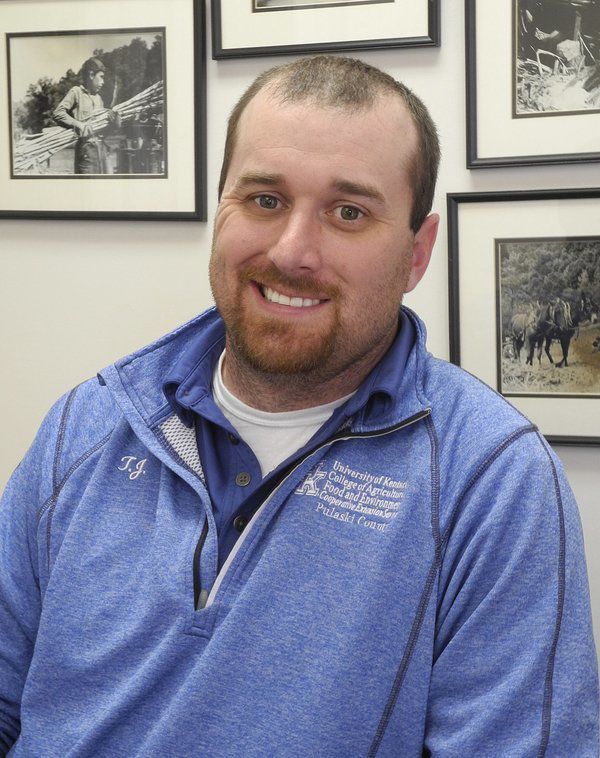 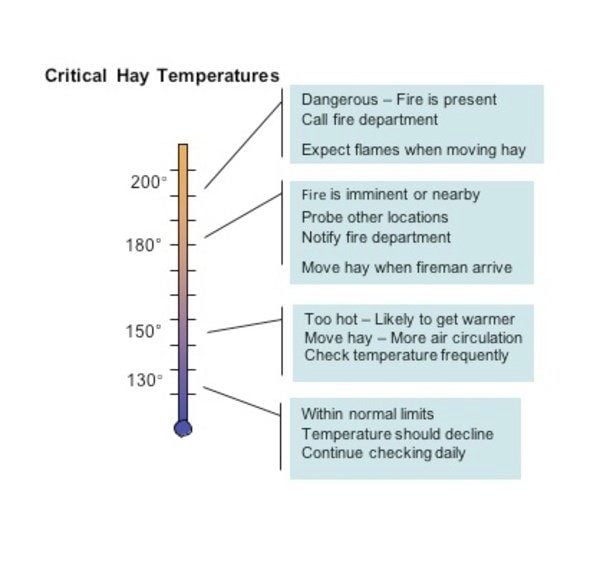 It is well known that baling hay at the right moisture content is the key to preventing excessive heating in the bale. It can be quite a challenge, though, to get all of the hay baled without some of it being a bit wetter than is desirable. That's when trouble can begin, and we have to be concerned about heating that could damage the hay or even lead to spontaneous combustion. Fortunately, the heating process does take some time to develop and we do know what temperatures signal that a critical situation may be developing. So, monitoring bale or stack temperatures is one good way to find out what is happening inside the bale and to help avoid that nasty surprise that no one wants to see - a hay fire.

What are we looking for? Most hay goes through one or more heating cycles (a "sweat") immediately after baling. It is not unusual for internal bale temperature to exceed 100° F, and it may go as high as 130° F if enough moisture and oxygen is present. Under normal conditions, the moist bale temperature peaks slightly below 130° F and then begins to decline. If the hay was wetter, we might see the peak temperature exceed 130° F. Dry hay heats very little at all, and if the bale moisture was somewhere between 15 and 20% we would expect the peak temperature would also be below 130° F.

If the temperature peaks at less than 130° F, there may be some loss of hay quality but the heating does not create a fire danger. With free air circulation all around the bale, both heat and moisture are lost out the sides and ends of the bale. A single bale rarely heats enough to catch on fire. However, when we place the bale in a stack with other bales that are also heating, we create a situation where heat cannot be transferred to the edges of the stack as rapidly as it is produced. If the bales we stacked are a bit wetter than they should be, temperatures can easily go above 130° F. Once the temperature reaches 140 to 150° F, some other microbial growth and chemical reactions start to generate heat at a faster rate. Then there is a real risk that the temperature may very rapidly rise above 200° F where spontaneous combustion can occur.

What we are really trying to do in measuring hay temperatures is to avoid a potential catastrophe by making sure that we know ahead of time if a critical situation might be developing. From a quality perspective, it is best if hay temperatures stay well below 130° F, but there is little risk of fire up to that point. It is a continued temperature rise above 130° F that signals potential danger, and detecting those conditions is the purpose of monitoring bale or stack temperatures. Some critical points on the temperature scale are shown in the graphic above, and some suggested actions for those designated conditions are also given. Remember, too, that temperatures can rise significantly in a matter of hours when a critical situation is developing.

Where do we need to measure temperatures? We know that the heating process is related to moisture, so it makes sense to monitor the hay that we think might have been too damp when baled or may have gotten wet after it was baled. With reasonably uniform moisture in the bale, the highest temperature is likely to be near the middle where heat is retained for the longest time. That implies that we should be looking near the center of a bale or deep into a stack. If the core is loosely formed in a large round bale, the highest temperature may be found in the more tightly packed hay 6 to 12 inches away from the center. Probe square bales from the side and round bales from the end. A temperature probe should be long enough to reach the middle part of the bale. Probes for large packages will need to be at least 18 to 36 inches in length, depending on the size and type of bale that you have. It's probably not feasible to measure every bale, so concentrate on bales that seem most likely to have a problem. Generally, those are the ones with the wettest hay. It's a good idea to probe a bale in 3 or 4 different places, perhaps from each end or side, to see if temperatures are warmer in some areas than in others. If you find a warm spot, then continue your daily monitoring in that same general area of the bale. It may be more difficult to reach the center of a stack, but it's important to get at least 5 to 10 feet down from the top or in from the side. The most critical factor is to be able to reach an area where the wettest hay is stored. It is best to probe in several locations and at different depths to locate the warmest area.

Several different types of thermometers can be used and no great precision is required. Accuracy within 5 ° F is sufficient. Durability, temperature range, ease of use, and cost are probably the more important factors to consider. Any hay thermometer should be capable of reading temperatures up to at least 200° F.

A simple glass thermometer can be used by attaching a string or thin wire and lowering or pushing it into a probe that has been inserted into the hay. These can be pocket models with a case, longer laboratory type thermometers, or candy thermometers. Some are made with metal armor that partially surrounds the glass tube for added protection. However, no glass thermometer, with or without armor, should be inserted directly into a bale because they break very easily. Also because they are easily broken, do not use mercury thermometers. Only spirit filled thermometers should be used. This avoids any risk of contaminating hay with mercury in the event of a broken thermometer.

Electronic thermometers with remote sensors and a digital readout can be used for this application. Common indoor/outdoor thermometers of this type could be used for some measurements, but most of them have a maximum upper temperature reading of about 160° F. A better choice is to look for instruments used in the heating and air conditioning industry. They are likely to be available with a higher temperature range. Most electronic thermometers require batteries although some are solar powered with or without a battery backup. Avoid LED displays as they are often hard to read in bright light. An LCD (liquid crystal display) is a better choice. Long stem dial thermometers, also sold as "compost thermometers," are probably the most rugged and reliable. Unfortunately, the price increases considerably as the dial size and stem length increases. It is tempting to insert these thermometers directly into a bale without using a probe but that is not a good idea. Inside the thermometer stem, the sensing element is near the tip and there is a long helical connection through the stem to the dial. Bending or 15 crimping the stem can severely affect the thermometer's accuracy or even render it inoperable. A multitude of low cost dial or digital thermometers with an attached stem are available. They may be usable for a few applications, but are not always well suited to measuring hay temperatures. The stems are often too short and/or too thin, to be practical for inserting deep into a hay bale, and the attached dials or digital readouts are usually too large to be inserted into a reasonable size pipe probe.