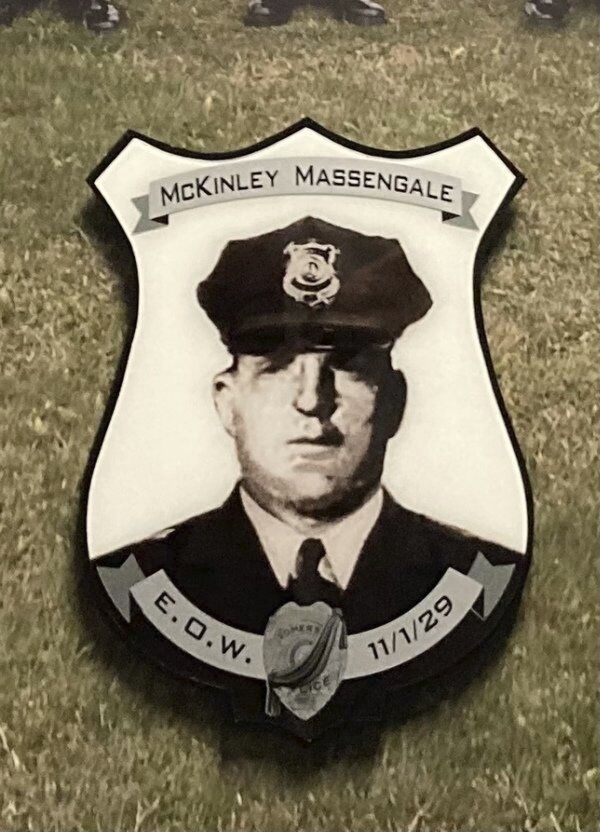 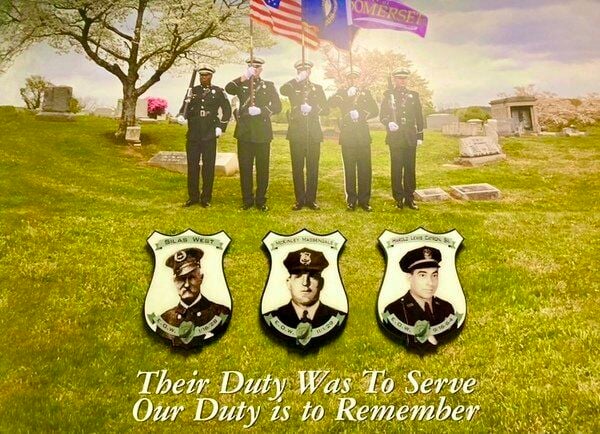 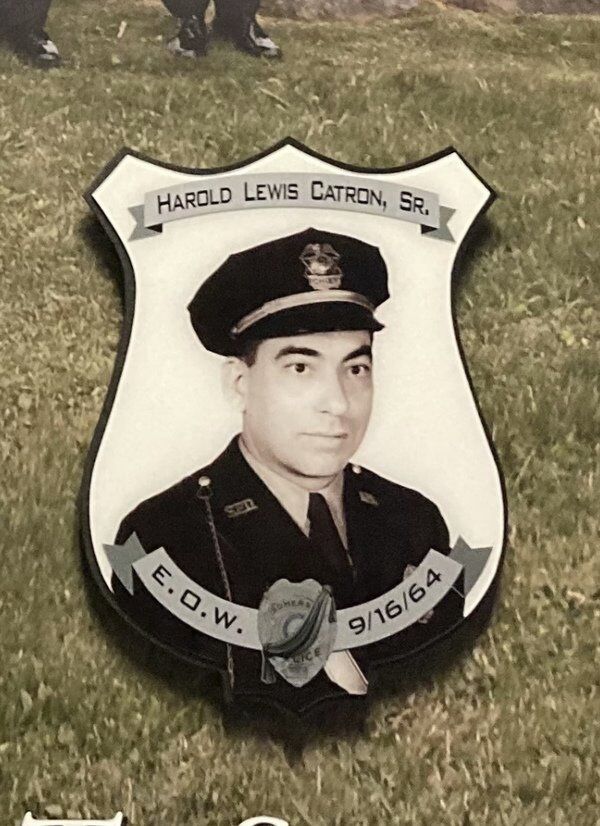 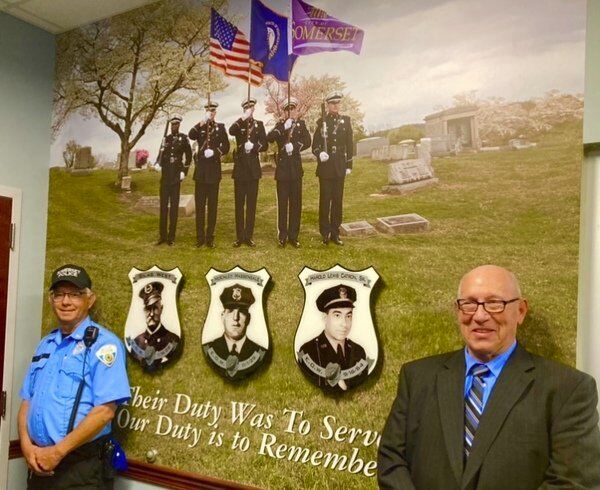 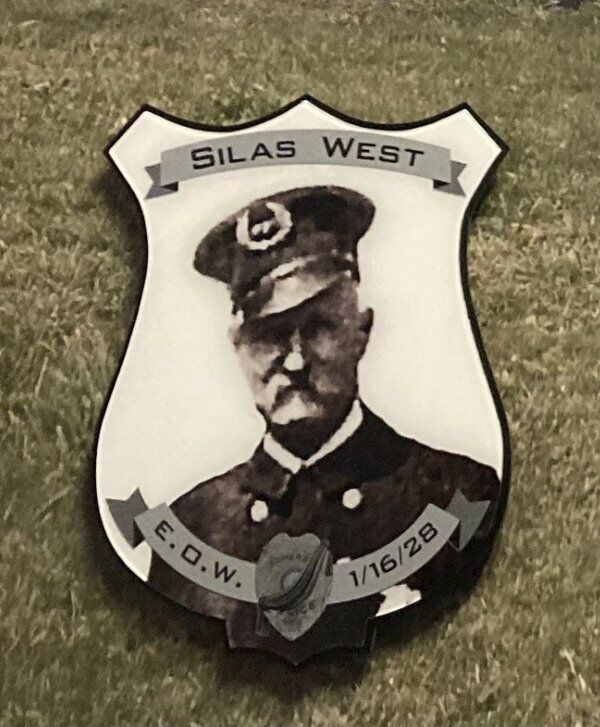 Somerset Police Department unveiled a memorial wall this week dedicated to their officers who were killed while serving the citizens of Somerset. The display located inside the lobby of the police department highlights Chief Silas West, Patrolman Walter McKinley Massengale and Chief Harold L. Catron.

The events surrounding the deaths of our Somerset Police Officers are explained below.

Chief of Police Silas West was shot by Perry Chumbley near the fountain square area of downtown Somerset on January 15, 1928.

Chief West had given Chumbley a summons for being drunk in public allowing him to go home with a friend, V.O. Burton in lieu of jail time. Later the same day, Chumbley became more intoxicated and enraged about being charged by West. Chief West was notified by Burton that Chumbley was looking for him and was making threats directed toward the Chief.

West and Patrolman McKinley Massengale were in the city's only police cruiser when they spotted Chumbley on the south side of the square. As West got out of the cruiser to speak with Chumbley he had almost made it to the man when Chumbley drew a revolver from his pocket and began firing at Chief West striking him twice, once in the chest and once in the right hand. Chief West was able to draw his own revolver with his left hand and returned fire, fatally wounding Chumbley. Chief West proceeded to walk himself to the hospital which was then located on North Main Street. Chief Silas West died of his injuries the next day, January 16, 1928.

A year and 9 months later on Halloween night in 1929, McKinley Massengale would find himself in another gun battle less than 100 yards from the location where Chief West was shot.

Hill was arrested after the officers found illegal whiskey inside the establishment. Later that evening Massengale received information from Alfred Thurman of hidden areas at the café the previous search had not uncovered. With this information, Massengale along Patrolman Jasper, Pulaski County Sheriff Jim Edwards, and a night watchman who had been keeping an eye on Somerset High School that evening returned to the café to investigate further. As Massengale approached the front door of the café, gun shots rang out from inside the building where one round went through the front door and another through the front window. The round through the door had struck and killed Massengale. Jim Jasper returned fire toward a silhouette inside the café, then moved to the back of the restaurant where an open door was found, and Jasper saw someone running away through a patch of nearby woods. After bringing in bloodhounds the officers were able to track the route in which the man who ran through the woods had taken to Vine St. at the home of Alfred Thurman who was located inside. Thurman was arrested and confessed he had been inside the café and was in fact the silhouette Jasper saw inside. Eventually Thurman identified Ivan Hunter as the person responsible for shooting Massengale. 2 days later, Hunter was found and arrested at a home in Wayne County. Hunter would later confess to the murder and provided officers with the location of a .38 revolver used in the murder. Hunter told officers he would have shot anyone coming in the café that night after receiving orders to do so by Alfred Thurman. Hunter told the officers after he had fired the 2 shots from the .38, he then went through a hidden trap door leading to the adjacent building. Hunter remained inside the adjacent building which was an undertaking business hiding within a casket until the next day.

On September 16, 1964, Somerset Police Chief Harold Lewis Catron died from injuries sustained during an attack where Chief Catron was shot by Robert Stevens with a blast from a 16-gauge shotgun.

Years earlier, Chief Catron was on the front porch of his Jasper Street home along with his son, Lewis Catron, when a black Buick traveling south on Jasper turned right onto Hawkins Avenue, at this time the driver of the Buick lifted a shotgun then shot toward the porch striking Chief Catron and his son Lewis. The chief was struck by 89 of the pellets from the blast and his son Lewis was struck in the arm by four pellets. Forty-five minutes after the attack the Buick was located in front of Hughes Department Store on S. Maple St. James Farley and James Mounce were found with the vehicle. Farley was shot and killed by the officers after Farley angrily advanced toward them. The owner of the Buick, Robert Stevens, along with James Mounce and Lawrence "Fats" Spears were eventually charged for conspiring in the attack on Catron. Stevens who had previously threatened to shoot the Chief was eventually indicted for being the person responsible for pulling the trigger that day as he drove by the Catron residence admitting to authorities he intentionally targeted the Chief due to his position as Chief. Prior to being taken into custody for the indictment, Stevens took his own life. Chief Catron continued to serve the City of Somerset after the events that day until a remaining pellet having never been removed from Catron due to its location near the spine became dislodged causing a heart attack resulting in Catron's death.