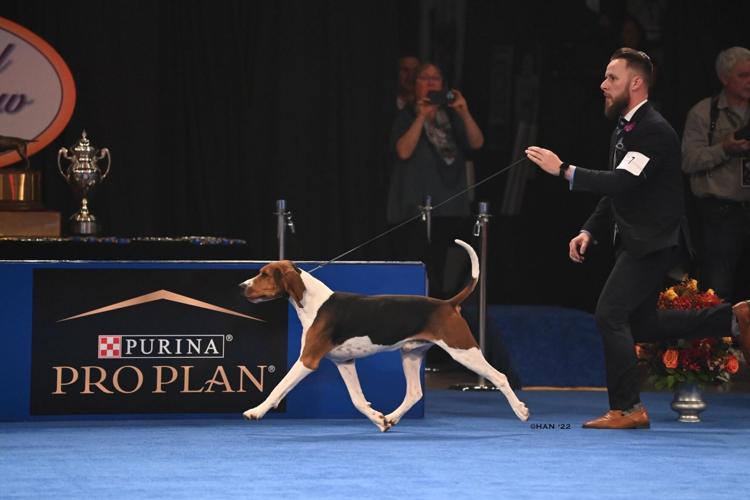 Nate and his handler Cole Vanover trot across the floor 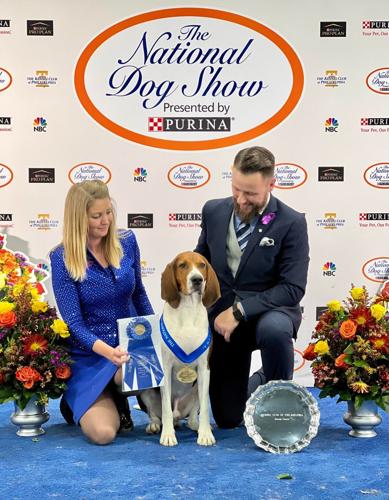 Nate the dog is presented with his medal.

Nate and his handler Cole Vanover trot across the floor

Nate the dog is presented with his medal.

While most Somerset dogs are currently spending their time curled up on the sofa, Nate is winning shows across the United States.

Nate is a Treeing Walker Coonhound from right here in Somerset, KY who competes in American Kennel Club competitions across the nation, and recently placed first in the hound category in the National Dog Show in Philadelphia, Pennsylvania’s Greater Philadelphia Expo Center.

Nate is almost three now and is already ranked in the top 10 hounds and in the top 50 among all breeds in the American Kennel Club.

A Kentucky breed, the Treeing Walker Coonhound is a popular dog used for raccoon hunting and is known for the impression it gives as a “working dog.”

The American Kennel Club (AKC) is a national registry which catalogs all purebred dog breeds in the U.S. and holds sanctioned competitions, including the Westminster Dog Show in New York.

The National Dog Show in Philadelphia is different than Westminster in that, rather than being invitation-only, allows anybody to put their pooch up to compete. 1,734 dogs were entered into the competition. Of that number, 247 were hounds. Of those 247 hounds, Nate fetched victory and was able to go on to compete in Best of Show. He’s one six best in shows this year and close to fifty hound shows.

In these competitions, the dogs are judged on their “conformation.” A dogs conformation rests on many categories including its temperament, expression, movement, body structure, head shape, etc. etc.

A common rule in the AKC is that dogs must have names that show their heritage and also invoke prestige. Despite being called Nate, the dog competes under his long and complicated name GCHS Lost Heritage Knight of Eldorado.

Professional dog handler Cole Vanover has been breeding dogs for more than 25 years and is who brought Nate to the competition. Vanover is on the road every weekend with his kennel Lost Heritage to have their pups go head-to-head against other specially bred dogs.

As a professional dog handler, Vanover has to have a keen eye for a dog’s conformation. As he breeds dogs, he wants to make sure that the right hounds meet each other so that their structures and temperaments line up perfectly.

“Just making sure their bloodlines mix well together,” said Vanover.

As for the Knight of Eldorado himself, Nate knows nothing about dog breeding or conformation. He simply loves the attention he gets by participating in the shows.

“He’s a little wild, but he enjoys it. The audience and the applause really gets him going,” said Vanover.

Following the competition, Nate celebrated by playing with his favorite black rubber ball and then promptly got it stuck under the couch.

“I think he does it on purpose,” laughed Vanover.