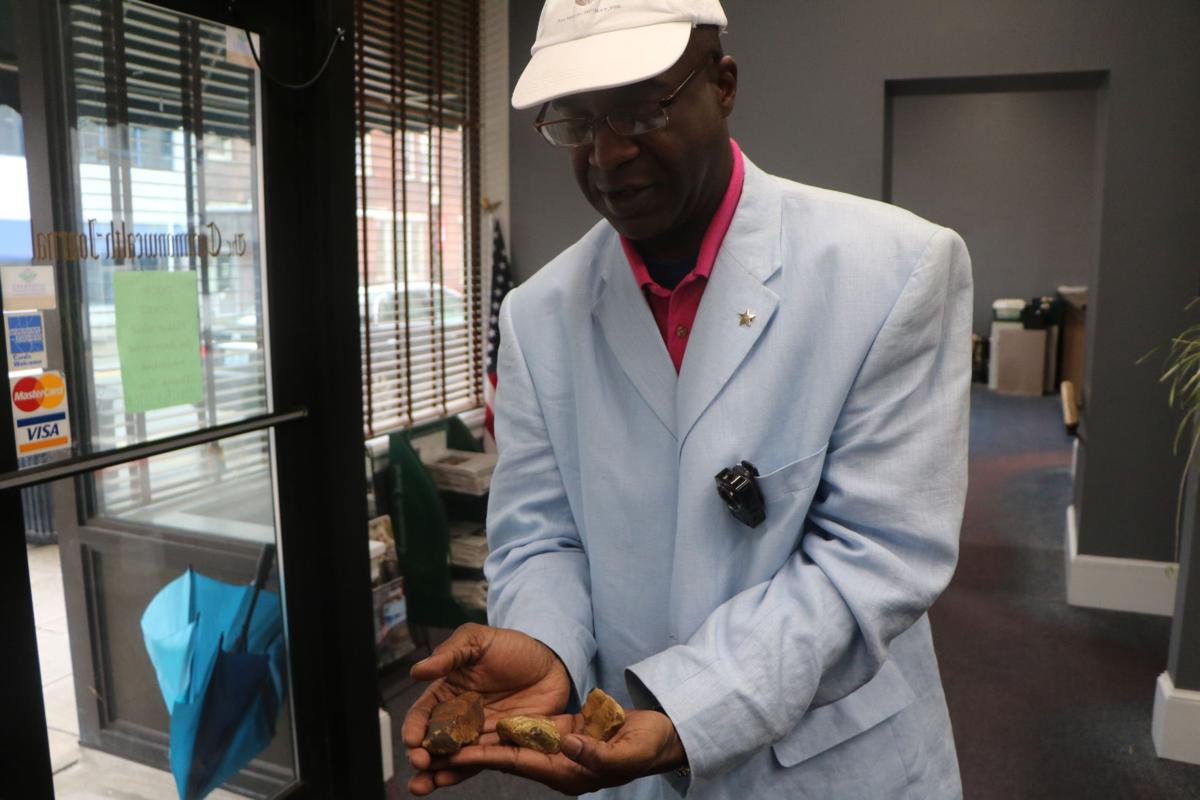 Brian Simmons displays some of the 39 rocks he's identified as possible meteorites that appeared in his yard in the days leading up to Christmas. 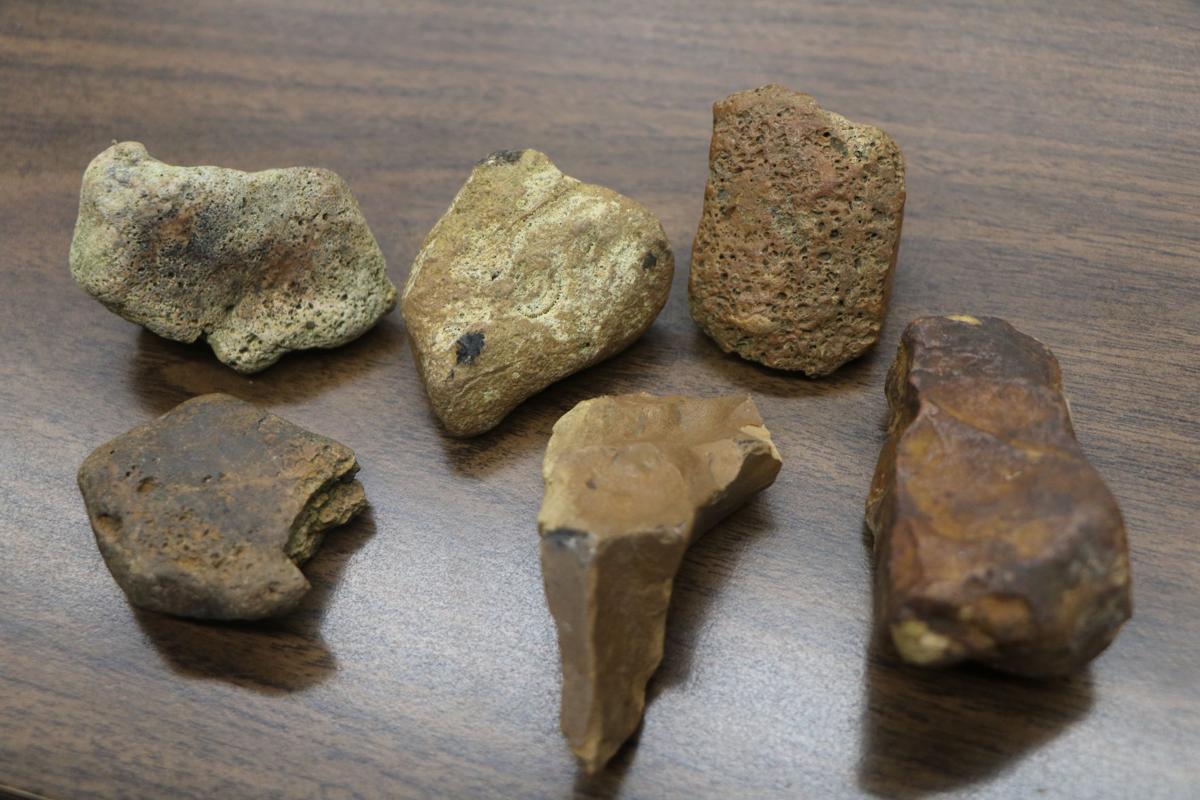 The rocks appear different from what you'd normally find after examined under a digital microscope, and have magnetic properties.

Brian Simmons displays some of the 39 rocks he's identified as possible meteorites that appeared in his yard in the days leading up to Christmas.

The rocks appear different from what you'd normally find after examined under a digital microscope, and have magnetic properties.

Brian Simmons knows that sometimes, the good things in life can just fall out of the sky.

Sometimes that's merely a figure of speech. But not always.

Simmons, an actor, motivational speaker, and retiring human resources specialist, spent his holiday season searching out not presents from Santa around his house, but apparent broken-up bits of a meteor that began appearing all around his property the week before Christmas.

Some people merely provide information when asked questions; Simmons is a gregarious personality with a deep, resonant voice that cannot help but tell a story with each response. A native of Hopkinsville who has lived a number of different places, Simmons moved to Somerset this year after visiting a colleague and attended a Somerset-Pulaski County Chamber of Commerce event showcasing Watershed Arts Alliance at Jarfly Brewing Co. Simmons was impressed enough that he decided to spend the next chapter of his life and career in Pulaski County.

"It was just the people that I met, serendipitous events took over," he said. "So many people really had a passion for Somerset."

Simmons spent his December acting in Flashback Theater Co.'s "Miss Bennet: Christmas at Pemberly." But a funny thing happened on December 18, just as he was getting into the thick of performance week.

"When I walked out to the car, I noticed two rocks on my driveway," he said of his home in the Green Meadows subdivision, in the southern part of Somerset. "It was probably 11:30 a.m. or so, I was getting my day going, and I saw the two rocks sort of close to the landing area of the front door. I picked up the rocks, and there was something about them. They were a little heavier than what their size would indicate. Sort of unique-looking."

He put them on a table by the front door, and went about his business as rain fell from the sky. On Thursday, Simmons found himself on the phone with an out-of-town theater director, walking outside and talking, when he looked up at his gutter and saw sitting there another curious rock.

"She could tell I was distracted," said Simmons of his friend on the phone. "I said I was looking at a rock on my gutter screen; how did a rock get up on my gutter screen? Surely no bird was able to pick this up, unless it was an owl or a hawk or something.

Most of the stones are about the size of a golf ball, though some are a little larger. But it was their other physical characteristics that most interested Simmons, who put them under a digital microscope to take a closer look.

"My mind was totally blown away by the structure of it all," he said. "The color and the texture of them wasn't like a normal rock. ... You could tell these are not sandstones or anything like that."

Simmons' mind went to an out-of-this-world possibility: meteorites. He started looking up information and "doing due diligence" about this phenomenon -- broken-off pieces of heavenly bodies like asteroids -- and wondered if that's what he had.

"Looking up the information, one of the characteristics is that it would be magnetic," said Simmons. "Sure enough, these are magnetic. I got a magnet out and it repels it. You could feel the force on it."

The next step was to see what it might have come off of, if it was in fact a meteorite. Simmons went onto the American Meteor Society's website. Turns out, there were 11 reports about a fireball seen in the sky over several states in the south and midwest close to Kentucky — and yes, there was a report from Kentucky as well. This was confirmed by NASA video images.

Such a fireball would occur if a piece of space debris off of something like a comet or asteroid entered the atmosphere and burn up. It's possible for pieces of the object to land in various places during its journey, and are known as meteorites.

"I went to NASA's website; they have video of the fireball itself," said Simmons. "There are 16 different cameras set up that record different sightings. This particular fireball was captured, so it was verified through NASA and the American Meteor Society."

Meanwhile, Simmons continued to find more rocks in the next few days — one in his driveway that he backed over, one in his mulch bed. A former member of the U.S. Air Force, part of a unit that did search and recovery, such as looking for objects in an area after a crash, Simmons utilized his training to search his yard for more such rocks.

"As I started going through the yard, I started finding more," he said.

Simmons checked the fireball reports again; there was one reported on December 20 that could have accounted for the new rock sightings that weren't there a couple of days earlier. That would mean, however, that pieces of two different astronomical events happened to land right in Simmons' yard — something that he finds extremely "serendipitous."

However, "over the centuries, there has been quite a bit of meteor activity over that part of southeastern Kentucky," said Simmons.

In total, Simmons now has 39 of these rocks that he's found in his yard, and has sealed them in airtight plastic to preserve them. He knows that if they are true meteorites, they can be worth a "grand range" — more valuable than many of earth's own precious stones because they're not from this planet — but is still planning on having them analyzed by the Kentucky Geological Survey at the University of Kentucky to determine exactly what Simmons is working with.

Simmons said he's done enough research now to have looked at maps and tracked the trajectory of the fireball such that he feels like he might even know where it landed, but "that's down the line."

The most exciting thing about the discovery might not be just for himself, but for the whole area. Simmons has long had a strong interest in community promotion; he hosted the KET program "kNOwMORE Nonprofits," focusing on the impact of area non-profit organizations, has appeared on "Kentucky Newsmaker" with Bill Bryant, and has worked with outfits like Southeast Kentucky Economic Development (SKED) and the Kentucky Travel Industry Association. He told the Commonwealth Journal he's been interested in leading tours of this area, with a specific interest in Kentucky geology — and so to have unique rocks like these literally fall out of the sky is something he takes as a bit of a sign.

"I tend to be in places when they're on the rise," he said, mentioning communities like Lexington, Ky., and Charlotte, NC, as homes of his that saw substantial economic progress in recent years. "I was in Lexington in 2005 when it really developed, and I see the same thing happening in Somerset. It's primed and ready to be a major tourist destination."