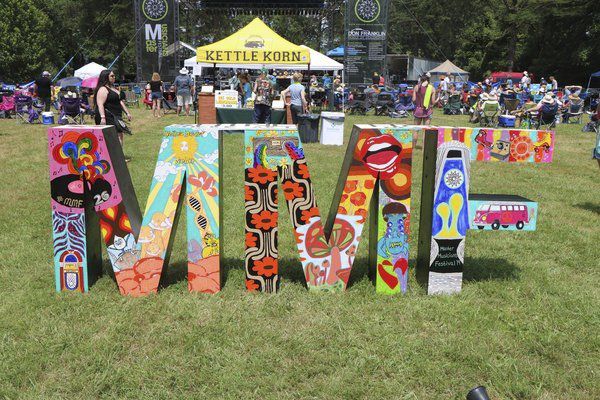 The piece of welcoming art work courtesy of the Shine House that greeted visitors in the middle of the Master Musicians Festival Field this weekend. 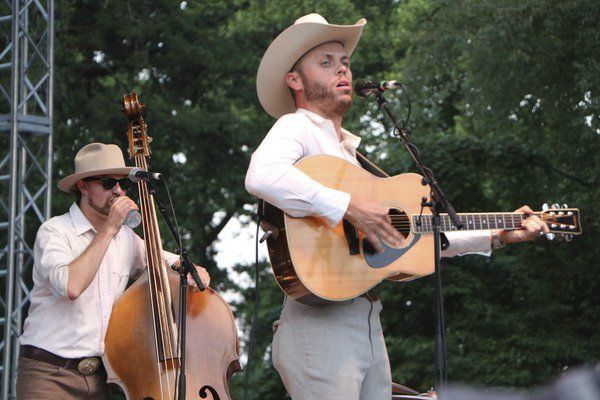 With temperatures around 90, it was hot on stage at this year's MMF -- Charley Crockett performed Friday, while his bass player grabbed a quick drink of water in the oppressive heat. 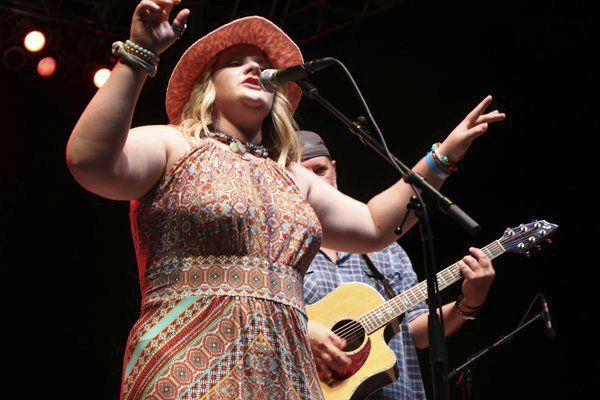 Teenager Abbey Nicole (performing with Kevin Dalton) won the opportunity to perform on the MMF stage via McNeil Music Center. She performed Friday night before the headlining act. 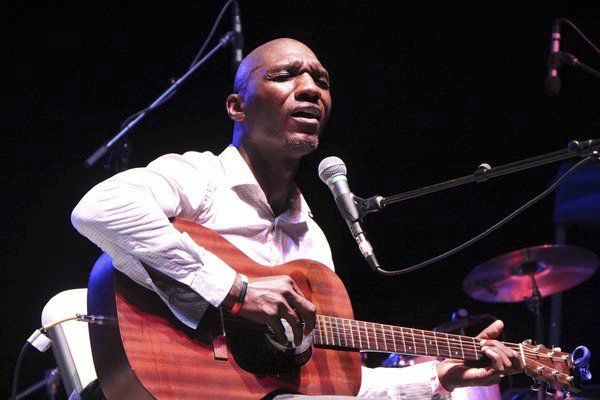 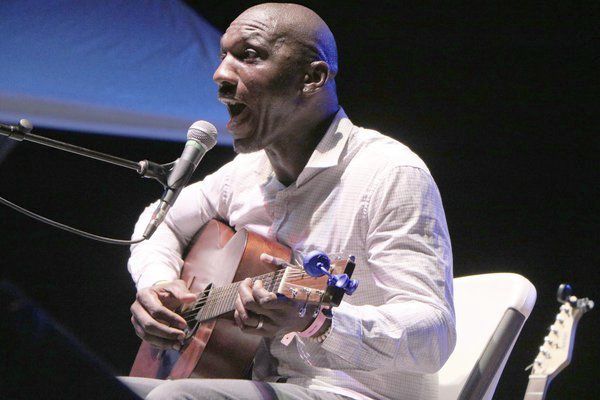 The piece of welcoming art work courtesy of the Shine House that greeted visitors in the middle of the Master Musicians Festival Field this weekend.

With temperatures around 90, it was hot on stage at this year's MMF -- Charley Crockett performed Friday, while his bass player grabbed a quick drink of water in the oppressive heat.

Teenager Abbey Nicole (performing with Kevin Dalton) won the opportunity to perform on the MMF stage via McNeil Music Center. She performed Friday night before the headlining act.

For the first time in the 26-year history of the Master Musicians Festival, stormy weather caused a premature end to the event.

With the crowd anticipating the Jason Isbell finale, storms with heavy lightning moved through the area, forcing the event to shut down before 8 p.m.

A MMF spokesperson told the Commonwealth Journal that it appeared the lightning would not subside the remainder of the evening.

Prior to the disappointing end to the 2019 event, the first night had gotten things off to a rousing start.

Every year, Somerset's two-day outdoor music festival at Somerset Community College's Festival Field is a mixture of those two types of performers -- those who have made it big, and those with aspirations of doing the same. The former tend to be glad to have played MMF, an event that often makes an impression on them that makes them want to come back in the future. The latter have made a memory that will last a lifetime.

That was the case with youthful performer Abby Nicole. Only 16 years old, the local singer and songwriter won the opportunity to perform on the MMF stage Friday right before that night's headlining act, bluesman Cedric Burnside, via McNeil Music Center. After coming off the stage, Abbey was giddy; though it was dark outside, her joy was bright enough to light up the backstage area.

"It was crazy," she said of the experience. "Before, it was a whirlwind of emotions. 'Oh my goodness. Can I do this?' And then I got up on stage, my adrenaline took over, and I don't know. I was singing for an audience of one."

In reality, there were quite a few more people than that around to hear Abbey Nicole perform. MMF Board president Tiffany Finley, said that Friday night's turnout was probably a bit down from last year, but Festival Field was still plenty full of people on the first night, and as always, the crowd grew throughout the day Saturday.

"The heat probably kept a little bit of people away, but it was still a beautiful night," said Finley. "Everybody was very complimentary about the overall atmosphere and the acts. Everything ran very smoothly, so we're pleased."

Indeed, the Heat Miser was one of the attendees at MMF this year, with temperatures up around 90, and as much sweat on bodies as music in the air. For Burnside, grandson of Mississippi blues legend R.L. Burnside, it felt like perfect weather for his kind of music; he even joked with the crowd about bringing that "Mississippi heat" up to Kentucky.

But again, part of the magic of MMF, while young local talents got to go on stage, Burnside spent time before his close-out set down among the people in front of the stage, enjoying the music like every other festivalgoer (specifically, while Americana artist Charley Crockett was playing.)

"I love this festival, and I love Charley Crockett," said Burnside. "The audience is beautiful ... I want to think everybody for having me."

Would he come back to play MMF again? "Without a doubt," he said. "Definitely."

Friday started off with Spooky Fox, featuring Monticello's Yovany Pino. Even though the heat was "killer," he was glad to have the privilege of opening the 2019 festival.

"It was great. I couldn't ask for better guys to play music with," he said, noting fellow band members John Neikirk Jamie Robinson, Ben Zimmerman, and Owen Reynolds. "We wanted to kind of kick things off with a bang and kind of burn it all down, and I think we burnt ourselves down. We got part of that right. It was really awesome and it's definitely good to represent local music in that way."

Spooky Fox also performed in 2014, but even being experienced performers, Pino could find himself as starstruck as anyone else.

"I got a chance to meet Charley Crockett. He's a really cool guy," he said. "I was about blacked out so I don't remember half of it, but I know it's on my phone -- I've got a picture with him."

Perhaps one of the stars performers will be eager to take selfies with in the future will be Abbey Nicole. Even at her young age, she just released an EP called "Blame" -- the same name of the song she performed on stage Friday night, dancing with infectious enthusiasm and accompanied by local guitarist Kevin Dalton of one of this years' Eastwood Records Stage acts Kevin Dalton and the Tuesday Blooms. (Find the EP on iTunes, Spotify, Google Play, and Amazon Music.)

Abbey said she's inspired by numerous things -- "I'm a teenage girl, so a lot of boys, a lot of heartbreak," she said (and the lyrics of "Blame" told a story along those lines) -- and is becoming a prolific songwriter for her age.

What won't last just an hour is the memory of her big chance on the MMF stage.

"Oh sure," she said when asked if she'll remember this for a while. "For the rest of my life."