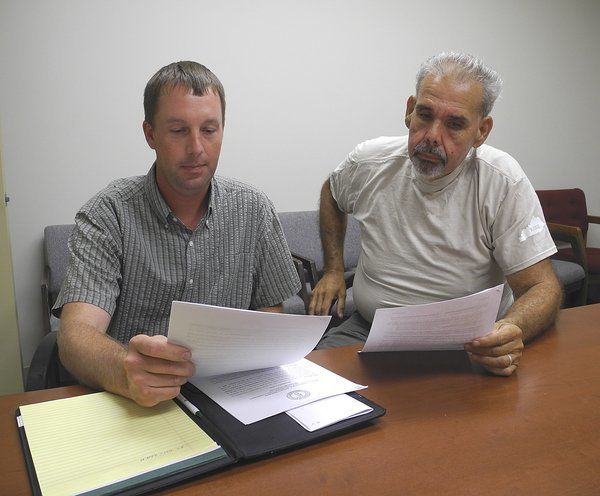 Program Coordinator John Burnett and Rodney Dick, who chairs the Pulaski County Conservation District board, look over the guidelines for the state Agricultural District Program.

Certified agricultural districts statewide are shown in green in the map above. Pulaski County has three such districts, which are comprised of more than 3,000 acres.

Program Coordinator John Burnett and Rodney Dick, who chairs the Pulaski County Conservation District board, look over the guidelines for the state Agricultural District Program.

Certified agricultural districts statewide are shown in green in the map above. Pulaski County has three such districts, which are comprised of more than 3,000 acres.

Annexation may be dead issue but landowners may be interested in a program administered by the Kentucky Division of Conservation aimed at protecting the commonwealth's best farmland.

The Agricultural District Program in by no means new -- having been created by the Agricultural District and Conservation Act (KRS 262.850) that was passed by the Kentucky General Assembly back in 1982. But before the recent discussion about growing the City of Somerset's population through annexing unincorporated areas was halted by Mayor Alan Keck on July 16, the prospect may have sparked new questions about how to form an agricultural district according to local officials with the Pulaski County Conservation District.

"I think it would be fair to say we've not had any more interest in the area that was looking to be annexed…than there has anywhere else in Pulaski County," local conservation board chairman Rodney Dick noted. "I think that definitely there is renewed interest all over the county."

"The [state] always wants us to making people aware of all the programs they've got to offer," Program Coordinator John Burnett said, "but we've been getting a few people call in with questions about it. We thought it'd be good to put something out there and just inform everybody that it is available and how it works."

According to the state website explaining the program (https://eec.ky.gov/Natural-Resources/Conservation/Pages/Agricultural-Districts.aspx), its goals "are to protect our best agricultural land for food and fiber production and to prevent its conversion to nonagricultural usage."

Landowners (whether individually or as a group) with at least 250 contiguous acres can obtain paperwork to petition for an agricultural district from their local conservation district office. If there are multiple properties involved, each individual parcel must contain at least 10 acres -- or 11 with a homestead.

Burnett explained that his office works with the petitioners and the Pulaski County PVA Office to put maps together, which are then submitted to Pulaski County Fiscal Court and potentially affected cities for comment. The local conservation board evaluates any comments received and votes on the application. If approved, the petition is then submitted to the Kentucky Division of Conservation in Frankfort.

"It sets the land up to stay agricultural," Burnett explained when asked about the program's benefits. "The tax rates would be assessed at agricultural value and it cannot be annexed into the city limits because it's agricultural land."

Land enrolled in the Agricultural District Program also cannot be condemned without mitigation, is eligible for deferred assessment costs when water lines are extended, and receives extra points when applying for state Cost Share or to the Purchase of Agricultural Conservation Easements (PACE) Program.

Participation is strictly voluntary, and a landowner may withdraw land at anytime without penalty or without jeopardizing the status of the existing agricultural district.

Burnett said there are currently three agricultural districts -- totaling 3,208 acres -- located in Pulaski County around the southern corridor of Ky. 914. They were established in 2007.

"The program's been going on well before that," he added.