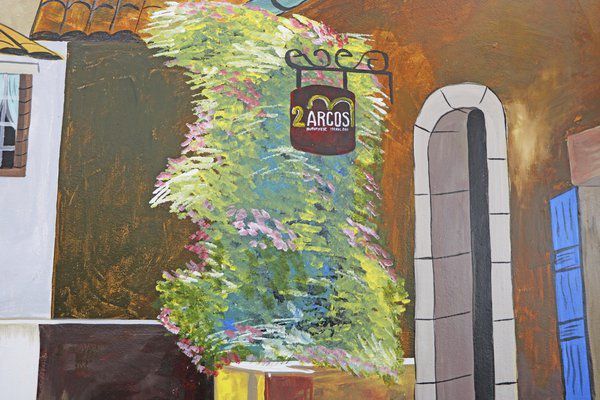 One of the murals that line the walls of Dos Arcos. 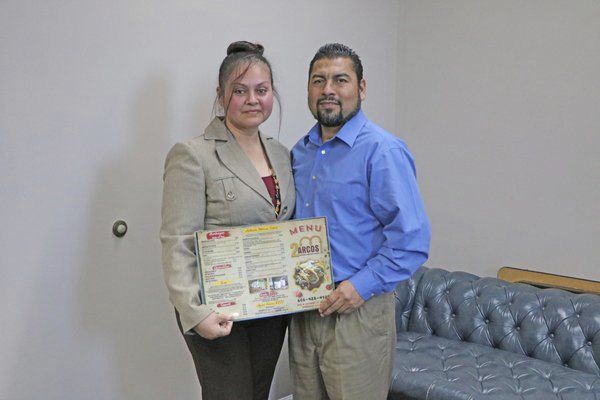 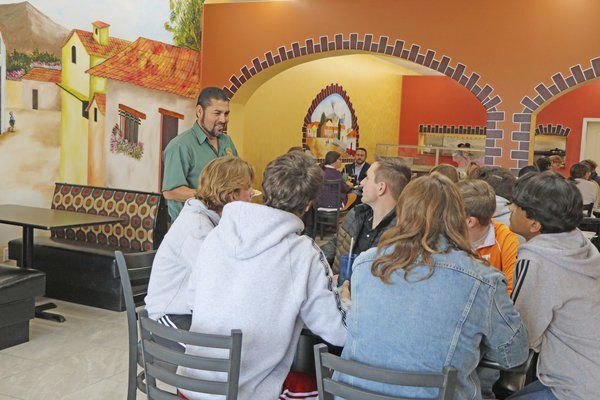 Jose Jarillo serves Somerset High School students during a kitchen test for the restaurant, held Nov. 21. The students are part of a marketing class who will help the restaurant by creating a professional plan for the owners.

One of the murals that line the walls of Dos Arcos.

Jose Jarillo serves Somerset High School students during a kitchen test for the restaurant, held Nov. 21. The students are part of a marketing class who will help the restaurant by creating a professional plan for the owners.

Coming soon, there will be a new restaurant - born of family and hope, of honoring where one comes from and willingness to accept help from the community - a Mexican restaurant to be called Dos Arcos (the Two Arches).

It will be located at 345 North U.S. 27, in the shopping center connected to Big Lots.

The plans for the family-owned restaurant are to open after the first of the month, sometime in the first few days of December, but husband Jose Jarillo and wife Anna Tejada already had a test run of the restaurant's operations one week ago, hosting a lunch for Debbie Harris' Advance Marketing class from Somerset High School.

Most of the finishing touches are already in place. That includes the walls and the two arches - the feature that gives the restaurant its name - being decorated by murals painted by Richmond artist Luis Melendez Reyna.

According to Tejada, the murals were chosen to represent the small towns in Mexico where she and many others are from.

"Those murals that you see, it reminds us of the streets of the Mexican town where when we were little we worked hard."

Tejada told the story of her and her eight siblings growing up in one of those small towns.

She explained that all of the kids would help her mother cooking meals, and those meals would feed more than just her family.

"It was a small village. It was a poor village. The kids would smell the food at our house and they would go to our house. And my mamma was not cooking just for the nine kids, but the friends of the kids as well. So we always had a lot of food."

Several years ago, she came to the United States, originally settling in Chicago before joining a sister who had moved to Somerset.

That sister, Teresa, was a major inspiration for setting up the restaurant.

"Seven years ago, I started working for Somerset Wood Products. And four years ago, I quit working because my sister was diagnosed with cancer, so I had to take care of her," Tejada said.

"During that time, the opportunity came to open this restaurant. I shared it with my sister, and she said, 'You must do it.'

That includes both back home and here in Somerset, with the family wanting to give back to the community, Tejada said.

She and Jarillo also want to learn from the community, with Tejada saying they are willing to listen to ideas.

Which is why the students in the SHS Advanced Marketing class were some of the first to sample the food. According to Harris, over the next few weeks the students will put together a professional plan and advertising package for the new restaurant, with the owners choosing the best ideas from what they come up with.

Tejada's husband explained that the idea for starting a restaurant came from the people Tejada cooks with at their church.

"People like what she cooked together with the ladies over there. She finally decided to do something like this," he said.

Jarillo said the dishes will be authentic Mexican from both the north and south of the country.

"Me and my wife are from the north, and there's another lady from the south (who cooks). So, we have included that in the dishes and recipes that we will be serving. It's a little bit different from others around."

Those dishes include tacos, in both Mexican and American styles; enchiladas in various forms; seafood dishes with names like Coctel de Camaron (shrimp cocktail) and Mojarra Frita (fried tilapia); and house specialties like Jarillo's Special - grilled chicken or steak served with rice and covered with a cheese sauce.

Louis Lane, age 88, of Somerset, KY, passed away on Thursday, July 9, 2020 at Somerset Nursing and Rehab. Funeral services are pending at this time and will be announced later. Lake Cumberland Funeral Home is entrusted with the arrangements for Louis Lane.

Billy J. Gooch, age 85 passed away Thursday, July 9, 2020. A funeral service will be held at 1:00 p.m. Tuesday, July 14, 2020 at the Liberty Baptist Church at Crab Orchard. Burial will follow in the Liberty Cemetery. The family of Mr. Billy J. Gooch will receive friends at the Pulaski Funera…