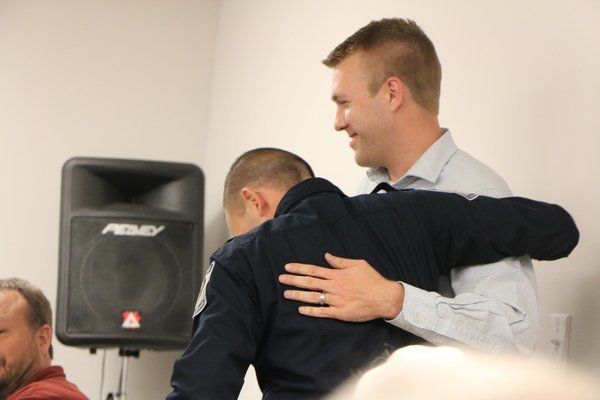 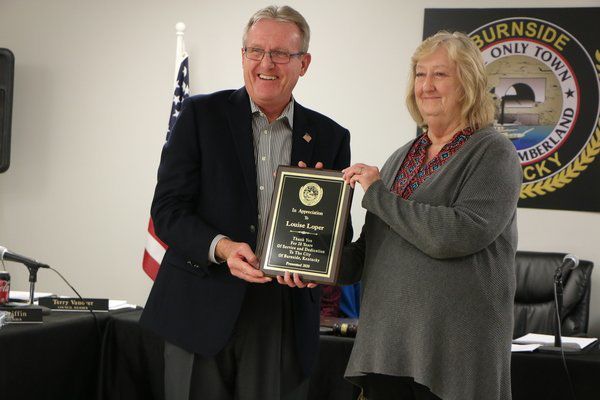 The first Burnside City Council meeting of 2020 was a night of celebrations and goodbyes.

Burnside Mayor Robert Lawson honored city utilities clerk Louise Loper for her two decades of service to the community. Loper is retiring and quietly accepted a plaque of appreciation and applause from those gathered in the council chambers Monday night.

"Everybody knows her when they come in" to the utilities office, said Lawson. "(Loper) has done the city a great service."

Lawson mentioned that new utility clerk Donna Haskins is already on the job.

Fortunately for the city, Burnside Police Chief Mike Hill isn't going anywhere. Hill, who has been heading up the Burnside Police Department since summer of 2017, was recognized twice on the evening -- first, receiving an award for being "Department Head of the Year" in 2019 for the City of Burnside, and then being presented a commission of Kentucky Colonel by Burnside City Councilor Brandon Becker. It's the highest title of honor bestowed by the Commonwealth of Kentucky, given by the governor and secretary of state to individuals with outstanding service and noteworthy accomplishments.

"When I moved here three years ago, I didn't know anybody in Burnside," said Becker. "I stand before you today, I can say that we have some of the finest people in Pulaski County right here ... One gentleman has stood out from the crowd. This young man is the type of person who doesn't just reach for the bar, he sets the bar. He is someone that all of us can look up to and learn from."

Becker was referring to Hill and added, "I am proud to call him my friend." The two shared a brief back-patting hug after Becker made the announcement.

Hill, however, had plenty to say himself. The police chief gave a detailed breakdown of the department's activity in the just-concluded year of 2019 for the council.

"During the past 12 months, we lost two officers (and) hired one patrol officer, bringing our total to six," said Hill. "We are still providing 24/7 police coverage to the City of Burnside. We gained accreditation through (the Kentucky Association of Chiefs of Police). We purchased a 2019 Dodge Charger to replace an aging vehicle, and a 2019 Dodge Ram to provide us with transportation during inclement weather."

The department conducted 1,300 traffic stops, made 600 arrests, and conducted 105 motorists assists, working as many collisions. They made 125 DUI arrests, responded to 51 domestic violence calls, and saw 217 seat belt violations. They responded to 2,197 calls for service, and overall, made 6,000 connections.

The average time spent on a call or complaint was 30.5 minutes, and officers had an average response time of 2.3 minutes to each call for service.

Hill also recognized Burnside Officer Eric Thomas for making the most amount of arrests of impaired drivers in Kentucky over the past year of departments of one to 10 people. Thomas made 88 such arrests.

Burnside Fire Chief James Martin had his own numbers to offer the council about 2019. The Burnside Fire Department responded to 240 total runs, including 16 structure fires, 12 fire alarms, eight vehicle fires, eight grass or wood fires, and 31 motor vehicle collisions with injury, in Burnside and surrounding districts to which the department responds. Martin also proudly noted that the BFD is now a certified extrication fire department, which requires "a lot of training that goes on behind closed doors," he said.

Burnside Tourism Director Frank Crabtree, Jr., also had a year-end report to share. With thousands and tens of thousands of people at events like the Independence Day celebration, Christmas Parade, and FLW fishing tournament, Crabtree sees the potential to build some "hype" in Burnside in 2020 and create an even stronger image for the city.

"The hype that's there around our community right now and the things that we're doing shows a lot of promise and people believe in our abilities," said Crabtree. "That, to me, moving forward, is something I want to capitalize on."

In other Burnside City Council business:

• The council approved the bid by Rusty Light to work on the Burnside sidewalk project, but not without some difficulty getting there. The first bid (of $20,073) was introduced was by Jason Mink, but four of the six councilors (Mike Lynn, Randy Berry, Terry Vanover, and Dwayne Sellers) voted "no" to it. Lawson then mentioned BMB Lawn Works (with a bid of $21,709), but again, four councilors voted against -- Becker instead of Sellers this time. Rusty Light ($23,500) was finally approved but only with Sellers abstaining because he's a friend of Light, who did work on the Burnside City Hall roof.