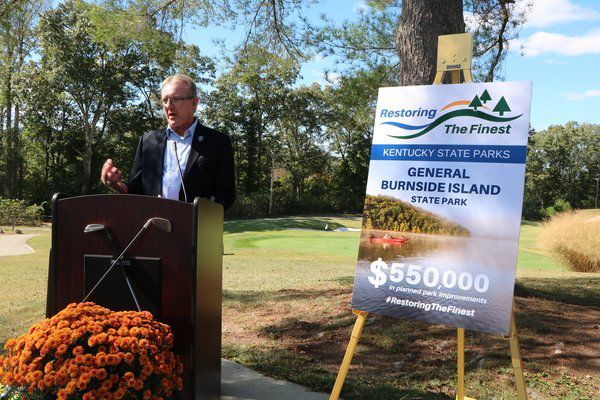 Burnside Mayor Robert Lawson spoke at the Burnside Island Golf Course Thursday to help announce that $550,000 in state funds had been secured to make improvements to the park's campgrounds. 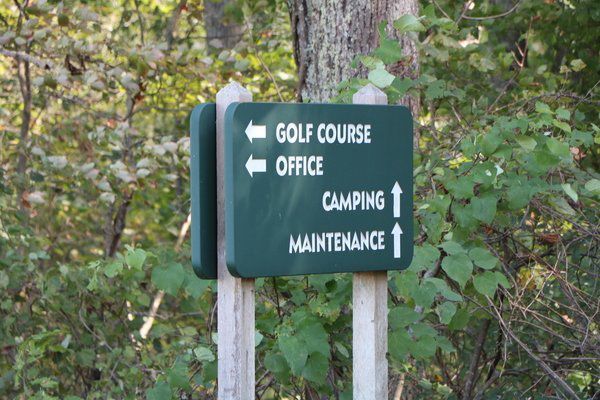 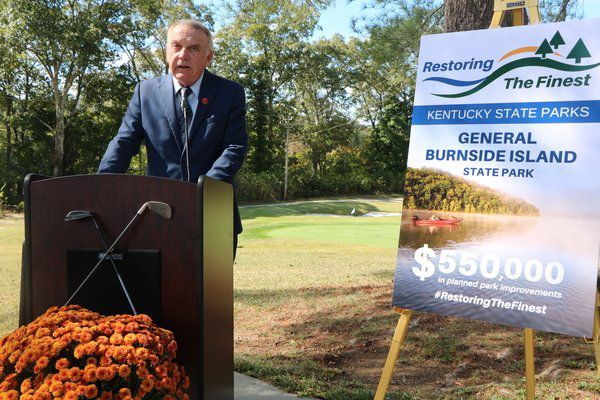 Kentucky Parks Commissioner Donnie Holland was at Burnside Island Thursday for the announcement that $550,000 would dedicated toward improving the park's camping facilities.

Burnside Mayor Robert Lawson spoke at the Burnside Island Golf Course Thursday to help announce that $550,000 in state funds had been secured to make improvements to the park's campgrounds.

Kentucky Parks Commissioner Donnie Holland was at Burnside Island Thursday for the announcement that $550,000 would dedicated toward improving the park's camping facilities.

Camping is about to get a whole lot better in Burnside.

More than half a million dollars in state funding will be coming the way of General Burnside Island to help upgrade the state park's camping facilities.

"This is huge for the area," said Burnside Mayor Robert Lawson. "There are very few spots, especially in the wintertime, where Class A (motorhomes) can come through this area and pull up and stay. ... So this will be huge for Burnside Island."

Burnside Island is already regarded as a prime camping spot in this part of the state, but the planned improvements -- on which work is expected to begin in January -- will allow camping there year-round.

Local and state officials flocked to Burnside Island Thursday for the major announcement, including Kentucky Parks Commissioner Donnie Holland; Tourism, Arts and Heritage Deputy Secretary Regina Stivers; State Rep. Tommy Turner; Pulaski County Judge-Executive Steve Kelley; and park manager and Burnside City Councilor Mike Lynn, as well as Lawson. All of the above spoke outside the island's golf course pro shop, with a backdrop of the lush green golf course for which the park is so revered.

Burnside Island's campground is scheduled to have 35 sites improved with 50-amp electrical services, sewer lines, and frost-free water lines. This will include two sites compliant with the Americans with Disabilities Act, to help accommodate campers with special needs.

Burnside Island will be receiving approximately $550,000, via Kentucky State Parks, part of the Tourism, Arts and Heritage Cabinet. The money is part of the the "Refreshing the Finest Program" from 2016-18, which saw millions of dollars in added funding directed toward Kentucky State Parks. Gov. Matt Bevin and lawmakers approved a $50 million bond issue for the "Refreshing the Finest" campaign in state parks during the 2019 General Assembly.

"At the start of this administration, our state parks were facing $240 million in deferred maintenance," said Holland. "We are now able to make much-needed repairs and improvements for the parks and continue contribution to the tourism economy across Kentucky."

Holland was happy to revisit "beautiful" Burnside Island, where he has fished in FLW events in the past. "I'm a history buff too, and the history of what General (Ambrose) Burnside (of the Civil War) did here, using these hills as lookouts, it's a fascinating history that goes along with the park too," he noted. "Sometimes we forget."

He said that with campers getting bigger and bigger, as the camping industry continues to grow, the need is there for facilities that can properly accommodate the vehicles.

"What we've got to do with this campground, and many, many, many of our campgrounds, is start preparing for this huge influx of growth," said Holland.

Stivers said that when she and Holland came on board almost four years ago, "we learned that there was deferred maintenance at all of our state parks. ... There were legitimate safety concerns, and at some parks it was a challenge just to keep the doors open, let alone attract new guests, and that's not what we want. We want to keep the guests that are coming to our state parks, and they come annually to places like General Burnside (Island), and we want to attract new guests to our parks. They're wonderful assets to our commonwealth."

To that end, Stivers said, Bevin has dedicated $95 million to state parks to improve them, with the help and commitment of the state legislature.

"We are not finished asking the General Assembly for more funding to continue to improve our state parks," said Stivers.

Turner is one of those legislators, and said he was happy to be a part of that commitment made to improve Kentucky's state parks.

"You look at the things we've been able to do here," said Turner, praising the golf facilities, a redesigned Brian Ault Signature Series course.

Kelley said he was "proud" of the county he oversees.

"It's truly the best county in the state of Kentucky, if you ask me, and it just keeps getting better every day," said Kelley. "... There's so much to do (to make Pulaski County better) that we can't get to it all, but we have partners like (the state agencies) that are willing to help make this place better. It makes our job easier."

Lawson talked about his vision for improving Burnside -- which ideally includes the long-imagined state lodge as a Burnside Island goal.

"I don't want to stop with the campgrounds and the golf course," he said. "... We're sitting on a golden nugget. I feel like that nugget needs to be refined. This is a start ... but I've got a bigger vision than that.

"I want to see us grow," he added. "I know it's here. We can do it. One day, I hope to see that resort here where we bring these people in and they don't stay one day and play a round of golf, they stay a weekend, they stay here for a week, they stay here for two weeks. There's a lot to do in Pulaski County."