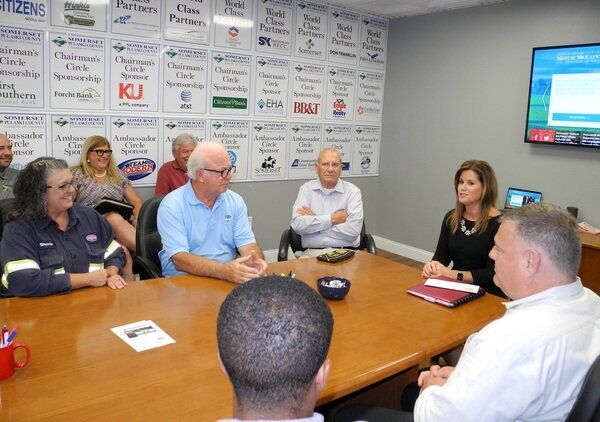 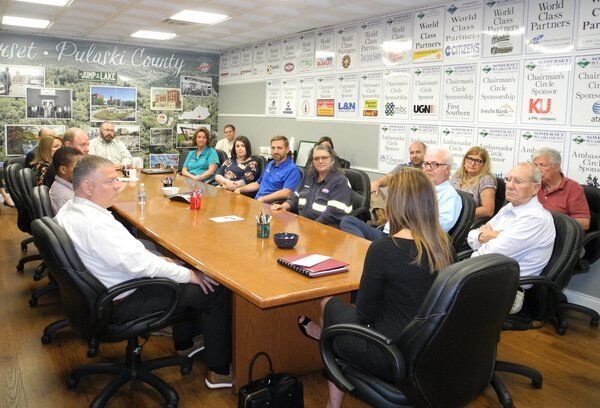 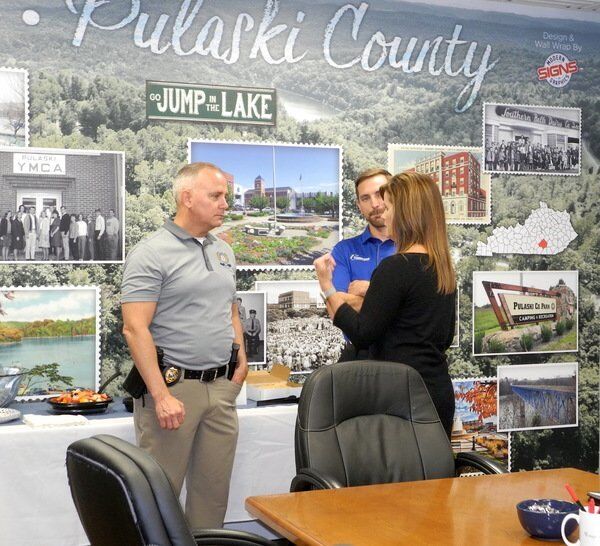 Taylor told the crowd that she wanted to familiarize herself with the state from east to west. "We've spent a lot of time traveling with the Senator over the last several recess periods," she said. "We're hearing three major things — folks won't come back to work…, supply chain issues are big particularly in manufacturing and inflation costs are really beginning to hit home."

"With this [COVID] virus, I've got projects that have been on the board for two years," Garland said.

Lonnie Lawson, President and CEO for The Center for Rural Development, pointed to the employment issue as a top priority.

"I know the senator has been working on it constantly," he said, "but we've got to find some way to get people back in the workforce. When folks can get a $40,000-plus job and they still choose to stay home, there's something wrong with the system.…So many of these small businesses are not going to survive if we don't."

Taylor noted that there are several reasons which play into why people aren't re-entering the workforce. "I think there's no question that the enhanced [unemployment] benefits are a part of that," she said. "Here, I'm assuming your schools have been back but childcare and schools played into decisions that people made and the reasons our government made the decisions we made to spend a lot money."

Taylor went on to say that while Sen. McConnell has been careful not to criticize Governor Andy Beshear, he disagrees with continuing the benefit when all other states surrounding the commonwealth — except Illinois — have discontinued it.

"I think they're hearing the same message we're hearing from employers and local leaders," Taylor said of those governors.

Another issue she discussed is the confusion regarding the guidelines for spending ARPA (American Rescue Plan Act) money, and allocating unspent money as infrastructure talks continue. "[Sen. McConnell] didn't vote for that," Taylor said, "but he recognizes that an awful lot of money coming to the state and local governments…We'll try to keep in touch on [guidance] as we learn things."

Garland asked Taylor to pass along thanks to McConnell for his support of tourism development in eastern Kentucky, which has suffered from the decline of coal.

"This region can become the next Gatlinburg with the right public-private investments," he said. "We've got four million people coming to Lake Cumberland on any given weekend. We don't have the adequate infrastructures, really, to handle that in one sense.…If the senator can take a look at tourism initiatives because I don't see much, other than broadband where people can work from home, opportunity for economic growth in those areas because of topography issues."

Chamber Executive Director Bobby Clue was optimistic about the local economy — noting that in the 10 years since he moved back to Somerset to lead the chamber, the community has grown considerably.

"It's not everyday that you see a community where everyone's pulling in the same direction," Clue said, something he largely credited to SPEDA (Somerset Pulaski Economic Development Authority) President and CEO Chris Girdler.

Clue added that the chamber has some 900 members, currently making it the seventh-largest in Kentucky and representative of 90 percent of the county's employed population. He told Taylor he appreciated her visit to Somerset.

"This is a great cross-section of our community here," he said of those attending Taylor's event. "You've got industry, some elected officials, economic development, technology and even a music festival.…You have strong support down in this area."

"Those of you who take time to serve [on chamber of economic boards], I know it's not an easy task," Taylor said.

Clue also spoke of how the chamber had served as a model — resuming in-person meetings as of July. Taylor responded that Sen. McConnell's office had taken notice of what was happening locally.

"I never ever thought we'd see anything like that in this country," Taylor said of the COVID pandemic. "I'm really proud of how you all have managed through that.…What you all are doing here is standing out."

Robert Parker, Lake Cumberland Regional Hospital CEO, noted that Monday was the first time in 14 and a half months that the hospital's COVID unit had zero patients from a high of 40-45. He accepted applause on behalf of LCRH staff but also noted the incredible work done by first responders during the pandemic.

Among the group present Monday was Matthew Hines, a chamber intern who is less than a week away from military training at Fort Benning, Georgia. His position was juxtaposed with veteran Clarence Floyd, who now advocates with the American Legion. Taylor thanked both for their service.

Taylor previously worked for Sen. McConnell from 1991 to 2000 as his South Central Kentucky Field Representative, based in Bowling Green. She began her new role as State Director in January, succeeding Terry Carmack, who was promoted to McConnell’s Chief of Staff in Washington, DC. Between those tours, Taylor served 18 years in government relations and public affairs at Western Kentucky University.