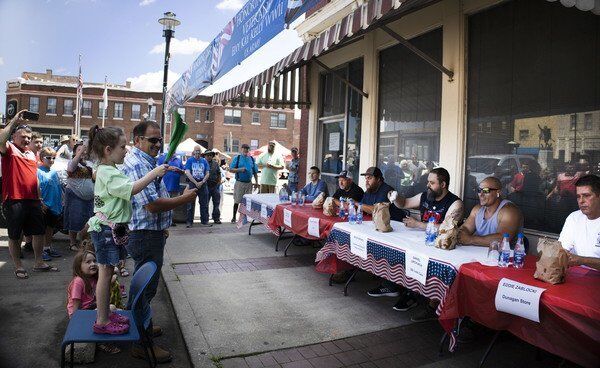 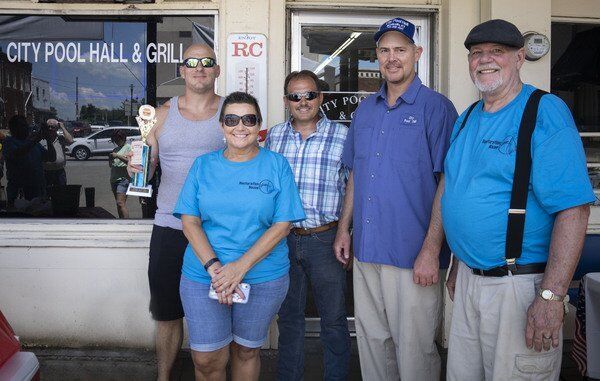 Daniel Upchurch, winner of the competition, stands with the event organizers from the Restoration House, Pool Hall and city leadership on June 5 in Monticello, Ky. 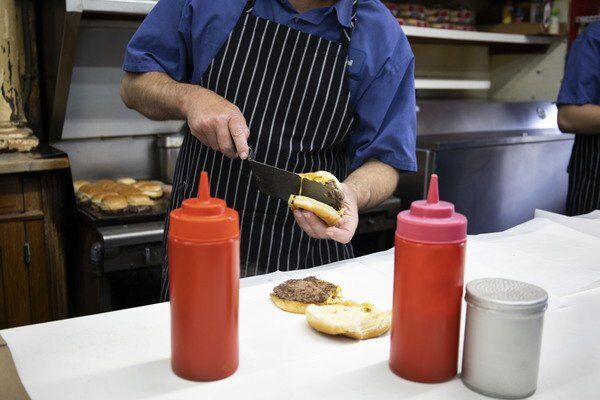 Pool Hall employees continued to make their classic burgers throughout the event on June 5 in Monticello, Ky.

Daniel Upchurch, winner of the competition, stands with the event organizers from the Restoration House, Pool Hall and city leadership on June 5 in Monticello, Ky.

Pool Hall employees continued to make their classic burgers throughout the event on June 5 in Monticello, Ky.

Daniel Upchurch took home the trophy after successfully eating 15 burgers and one bite of his 16th burger in the final seconds of this one hour competition on June 5. This was enough to beat fellow competitor Zach Sparks with his record of 15 burgers.

This event was held in downtown Monticello to help raise funds for the Restoration House, a women's-only sober living home, and their new roof. Local businesses sponsored each of the ten competitors and pledged a selected amount per burger eaten to be donated towards this cause.

"It feels good to do something good for a good project that's out there trying to help people and show them the love of Jesus to help them get their lives cleaned up," said Upchurch, who was sponsored by Jonathan Dobbs' 3D Lawn Care.

While this event was Upchurch's third competitive eating contest, it remained special for him because of it's charity for the Restoration House and his relationship with Restoration House President Elwood Bradley as his barber.

Bradley has envisioned this sober living house for two decades after his 23 years of experience as Wayne County Jail Chaplain, where he witnessed countless individuals become repeat offenders through their struggle with addiction and recovery.

"We thought that if we could get a place it could restore their lives and give them time to regain themselves and not go back," said Bradley, Founder of the New Beginnings Foundation. "When we began we were very concerned that the community wouldn't be receptive of a sober living house in the center of town, but what we have found out is that all of the community has surrounded us."

Bradley added, "This event is proof of that."

This also brought an opportunity to bring the community together as the downtown area offered live music, classic cars, vendors and a yard sale to help raise additional funds towards this cause.

Such hopes became successful as the summer weather, classic cars and the smell of these Pool Hall Burgers brought a great crowd downtown.

"This is a lot bigger turn out then I expected," said Jonathan Dobbs, District 4 Magistrate and organizer of the event. "This is probably one of the biggest crowds downtown has drawn in quite some time. You can see the roof is already underway with construction so that gives a little bit of insight to the folks who have shown up today that its for a great cause."

According to Jessica Burks, Restoration House Office Manager and Executive Assistant, an estimated $6,000 was raised towards their new roof through this event.

"We're anticipating maybe 150 to 175 burgers will be eaten today, not counting the regular customers, so it's been a great event," said Dobbs. "I'm in hopes that other community leaders will see this and maybe get a spark to think, 'Hey what can I do to help also.'"

Monticello Mayor Tracie Sexton also participated as the official time keeper of this competition and said she looks forward to future events in her community.

"I really like the community together, especially after so long with not being able to," said Sexton.

The Restoration House is eager to plan more downtown events and welcomes any support or donations toward their nonprofit organization.