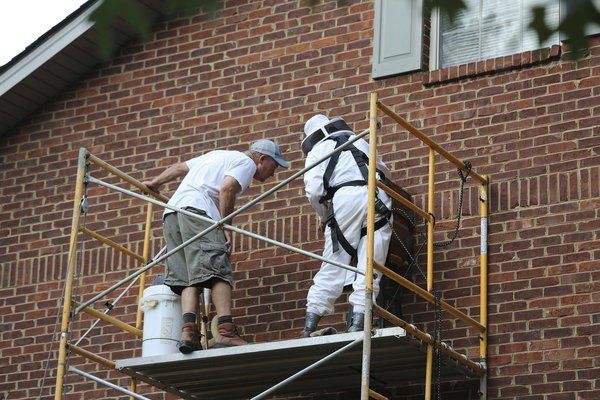 Bob McAlpin, left, and Katherine White, a beekeeper, inspect a dryer vent opening into which honeybees enter and leave a hive inside an Eagle Creek Apartment structure. McAlpin and White are trying to move the honeybees to a more convenient location. 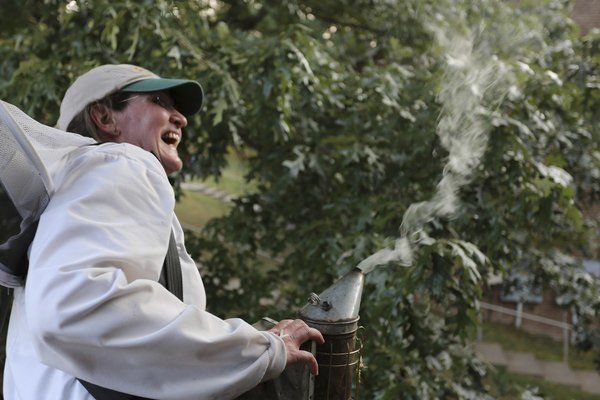 Katherine White, uses smoke to ward off honeybees as she tries to relocate a hive in an Eagle Creek Apartment building.

Bob McAlpin, left, and Katherine White, a beekeeper, inspect a dryer vent opening into which honeybees enter and leave a hive inside an Eagle Creek Apartment structure. McAlpin and White are trying to move the honeybees to a more convenient location.

Katherine White, uses smoke to ward off honeybees as she tries to relocate a hive in an Eagle Creek Apartment building.

Honeybees are some of the world's most valuable insects and Bob McAlpin is doing his best to save a hive that took up housekeeping (honey making) at a top level opening at his Eagle Creek Apartments off Monticello Street.

"They have been there at least a year," said McAlpin. The bees go into the building cavity through a dryer vent.

The honeybees have made honey but the sweetness is not easy to reach. Using a camera lens on an extension that can be inserted into the vent hole, honeycomb can be seen, McAlpin said.

Katherine White (wife of Dr. Barry White, family medicine specialist in Somerset), is an apiarist (beekeeper). McAlpin sought her assistance in moving the bees to a better location.

They built a scaffold high enough to place an empty hive near the dryer vent opening where the bees enter and leave. The plan is to entice the queen bee to enter the empty hive and the worker bees will follow.

There are three types of honeybees in a hive --- workers (no gender), drones (male) and queen (female).

Worker bees are workaholics, they simply work themselves to death gathering pollen, making honey and caring for the queen. Drones mate with the queen during a mating flight and the queen bee's role is production.

The queen bee is normally the only reproductive female in the colony. Egg laying begins in early spring, initiated when the first fresh pollen is brought home by the workers. Egg production will continue until fall, or as long as pollen is available.

At the height of her productivity, the queen could lay as many as 2000 eggs each day. A queen bee can live up to five years, but her period of usefulness rarely exceeds two or three years. Younger queens produce many more eggs, and older ones may produce excessive drones.

A worker bee's ability to fly far and fast has greatly contributed to the success of bees. They can forage up to three miles from their hives, and reach speeds of 15 miles per hour.

In recent years, numbers of honeybees, necessary for pollinating many crops, have reduced because of an external parasitic mite that attacks and feeds on the honeybees.

Called varroa mites, the mites attack both honeybees and brood. The mites suck blood from both the adults and developing brood, especially drone brood. This weakens and shortens the bee's life. Untreated infestations of varroa mites will increase and may kill colonies.

Healthy honeybees swarm in early spring and create new hives. If swarming bees are not corralled by a beekeeper, the relocating insects could become a wild swarm and set up honey making in a hollow tree. Often, before swarming, excess bees will cling together and hang outside the hive.

Key to catching the swarming honeybees is to get the swirling bees to settle, possibly on a tree limb. Often, the flying queen will be induced to lite by tossing dirt or making a banging noises. When she lites, for her protection, swarming worker bees will gather around her in an oblong ball.

Then, as McAlpin and White are trying to do, get the queen bee to enter a new hive, and the workers and drones will follow.