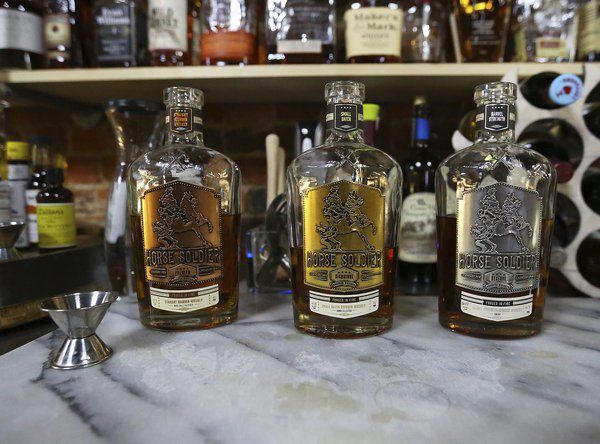 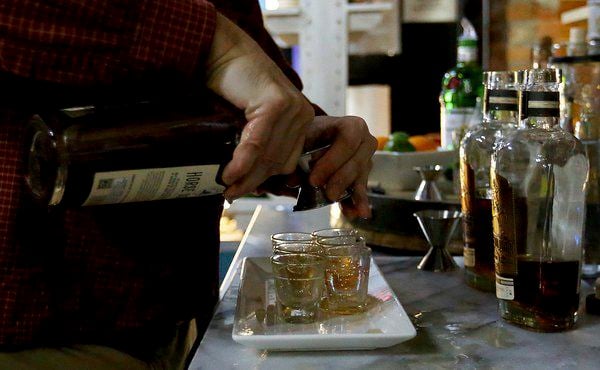 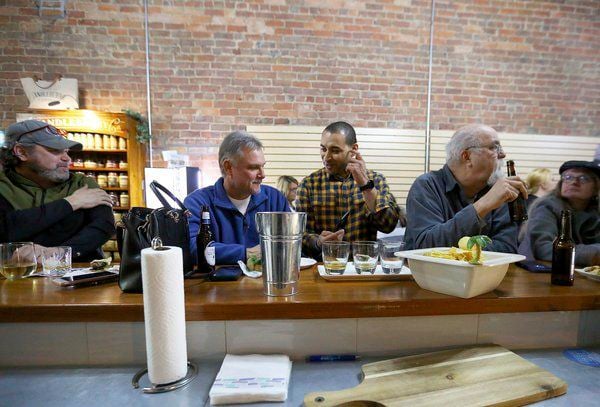 The Mole Hole was packed Thursday full of people wanting to be among the first to try Horse Soldier Bourbon the day it arrived in Somerset.

The Mole Hole was packed Thursday full of people wanting to be among the first to try Horse Soldier Bourbon the day it arrived in Somerset.

Horse Solider Bourbon rode into town this week and won its first battle for the hearts (and palates) of Pulaski County bourbon aficionados.

On Thursday, Horse Soldier Bourbon, the brand made by former Green Berets who went into Afghanistan on horseback following the events of 9-11, was made available to Somerset and elsewhere in Kentucky finally. It was a big occasion locally, since American Freedom Distillery has pledged to produce the bourbon right here in Pulaski County.

And Somerset Mayor Alan Keck, a driving force behind the push to land a bourbon distillery here, had to be excited when he learned that liquor stores that carried the product "sold out in a couple of hours."

Or as Keck put it, the bourbon went on the shelves Thursday, "and off the shelves."

Keck wasn't kidding. Tyler Crouch of Wildcat Beer, Wine and Spirits on U.S. 27 said that Thursday was "pretty crazy" after getting in their shipment of Horse Soldier.

"We got a case of each (kind of the bourbon) they had, and sold out in an hour," he said. "(Friday) we had to make a special order, and got six more cases of each."

Not that Crouch is complaining — Wildcat is happy to sell so much, so quickly.

"It's a good thing to get their name out there with them coming here," he said of Horse Soldier.

Downtown at the Mole Hole located on Fountain Square, owner Tammy Hoehler was serving up shots of Horse Soldier Bourbon on Thursday for people who wanted to try it. The store — which features a bar as well as its numerous gift items — was packed with an elbow-to-elbow crowd that evening.

"(Thursday) we got our Horse Soldier Bourbon in; we didn't expect it until March," said Hoehler. After learning she'd be getting it much sooner, however, "I decided I wanted to be the first one to pop it open behind the bar — the first pour, the first tasting."

Flights — a selection of smaller sizes of different alcohol products — were purchased by people who wanted to try all of what was available. There was the Premium Straight Whiskey (87 proof), Signature Small Batch (95 proof), and Reserve Barrel Strength (117 proof).

While Hoehler loved the enthusiasm around the product, she was even more impressed with the quality of it.

That seemed to be the general opinion of the crowd there at the Mole Hole Thursday as well.

Gary Beasley said that the "Small Batch is very, very good," and "then the Barrel — oh my god."

Gary was excited to have Horse Soldier come to Somerset. "Anything that we get for the downtown, yeah. Whoever thought the Mole Hole would put something like this in here — that's genius."

Brad Bigelow had tried the Straight and Small Batch when he offered his take.

Is he excited to see something like this come to Somerset? "Absolutely, it's about time."

After being elected in 2018, Keck made it a mission to include the already tourism-heavy City of Somerset in Kentucky's famed Bourbon Trail. In late December, he and SPEDA President and CEO Chris Girdler announced that plans were on to put a distillery producing Horse Soldier Bourbon in Somerset, launching a two-phase, $50 million project that will add 56 direct jobs.

Horse Soldier Bourbon is currently distilled in Columbus, Ohio, and bottled in Florida. Particulars on when and where the distillery will be located in Somerset are not yet available.

American Freedom Distillery was founded by by members of the first U.S. Army Special Forces unit to enter Afghanistan following the infamous 9/11 attacks. The small teams of Green Berets, mounted on horseback, rode into northern Afghanistan. These men became known as "The Horse Soldiers" — thus the name of their brand of bourbon. The 2018 film "12 Strong" is based on their story. Many of the soldiers were stationed at Ft. Campbell, Ky.

In 2011, a statue commemorating their historic mission — aptly titled “America’s Response” — was unveiled at Ground Zero, in New York City. Today, the bronze, mounted soldier serves as the symbol of Horse Soldier Bourbon.

The Horse Soldier glass bottle is molded by steel recovered from the World Trade Center, in order to commemorate the lives lost on 9-11, according to americanfreedomdistillery.com.

In January, a thick crowd poured into the Somerset City Council chambers to meet some of the individuals behind Horse Soldier Bourbon in a special introduction to the public.

Said Horse Soldier's Scott Neil, "This really is the next chapter of our lives. All we want out of America is the American dream we've been defending."

That dream is well on its way to being a reality after impressing the citizens of their new Kentucky home this week.

"It's a special night. I think that people are excited to try the bourbon that's going to be made here," said Keck in the midst of the Mole Hole throng Thursday. "It's neat to see a big crowd excited to try it as well."

Ruby Bolin, 74, Nancy, passed away Wednesday, September 22, 2021 at Lake Cumberland Regional Hospital. Arrangements are pending and will be announced later by Morris & Hislope Funeral Home. Condolences may be expressed to the family at: www.morrisandhislope.com.