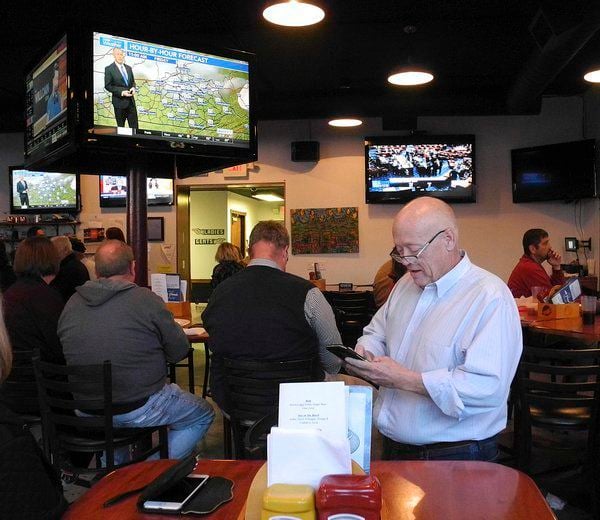 In addition to supporters watching the vote with him live, Judge David Tapp was constantly receiving messages Tuesday evening as he was officially confirmed to the U.S. Court of Federal Claims. 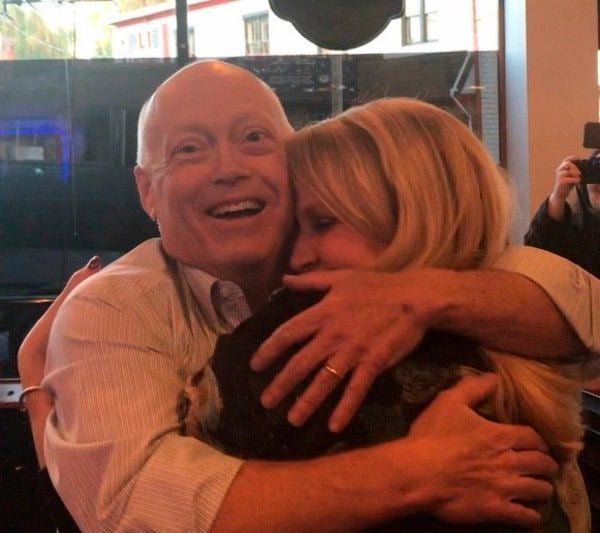 Pulaski Circuit Judge David Tapp hugs his wife Debbie as his confirmation to the U.S. Court of Federal Claims is announced Tuesday evening.

In addition to supporters watching the vote with him live, Judge David Tapp was constantly receiving messages Tuesday evening as he was officially confirmed to the U.S. Court of Federal Claims.

Pulaski Circuit Judge David Tapp hugs his wife Debbie as his confirmation to the U.S. Court of Federal Claims is announced Tuesday evening.

As Kentuckians went to the polls Tuesday to determine who will lead the commonwealth for the next four years, another big vote for Pulaski County was taking place on Capitol Hill.

Pulaski Circuit Judge David A. Tapp was confirmed by the United States Senate as a judge for the U.S. Court of Federal Claims by a final vote of 85 to 8. He watched the vote surrounded by family, friends and colleagues gathered at Friends Sports Bar & Grill in downtown Somerset.

On the circuit bench since 2005, Judge Tapp's career has included work as both prosecutor and private attorney, organized crime investigator, pretrial officer and deputy sheriff. He received his juris doctor from the University of Louisville Louis D. Brandeis School of Law and his Master's of Science degree in Criminal Justice Administration from Chaminade University in Honolulu, Hawaii.

In 2004 the then-Somerset lawyer was elected District Judge for Pulaski and Rockcastle Counties. After eight months in district court, Tapp was appointed by Gov. Ernie Fletcher as Circuit Judge. In those subsequent years, Judge Tapp has made a name for himself volunteering to oversee the alternative sentencing program known as drug court -- which has become a national model helping provide new opportunities for those with substance use disorder who find themselves in the legal system.

Tapp was nominated for the post by President Donald Trump back in March. After testifying before the Senate Judiciary Committee, members of that body forwarded the nomination for full Senate consideration in June. His confirmation has been shepherded by Senate Majority Leader Mitch McConnell.

"Judge David Tapp has just about done it all since he first became a state judge nearly 15 years ago," Sen. McConnell said Tuesday. "He's heard cases at multiple levels of the state's judiciary, ruling on a wide range of issues. As a volunteer drug court judge, Judge Tapp has earned national praise for promoting long-term recovery in the courtroom. He's also developed a sterling reputation for fairness throughout Kentucky and around the country.

"And now, David will bring a lifetime of public service and achievement to the Court of Federal Claims, where I'm confident he'll continue making us all proud," McConnell concluded.

While a timeline for the transition has yet to be determined, Tapp will be one of 16 judges who serve 15-year terms. The Court of Federal Claims is authorized to hear primarily money claims founded upon the Constitution, federal statutes, executive regulations, or contracts, express or implied in fact, with the United States. Though headquartered in Washington, DC, the court has national jurisdiction -- allowing judges to travel all over the nation to hear cases for the convenience of litigants.

"I'm grateful for the bipartisan support demonstrated by tonight's Senate vote and especially grateful for the confidence of President Trump and Majority Leader McConnell in advancing my nomination for the United States Court of Federal Claims," Judge Tapp said Tuesday evening. "I will greatly miss my colleagues within the Kentucky judiciary and the fine attorneys I've been privileged to work alongside. Among the many blessings in my life, none compare to the love and commitment of my family and friends. As we begin the transition, I look forward to continuing to serve the people of Kentucky and now, the United States."