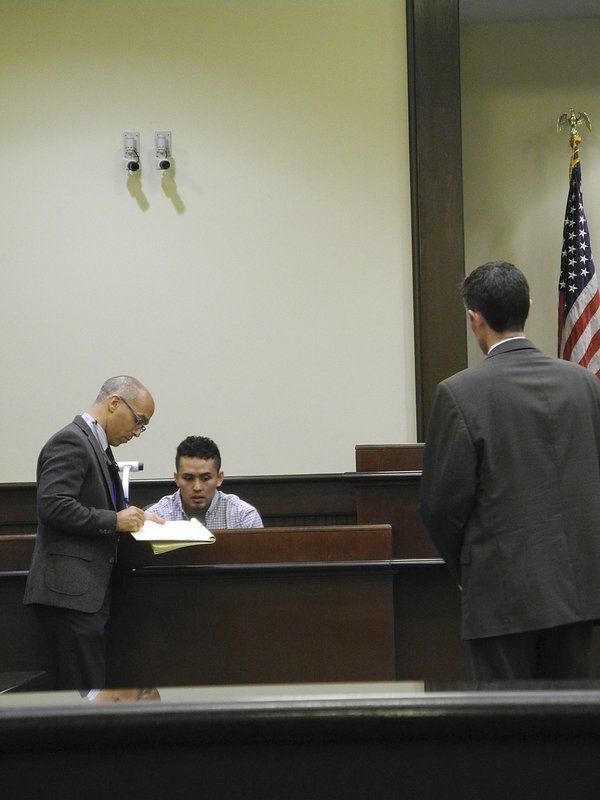 Heberto Romero-Ordonez (seated) testified through an interpreter (standing at left) as he was questioned by Assistant Commonwealth's Attorney David Dalton (standing at right). 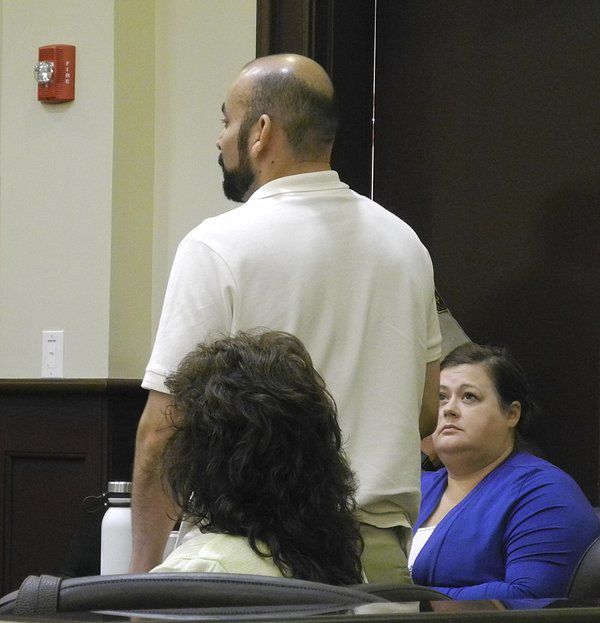 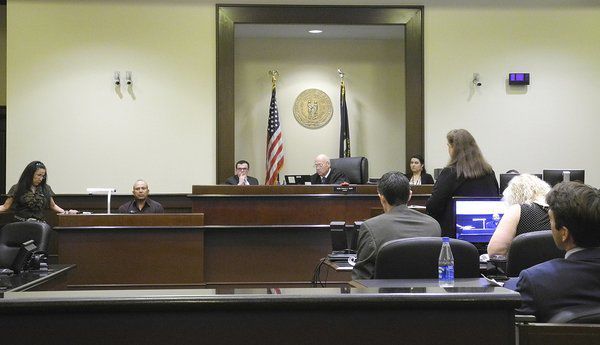 Defense attorney Andrea Simpson (standing at right) questions Edgar Martinez, brother of the victim (seated, second from left), who testified through an interpreter (standing at left) on Wednesday morning. 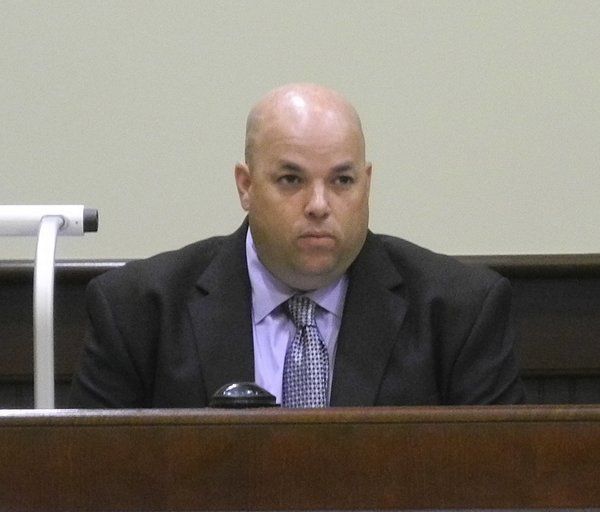 Detective Larry Patterson of the Somerset Police Department testified Wednesday during the trial of Humberto Mesa-Vasquez, who has been accused of the February 24, 2018, murder of Jorge Martinez.

Heberto Romero-Ordonez (seated) testified through an interpreter (standing at left) as he was questioned by Assistant Commonwealth's Attorney David Dalton (standing at right).

Defense attorney Andrea Simpson (standing at right) questions Edgar Martinez, brother of the victim (seated, second from left), who testified through an interpreter (standing at left) on Wednesday morning.

Detective Larry Patterson of the Somerset Police Department testified Wednesday during the trial of Humberto Mesa-Vasquez, who has been accused of the February 24, 2018, murder of Jorge Martinez.

Jurors should begin deliberating this (Thursday) morning in the case a man accused of fatally shooting a fellow immigrant, then enlisting his cousin and estranged girlfriend to help burn the body.

Humberto Mesa-Vasquez (also known as Alejandro A. Vasquez Cabrera), 36, of Somerset, is standing trial on charges of Murder, second-degree Arson, Tampering with Physical Evidence and Abuse of a Corpse in connection to the February 2018 murder of 38-year-old Jorge Martinez.

Martinez was found the morning of February 24, 2018, in a burnt out vehicle on Rush Branch Road.

In the second day of trial, Assistant Commonwealth's Attorney David Dalton completed the presentation of his case to the 13-member jury. Wednesday began with testimony from lead Detective Larry Patterson of the Somerset Police Department, who explained why some pieces of evidence were sent to the state lab for testing and others weren't.

Patterson detailed how the investigation also led to complicity charges against the ex-girlfriend of Mesa-Vasquez, Gloria Ortega, as well as his roommate, Heberto Romero-Ordonez -- both of whom have already accepted plea agreements and would testify about their roles later in the day.

The prosecution also called the victim's brother, Edgar Martinez, who testified through an interpreter that Jorge lived with him about three houses up hill from the South Main Street apartment where Jorge was fatally shot. He described his brother as a responsible, quiet, honest person who always tried to help people. "We had a lot of friends here," Martinez said.

Two of those friends were his co-workers, Romero-Ordonez and his father Herberto Romero-Galvez. They lived at the 431 S. Main with Mesa-Vasquez, a cousin to the younger man. While Galvez has since been deported back to Mexico, Ordonez testified that all four men were drinking in the apartment the night of February 23, 2018, when Mesa-Vasquez went into his bedroom then came back into the living room and shot Jorge.

Romero-Ordonez testified that he didn't know why the shooting occurred, but that he followed his cousin's instructions to help him with the body because he was scared that Mesa-Vasquez would shoot him as well.

According to Romero-Ordonez, Mesa-Vasquez called Ortega and ordered her to back her vehicle (a Chevy Tahoe) into the driveway. Once she arrived, Mesa-Vasquez wrapped the body in a sheet and was assisted by Romero-Ordonez in carrying it to the car. Romero-Ordonez testified that the defendant then ordered him to get into the Tahoe with Ortega while Mesa-Vasquez himself drove Jorge's vehicle (a 1997 Ford Escort LX) and led them to the place on Rush Branch Road where the two men transferred the body to the driver's seat of Jorge's car. Romero-Ordonez testified that his cousin then poured gasoline over the body and the car, then set it on fire. They returned to S. Main St. in Ortega's Tahoe.

Romero-Ordonez testified that once Mesa-Vasquez left to dispose of the chair that Jorge had been sitting in, he and his father went to their boss' home "to ask for help." When asked why he didn't call the police, Romero-Ordonez responded, "We don't speak English."

Much of the afternoon was devoted to testimony from expert witnesses in the fields of ballistics, gun shot residue, serology (bodily fluids) and DNA. Once Dalton rested his case, defense attorney Andrea Simpson advised the court she would not be calling witnesses after conferring with her client.

Simpson's co-counsel Forrest Brock did move for a directed verdict in favor of their client -- arguing that only one prosecutorial witness had directly identified Mesa-Vasquez as the guilty party while the investigators and experts could not determine that conclusively. Noting that the question of witness credibility is one for the jury, Pulaski Circuit Judge David Tapp denied the motion.

The trial is expected to resume this morning with closing arguments and jury instructions.