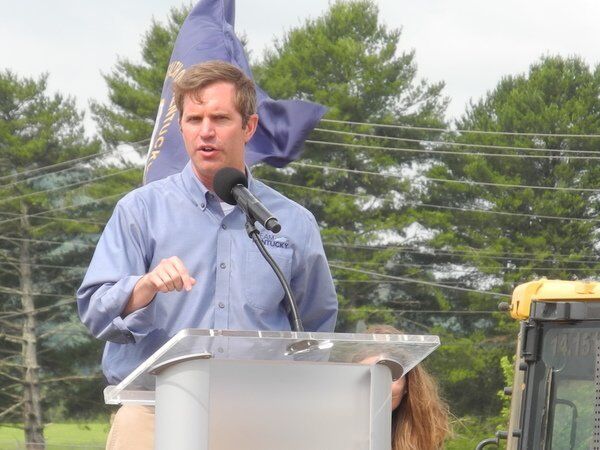 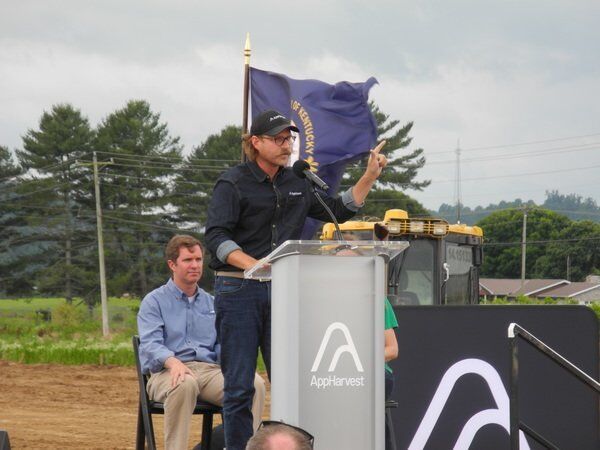 AppHarvest Founder and CEO Jonathan Webb talks about his company's vision for ag-tech in eastern Kentucky. 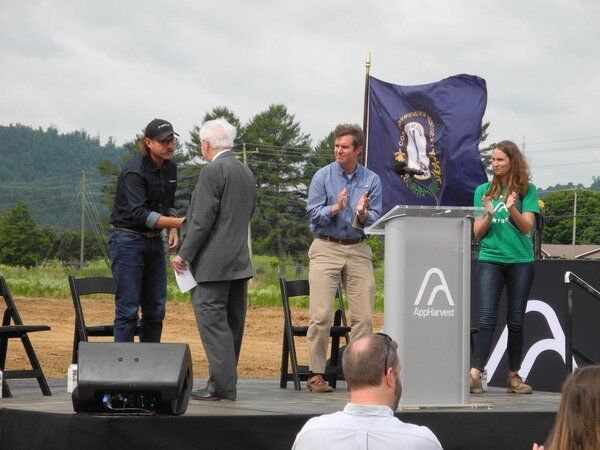 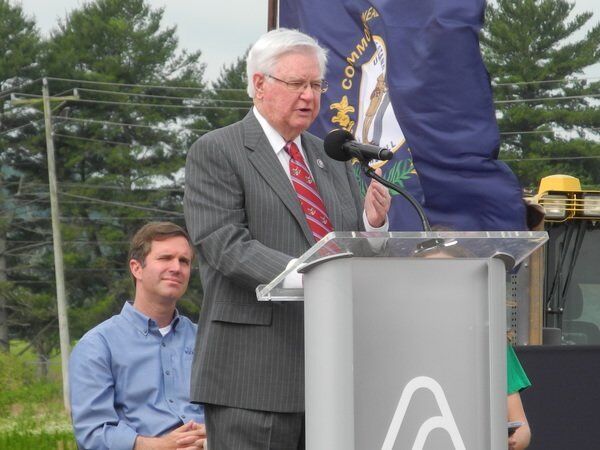 Congressman Hal Rogers speaks while Gov. Andy Beshear looks on during Monday's announcement of a new AppHarvest facility in Somerset. 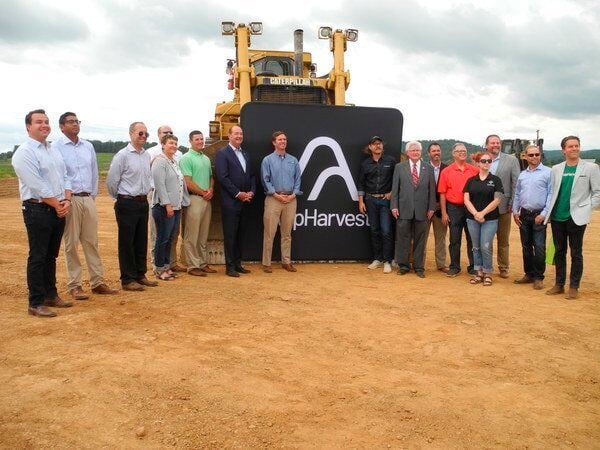 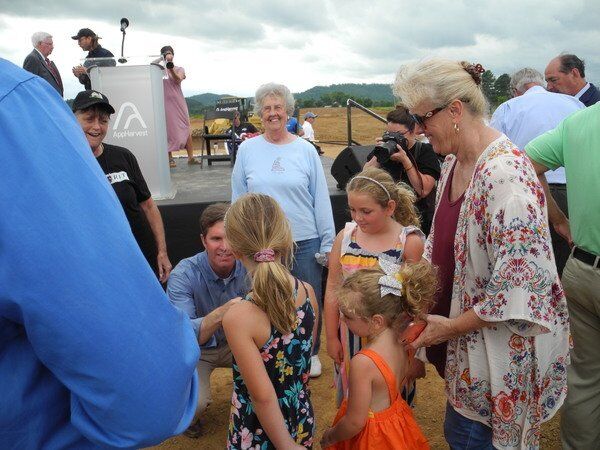 Gov. Andy Beshear greets the great granddaughters of Jeanette Wright, standing in front of the stage, who owned the farm where AppHarvest plans to build its 30-acre facility.

AppHarvest Founder and CEO Jonathan Webb talks about his company's vision for ag-tech in eastern Kentucky.

Congressman Hal Rogers speaks while Gov. Andy Beshear looks on during Monday's announcement of a new AppHarvest facility in Somerset.

Gov. Andy Beshear greets the great granddaughters of Jeanette Wright, standing in front of the stage, who owned the farm where AppHarvest plans to build its 30-acre facility.

Local and state officials welcomed the start of summer with news of a major ag-tech investment to expand the Valley Oak Commercial Complex.

Somerset's own Congressman Hal Rogers joined Governor Andy Beshear Monday morning in announcing the 30-acre sustainable indoor farm to be built by AppHarvest, a leading ag-tech company on a mission to feed the world from the heart of Appalachia.

"This is really a dream coming true," Congressman Rogers said, referring to his long-held belief that young people shouldn't have to leave the region to find careers. "We're so indebted to [AppHarvest CEO Jonathan Webb] for your vision and determination to make good things happen, especially in eastern Kentucky.…We're on the leading edge of something very big strategically for the community and the state, for your families, but also to the nation."

The public corporation focuses on farming which uses up to 90 percent less water than open-field agriculture and only recycled rainwater. Somerset's high-tech indoor farm, expected to be completed by the end of next year, will grow strawberries year-round with a multi-million-dollar investment expected to add hundreds of new jobs to the local economy.

The ceremony marked the culmination of months of work on behalf of the Somerset-Pulaski Economic Development Authority (SPEDA) to find the right location for AppHarvest's facility and introduce them to Somerset and Pulaski County. Somerset Mayor Alan Keck paid tribute to SPEDA President and CEO Chris Girdler and AppHarvest Vice President of Development Matt Gosnell for their work behind the scenes to bring the project to fruition.

Webb credited Congressman Rogers for his work over the last 40 years to establish the infrastructure needed to attract new industry to eastern Kentucky as well as Gov. Beshear for his support of the sustainable model.

"It's going to take everyone to really make this industry what it can be," Webb said. "…We're bringing food production back. Right here in this community, we're going to have one of the largest strawberry facilities growing indoors with some of the most technologically advanced systems."

Gov. Beshear in turn praised House Speaker Pro Tem David Meade -- in attendance with fellow Republican legislators Senator Rick Girdler and Representative Shane Baker -- for how the leadership in both parties came together at the close of the General Assembly to focus on investment in job creation and infrastructure.

"This teamwork is going to be so important because there's nothing red or blue or Democrat or Republican about a good job," Beshear said. "A good job is what feeds our families; it helps educate our kids; and it's what's going to move us forward."

Jeanette Wright, matriarch of the farm family that had owned the site, told the Commonwealth Journal it's a wonderful feeling to see the land continue with agricultural purpose. "It's almost unreal," she said. "It's great to be part of such a big movement and I think about my little ones. I have three great granddaughters here."

AppHarvest's 170-acre purchase from the Wright Family not only expands Valley Oak Commerce Complex but is also situated near the new SPEDA Commerce Park, a 142-acre development that will offer certified build-ready sites to industrial prospects.

Both industrial parks soon will be enhanced by the construction of a cloverleaf interchange at Ky. 80 and Ky. 461 as well as the widening of Ky. 461. The $69 million road project will be complete in 2023.

AppHarvest's goal is to operate 12 high-tech indoor farms by the end of 2025. Its facilities produce non-GMO fruits and vegetables free of harsh chemical pesticides, to be distributed to top U.S. grocers and restaurants. Because of the company's strategic location in Appalachia, AppHarvest can reach nearly 70 percent of the U.S. population in a day's drive, with up to 80 percent less diesel fuel compared to existing growers in Mexico and the southwestern United States.

"We have the ability," Webb said. "The world is watching us. I've had calls from dignitaries in southeast Asia and dignitaries in the Middle East asking what is going on in Kentucky.…We're at the cutting edge of agriculture. We have to lead together."

"We're really excited to be partners with you in this venture going forward," Judge Kelley said, adding that collaboration has been key to the community's recent success. "Who would have thought that we could supply the eastern seaboard and all points in between with fruit?…I love the idea; I loved it so much I went out and bought some stock, so I'm pulling for you in more ways than one. Folks, let's welcome AppHarvest and collaborate with them. Let's work to make sure they prosper here in Pulaski County like we know they can."

Somerset Mayor Alan Keck said he looks forward to the growth that Somerset and AppHarvest can achieve together -- adding that he can see the area becoming the ag-tech capital of the world.

"Agriculture has a special place in the history of Kentucky…," Mayor Keck said, "but we also look to the future with AppHarvest. They're changing an industry. They're changing the future, and they're brightening it in so many ways.…In the end, it's not just about us. It's about helping other people, building up and not tearing down. That's exactly what they're going to be doing on this beautiful land, so AppHarvest, Pulaski County and Somerset, let's grow."

Learn more about AppHarvest at https://www.appharvest.com/.

Lori Ann McMullin, 50, of Yosemite, passed away Monday, October 25, 2021 at her residence. She was born August 20, 1971 in Indianapolis, Indiana; daughter of Robert & Iva (Dick) McMullin. She is survived by her parents and a brother, Ricky McMullin of Texas. She is preceded in death by t…