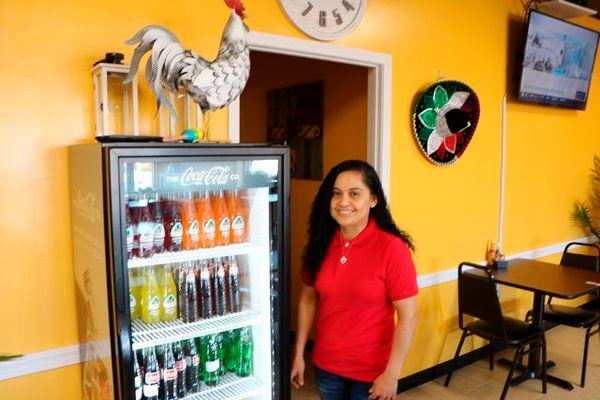 Olivia Johnson prepares her own brand of Mexican food at Pollo Feliz. 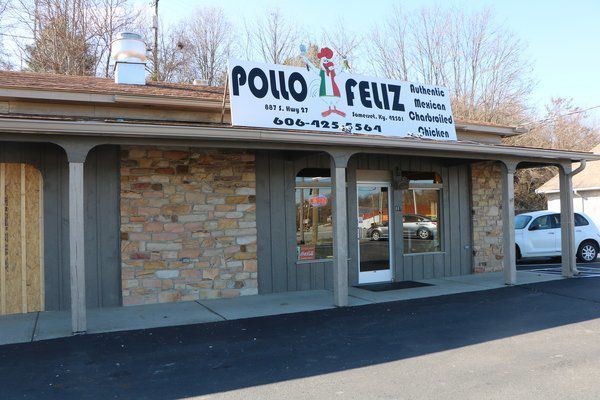 Pollo Feliz -- a "happy chicken" -- is located at stoplight no. 9 on South U.S. 27. The restaurant opened Monday and serves Mexican food and a variety of chicken dishes.

Olivia Johnson prepares her own brand of Mexican food at Pollo Feliz.

Pollo Feliz -- a "happy chicken" -- is located at stoplight no. 9 on South U.S. 27. The restaurant opened Monday and serves Mexican food and a variety of chicken dishes.

It's true. There are a lot of new chicken places in Somerset these days.

But there's only one "happy" chicken place.

Pollo Feliz opened Monday along South U.S. 27, at stoplight no. 9, featuring flavors inspired by owner Olivia Johnson's Mexican heritage. And her hope is that eating there will make Pulaski Countians just as happy as she is to cook for them.

"It has been a lifelong dream to someday have my own restaurant," said Olivia. "I have always loved to cook. It always puts a smile on my face when people say they loved my food."

Olivia grew up in Veracruz, Mexico before coming to the United States. Her family operates the north Speedy Taco restaurant, where she used to work as a server. It was there that she met Pulaski County Sheriff's Office Detective Joey Johnson. The two fell in love and married in 2018. Joey now owns and operates Pollo Feliz with Olivia, which has been a labor of love.

"I love to cook as much as Olivia does," he said. "Before I got into law enforcement (in 2000), I wanted to open my own restaurant as well. We both prayed to God about it and the timing was right so we did."

Olivia wanted a name for the restaurant that "made people smile when they saw it," she noted.

"Pollo Feliz to me means 'Chicken Happy,'" she said. "The name itself makes me smile and laugh, so I and my husband went with Pollo Feliz."

Joey has been instrumental in getting the restaurant up and running -- though one of the ways he helps isn't too bad of a gig, considering it involves him eating Olivia's delicious food.

"I have helped out by telling her that her food is amazing when she cooks at home," he said.

More than that, however, he along with some friends and family have completely turned a block building into a "very nice, big commercial kitchen that will prove a lot of great food to everyone that comes in and eats at Pollo Feliz," he said.

Plus, it's an endgame plan for Joey, to transition out of his current service to the community into something safety and tastier.

"I still have a few more years to go in my law enforcement career, but I will be in the restaurant every minute that I can to help out," he said.

There are plenty of chicken options on the menu. The "Pollo Feliz" itself is grilled chicken with cheese dip and rice. There's "Pollo California" with veggies on a bed of rice, "Pollo Loco" with rice and a special sauce, and "Pollo a la Jamaica," with mushrooms, onions, and pineapple. Other menu items include Mexican restaurant favorites, like chimichangas, tacos, flautas, fajitas, and taco salads, as well as whole and half-chickens and shrimp dishes.

But some of the menu items have to be experienced to be explained, said Olivia.

"We have green spaghetti on our menu that is amazing but I can't tell you how I prepare it, you just have to come and try it out for yourself," she said. "We also do authentic Mexican charbroiled chicken on the grill covered with a special sauce I made up myself. I can't tell you the recipe on that either, you just have to come taste it for yourself."

There may be other places in Somerset to get chicken, but only one restaurant that does it the way Pollo Feliz does it -- as happy as one's own home.

"We have some many people tell us they felt like they were eating at their own house, that it didn't seem like they were in a restaurant," said Olivia. "Everyone so far has told us that the food is so delicious."