Congressman Hal Rogers, left, speaks at the dedication ceremony of the SKYHope Recovery Center while Governor Matt Bevin looks on. A number of elected leaders and SKYHope officials offered their support for the newly opened women's addiction recovery center. 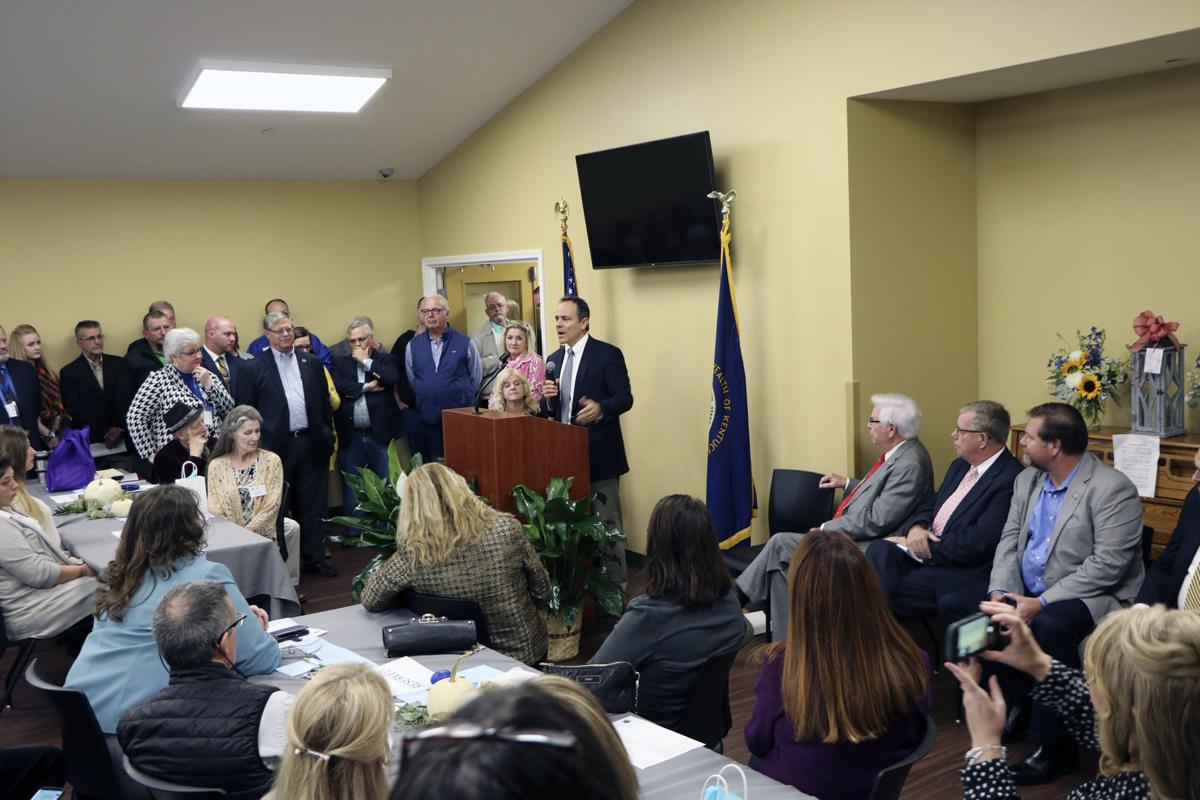 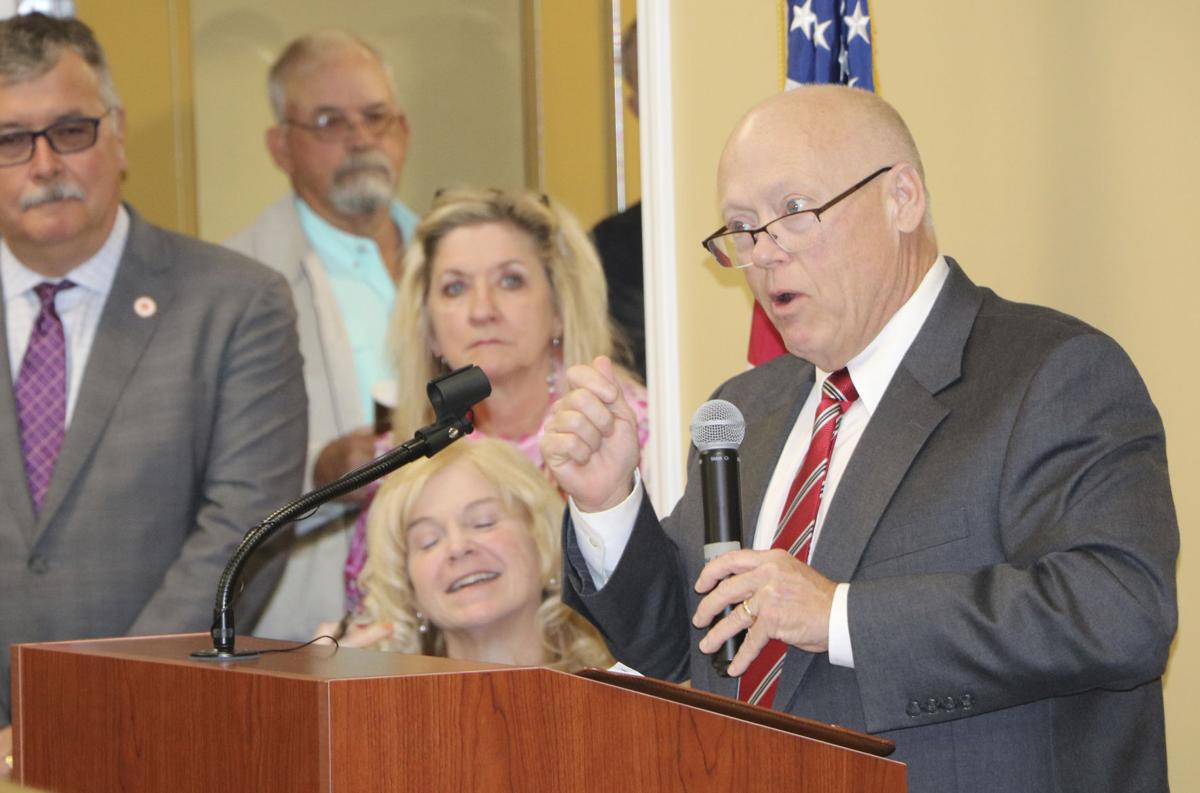 Circuit Judge David Tapp asked how many lives could have been saved if a center like SKYHope had existed a decade before during the dedication of the SKYHope Recovery Center in Somerset.

Congressman Hal Rogers, left, speaks at the dedication ceremony of the SKYHope Recovery Center while Governor Matt Bevin looks on. A number of elected leaders and SKYHope officials offered their support for the newly opened women's addiction recovery center.

Circuit Judge David Tapp asked how many lives could have been saved if a center like SKYHope had existed a decade before during the dedication of the SKYHope Recovery Center in Somerset.

Rogers joined a plethora of officials and elected leaders in the dedication and ribbon cutting of the SKYHope Recovery Program for Women, located on Union Street in Somerset.

The addiction recovery center has been accepting residents since July 23, and currently has 51 of its 100 beds filled.

Rogers congratulated the center and the many supporters for helping to give hope to women around the state looking to beat their drug or alcohol addiction.

"This is where you greet women with tears streaming down their faces and where you hold tight their children and family members who are lost in despair," Rogers said. "Hope is an appropriate name. SKYHope is even more appropriate. You're aiming for the sky, and you've got hope along the way."

Rogers, along with others, pointed towards the late Don Ball, who passed away in March, and his wife Mira, who was in attendance, as inspirations for creating centers like SKYHope across the state.

Don Ball is credited with the creation of the first HOPE center as well as the Recovery Kentucky program, which Rogers said reaches 4,000 Kentucky residents each year.

"This center is testament to the passion that our friend, the late Don Ball, had for expanding access to treatment and recovery for all people in Kentucky," he said.

SKYHope is the 14th center opened within the state.

"This center will allow a great number of people hope and a reentry into their former great way of life," Rogers said.

Governor Matt Bevin was also on hand to celebrate SKYHope's opening, using the state's "United We Stand, Divided We Fall" motto as inspiration for his speech.

"If we stay united, and if we are together marching through this step by step, we're going to accomplish anything and everything we want to. But if we don't stay united, we will fall."

Directing his comments to the women who reside in the center, Bevin added: "The potential is great. The upside is great. The possibility of recovery and the hope for the future is great. It is possible."

While the celebration mainly focused on the positive aspects of opening the center, Pulaski Circuit Judge David Tapp reminded many of how difficult the journey to get here was, and how more than a decade ago similar efforts were blocked by NAMBYs - "not in my backyard," people who were worried about how a recovery center in Somerset would negatively impact the town.

Tapp said he wondered about how many lives would have been saved if the center had been brought about earlier.

"It is certainly easy to look back and think about what might have been if we had been able to have this facility a long time ago...I also know that looking back solves absolutely nothing. We must always look forward."

Instead, Tapp encouraged the Pulaski community to reclaim the concept of NAMBY.

"I'm going to ask you to adopt that vow, that promise, that slogan that we confronted a decade and a half ago. I want you to proclaim that we will not, as a Christian community, turn a blind eye to the suffering of our neighbors, our own children, our brothers and sisters, and our parents. Not in my back yard.

"...We will no longer demand of our police… our first responders, our elected and appointed leaders to do something, anything about the scourge of substance abuse while denying to them the very tools that are necessary to confront and reduce this overwhelming problem. Not in my backyard.

Pulaski County Judge Executive Steve Kelley related a story about losing a friend to addiction after Kelley's own efforts to try to help him. He ended up preaching at the friend's funeral.

"It was the hardest thing I ever had to do, was to know I was that close to helping somebody and he couldn't make it," Kelley said.

"I'm so thankful there's a place here that's going to give hope to people who are trying to make it and are going to make it…. If we can just make a difference in one life, it'd be worth it."

Somerset Mayor Eddie Girdle called the center something that the entire community needs.

"This is a fantastic project, one that I as a mayor am extremely proud of. We need to support it, to uphold all of the residents here and all the programs," he said.

Sandra Dalton, 77, of Somerset, KY, passed away Saturday, August 8, 2020 at Lake Cumberland Regional Hospital. Funeral services are pending at this time and will be announced later. Lake Cumberland Funeral Home is entrusted with the arrangements.