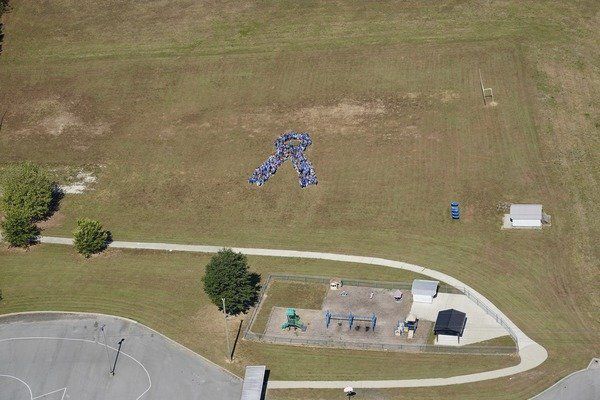 Shopville Elementary recently celebrated its National Blue Ribbon School status with an aerial shot of the students all dressed in blue and in ribbon formation. 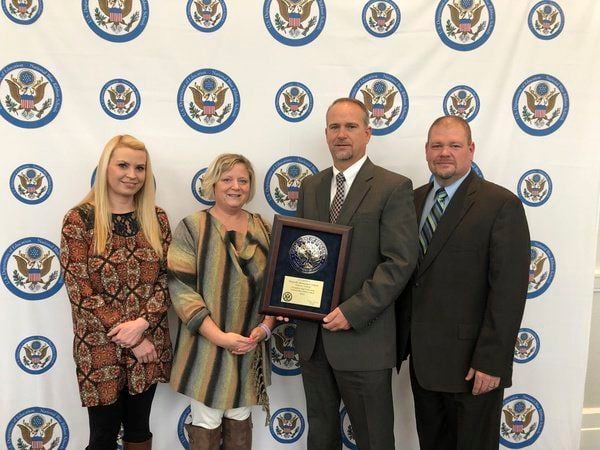 Shopville Elementary recently celebrated its National Blue Ribbon School status with an aerial shot of the students all dressed in blue and in ribbon formation.

A team representing Shopville Elementary traveled to Washington, D.C., earlier this month to celebrate their selection as one of 362 National Blue Ribbon Schools for 2019.

"It's just amazing to know that a small rural school like Shopville Elementary could achieve that status at a national level," Richardson said Tuesday. "They were in the company of a lot of private schools, charter schools, so just to be included in that same group is a great honor."

The ceremony was live-streamed so that faculty and students back home could watch. Both the superintendent and Mayfield, who was principal of the elementary during the nomination process, remarked on how some representatives danced across the stage or did cartwheels.

"We didn't do that," Mayfield laughed, "but we were just as happy."

Shopville is one of only nine schools across Kentucky to receive the distinction this year. The school was recognized as an Exemplary High Performing School, which means they are among the highest performing schools as measured by state assessments or nationally recognized tests. Another category for which schools may be identified is Exemplary Achievement Gap Closing Schools.

"It was very exciting for everyone that was there," Richardson said of the ceremony. "I think everybody realized that they were amongst the elite in the nation."

Mayfield added that of the nine Kentucky schools, only five were public schools.

This year marks the 37th year that the National Blue Ribbon Schools Program has recognized over 9,000 schools across the country. Public and non-public schools are eligible for the award and may be nominated once within five years.

Hard work and an ongoing dedication to academic excellence are paying off for Pulaski County Schools. Within at least the last five years, the district has seen Shopville and Oak Hill elementaries be selection for the National Blue Ribbon School honor while Nancy Elementary has been nominated for the award.

After being nominated for the honor by the state, school administrators completed a lengthy application for the national award.

"Basically you put in writing everything that you're doing at the school," Mayfield said, "from interventions all the way to our master schedule."

Shopville Elementary received word of their selection as a National Blue Ribbon School at the end of September. Mayfield called attending the awards ceremony a humbling experience.

"It was very humbling to sit there in that room with all those wonderful schools and wonderful leaders, and to realize Shopville is a part of that," he said. "It's a part of that family now…It gave me a real since of pride in that community because education is important to the Shopville community. The support is second to none as far as from the parents and the community itself."

Dick agreed that much of Shopville's success is owing to the tight-knit community.

"This accomplishment recognizes the hard work and commitment of our students, staff, families, and community members," she stated. "Being a close knit, rural community school is what I believe propelled us towards this achievement. Our family-like culture has helped us to encourage one another not only in academics but also socially and emotionally. Our staff and students attribute our achievements to the 'whole atmosphere' rather than any one specific aspect of the school. Our plan moving forward is to continue with the tradition of making sure that students academic, social, and emotional needs are met in order for each child to succeed to his or her highest potential."

"I'm very proud of the students and staff at Shopville," Supt. Richardson added. "I'm also proud for the parents and that community because it's about everyone working together…It takes everyone to make something like this happen and reach those kind of goals."