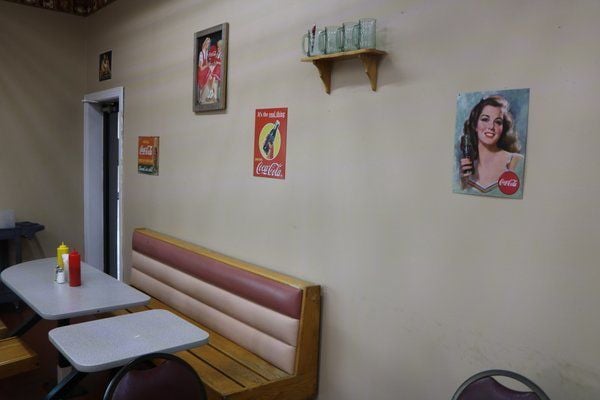 The walls of the Sock Hop Diner are decorated with vintage ads and memorabilia. 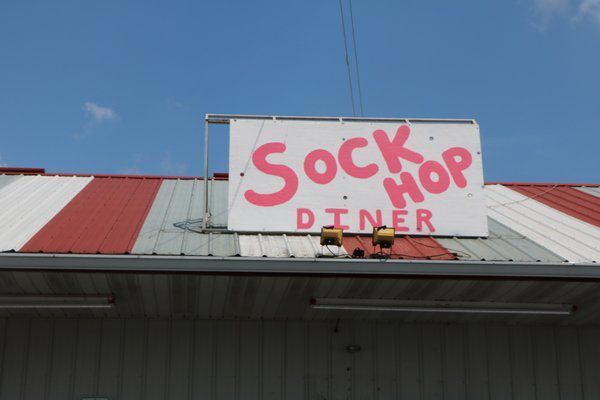 Located in the old Tri-County Cafe space attached to the Tri-County Flea Market along South U.S. 27, the Sock Hop Diner has been open since late July. 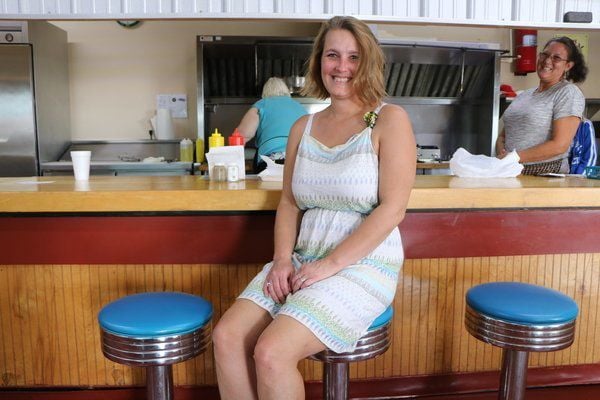 Dawn Dowden owns and operates the Sock Hop Diner along with husband Kenneth. They are first-time restaurant owners, but have already found a place in the southern Pulaski community with a '50s-style establishment. 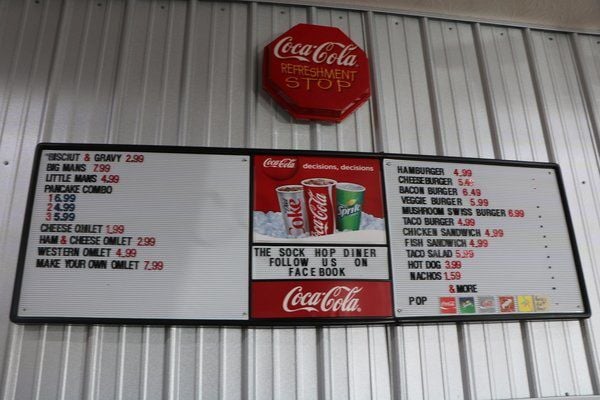 The counter menu of the Sock Hop Diner offers a variety of breakfast and lunchtime-type options.

The walls of the Sock Hop Diner are decorated with vintage ads and memorabilia.

Located in the old Tri-County Cafe space attached to the Tri-County Flea Market along South U.S. 27, the Sock Hop Diner has been open since late July.

Dawn Dowden owns and operates the Sock Hop Diner along with husband Kenneth. They are first-time restaurant owners, but have already found a place in the southern Pulaski community with a '50s-style establishment.

The counter menu of the Sock Hop Diner offers a variety of breakfast and lunchtime-type options.

Let's all go to the Sock Hop.

For many folks, that's a phrase that hasn't been uttered for about 60 years or so. For others, they might be wondering, "What's a sock hop?"

(If you're wondering, it's a dance event for teenagers that was popular back in the 1950s.)

The restaurant is in the space of the old Tri-County Cafe, which was connected to the Tri-County Flea Market along South U.S. 27. That restaurant just recently closed however, and quickly in came Dawn Dowden and husband Kenneth to start something new there, opening on July 19.

The former owner "was one of my husband's good friends," said Dawn Dowden. "He was just tired and wanted to retire. He's a good man. He's helped my husband and I get this place up and showed us what we need to do."

Valuable input indeed. Dowden said that they're "first-time restaurant owners," but it's a project that's a labor of love.

"I've just been a college student, I've been a homebody," she said. "It's taken me out of my comfort zone, and I love it.

"I just wanted something to call mine, and that we could share with people," she added.

The "sharing" is what matters more to Dowden than the "mine" part. She said her goal was not just to own a restaurant but to help promote other businesses in the area, to nurture a sense of community.

"I promote (other places) on Facebook like crazy," she said. "I try to promote each other when people come in. I'll say, 'Go to the flea market and check it out.' 'Go check out Good Samaritan (thrift store).' I try to get everybody to check out everything while we're there."

The atmosphere at the Sock Hop Diner certainly evokes the spirit of the '50s, with vintage Coke ads on the walls and the lunch counter feel. The prices aren't that far off, comparatively speaking -- it's important to Dowden to keep them low.

"Our highest (priced) meal is $7.99, and that's with a drink and sides on it," said Dowden. "I'm trying to make it affordable for people -- I'm trying to attract tourists, and trying to attract people in Somerset as well. I know when I go out to eat, I don't like to pay $10 for a meal. I'm cheap, I'm not gonna lie."

The food is what one would expect to find in such a diner -- the great American standards. Sandwiches include a BLT, hot hame and cheese, club, and turkey, while burgers range from the classic cheeseburger to options like a taco burger, mushroom Swiss, and even a veggie burger. There are also salads, chicken sandwiches, fish sandwiches, and hot dogs.

And then there's a wide array of breakfast food combos, with biscuits and gravy, pancakes, and omelets. If you're feeling particularly hearty, try the "Big Man's Breakfast," which comes with two eggs, two pieces of bacon, sausage or ham, hashbrowns, and biscuits and gravy, or if that's not for you, there's the "Little Man's Breakfast," which has two eggs, toasr, hasbrowns, and the choice of bacon, sausage or ham.

There are also desserts, like root beer floats and hot fudge sundaes, to finish off a filling and lightly-priced dining experience.

"If someone wants something that's not on the menu and we have it, we'll make it for them," said Dowden. "... We do have specials every now and then."

Even though it hasn't been open long, the Sock Hop Diner has already gotten off to a rockin'-and-rollin' start. Dowden recalled a family from new York that dropped in last week and "loved the food," went to visit the flea market, and then came back for more.

"If (the flea market( is really busy, we're busy," she said. "Sundays, we get the church crowd. Some of the tourists noticed us last weekend because we got the sign up."

So if you're headed along South U.S. 27, keep an eye on the east side of the road for the pink letters of the Sock Hop Diner -- and take in the latest restaurant carrying on the local favorite aesthetic of '50s nostalgia, joining gone-by restaurants like Rockin' Robin and Cruiser's before it. Certainly, Dowden embraces the sense of community that people who lived in the '50s like to reflect upon fondly.

David Pitman, age 62, of Somerset, KY, passed away on Thursday, April 2, 2020 at Lake Cumberland Regional Hospital. Services are pending at this time. Lake Cumberland Funeral Home is entrusted with the arrangements for David Pitman.

Virginia Lee Perry, age 77 years and 27 days, passed away Monday, March 30, 2020 at the Cumberland Nursing and Rehab Center in Somerset, Kentucky and was placed in the care of Hickman-Strunk Funeral Home. Graveside funeral services were held Thursday, April 2, 2020 at 12:00 pm at the Wright …