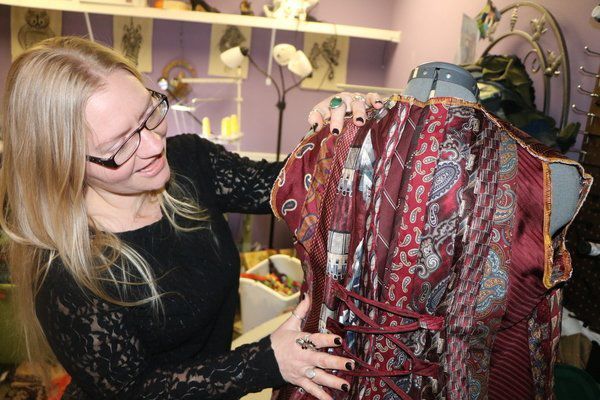 Jade Ellis constructs an outfit made entirely out of neckties as part of her offerings for A Bazaar Universe. 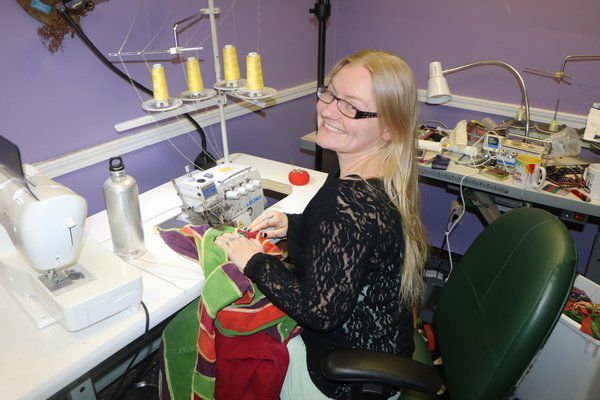 Jade Ellis works in her space at the Flashback Theater Co. Artists' Suites.

Jade Ellis constructs an outfit made entirely out of neckties as part of her offerings for A Bazaar Universe.

Jade Ellis works in her space at the Flashback Theater Co. Artists' Suites.

Some artists work in paints, or clay. Some work in music and sounds, some on the printed page or stage.

That's the idea behind A Bazaar Universe, an entrepreneurial endeavor Ellis shares with close friend and business partner Delia Williams. Though A Bazaar Universe is a show that the two take on the road, going from venue to venue on the music festival circuit, Ellis is based right here in Somerset, next door to her native community but a place where an artist like Ellis has found she can grow and thrive.

"I'm an abstract fabric artist," said Ellis. "I'm not a tailor. I don't follow patterns well. I make what I'm inspired to make."

What she does is make new clothes out of old ones. Ellis and Williams approach their business from an ecological mindset, hitting up thrift shops and other sources to find textiles which they then snip, swap, and combine to make an original creation, not unlike how a DJ might take parts of different songs to create a new radio hit.

"Everything that we do is made from recycled material," she said. "They're all from fabrics we've found and cleaned and made into new things. Lately, I'm focusing more into vintage clothes, doing repairs on them and getting them read for new homes.

"We are aware of the impact of the fast fashion industry on our planet," she continued. "It's one of the biggest polluters on the planet. We all want to buy new clothes and try on things; upcycling and reclaiming clothes is a way to do that without have the harsh effect on the environment."

Even the fabric in the tents Ellis sets up at shows, the hangers, and other necessities come from secondhand sources -- old department store, Facebook market place, things people already had and didn't need anymore.

Ellis is originally from McCreary County, but came to Somerset go to Somerset Community College out of high school, around 2003. She moved away for a year, and came back for a couple of years, and then hit then road again -- seemingly for good.

"I started really traveling; I'd just stop and live somewhere for a while," said Ellis.

On one of her stops in Hawaii, she met Williams, and the two quickly bonded over their similar perspectives and plotted ways to travel together. A year later, in 2011, they were going to music festivals and volunteering, and would stop at secondhand stores along the way, making great finds that they would repair and put their own touches on. The more shows they went to, the more their work got noticed.

"People kept wanting to buy the things we were wearing," said Ellis. "We also had a costume tent set up at our camp. We said anyone can play dress-up with us, but you have to bring the clothes back at the end of the event. People were wanting to buy the clothes. There became a market for it."

The two decided to try becoming vendors for their work, and would "just see what happens." So every show, Ellis and Williams would try to make their stuff a little better, make the booth better, and make a "more inclusive experience for everyone." They set about making clothes people could buy and still do so eight years later -- jackets, hoodies, shirts, armwarmers. Most all of them colorful with a Bohemian vibe and definitely one-of-a-kind.

That inclusive experience extends to sizes. Ellis said it's important to her to have something for every body shape.

"The fashion industry today is so focused on super-skinny bodies; a women's size 14 is not plus-sized, it's average-sized," she said. "I want to change that in society's consciousness, to make it okay that a size 14 is more average. It's important that I make things for more voluptuous people."

Ellis has been making her own kinds of pieces for much longer than A Bazaar Universe has been around. Her grandmother bought Ellis her first sewing machine when she was 16, a Singer. She still has it, though uses it as a back-up for more modern equipment.

"In the beginning, I was just making clothes for myself," she said, "taking two things I liked and putting them together to make things I really liked."

However, Ellis finds herself inspired by others also, including the fellow unconventional designer Katwise.

"She's a fabric artist who started doing a specific style of pixie dress in the '90s," said Ellis. "A lot of my things are similar to her style.

"She's super encouraging of people who want to do things in her style because her stuff sells. It sells immediately when she posts it online," added Ellis of Katwise. "She encourages artists to (do similar things and) give her credit for inspiration only. Once I started doing my own take on her aesthetic, it flowed very naturally."

Ultimately, Ellis sees what she makes as artwork that you wear -- and that turns you into a work of art yourself.

"When you wear something you think is beautiful, you're more likely to feel beautiful while wearing it," she said. "I want everyone to feel how beautiful they are."

As an artist -- one who has even receeved a grant from the Kentucky Foundation for Women for her work -- Ellis has found a home in Somerset after coming back a few years ago to take part in one more stage production (that has turned into several) with the Somerset Community College Drama program. Indeed, she's found a place where her restless spirit finally fits in.

"The growing arts scene (kept me here)," she said. "It just seemed like Somerset was right in the middle of an artistic renaissance of sorts, between Flashback Theater Co. and McNeil Music Center and the Shine House. There are a lot of opportunities here that didn't exist before."