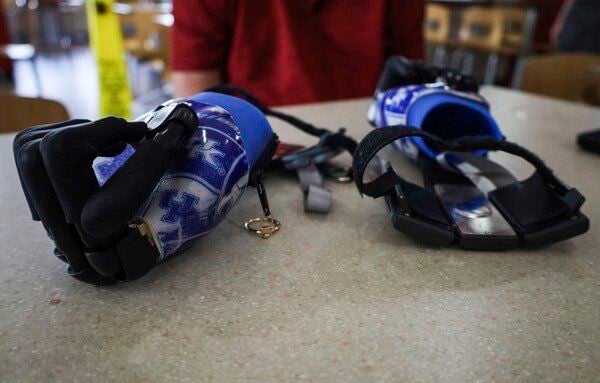 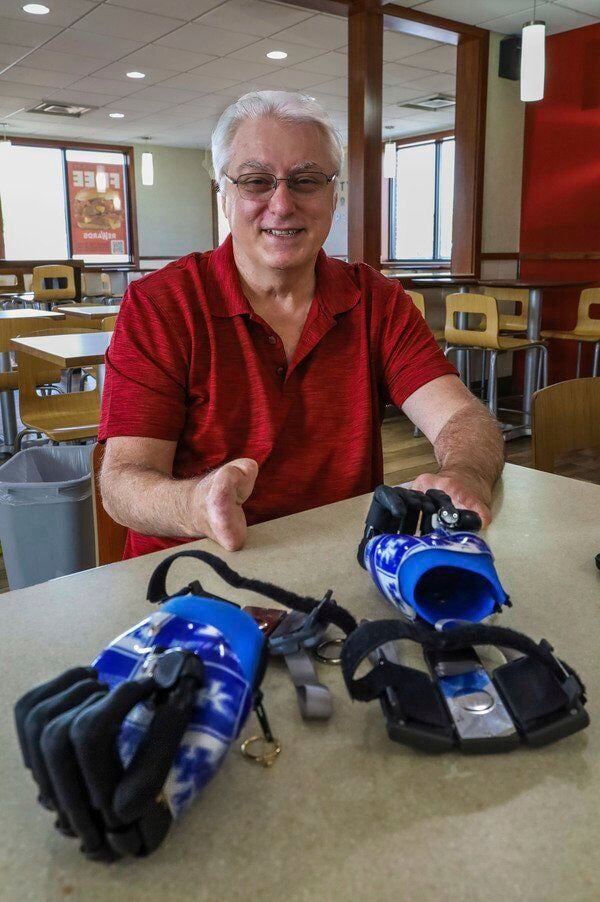 Gary Abbott shows off his new i-Digits Access prosthetics on May 25, 2021 in Monticello, Ky.

Gary Abbott shows off his new i-Digits Access prosthetics on May 25, 2021 in Monticello, Ky.

Lake Cumberland Regional Hospital's first admitted COVID-19 patient has continued to fight in his recovery through faith and determination.

Gary Abbott, a former Wayne County coach and superintendent, has been known in his community as "The Survivor" after he miraculously fought for his life for 115 days in the LCRH Intensive Care Unit last year, where he lost all his fingers and toes to infection.

"My whole life I've been determined to fight. If there's something in my life I need to fight for, I fight," said Abbott. "It's just like coaching, I'm not going to let anything win. So, when I had to figure something out, I stayed on it until I did."

Now his loved ones have recently given him a new title, "The Bionic Man," as Abbott got his new myoelectric partial hand prosthetics known as "i-Digits Access" from The Össer Academy last month.

"I pretty much got down just about everything I could without them," said Abbott. "But now with them I want to be able to do all of that plus more, like working a weed eater and little chores where you have to use fingers to start things. I still got to do things with my grandkids. I want to do baseball and basketball with them."

However, the moments since Abbott's initial diagnoses on March 18, 2020 have been a culmination of hardships and victories, which has made him an inspiration for his community.

"I remember going down the hallway in a wheelchair to the ICU unit and it was abandoned. I'm sure the hospital was getting ready for this pandemic to start," said Abbott. "They put me in the first room where the nurses could see me, and then they put red tape in a big X over the window. I thought, 'this isn't good at all.'"

The next day Abbott went on a ventilator, which he would need for 27 days, where he coded five times and almost lost his life. He later had to lose all his fingers and toes during his struggle with the coronavirus.

"The day that this happened in the hospital when I woke up and I saw that I didn't have any fingers or any toes, that was a bad, bad day. I started crying and questioning God and asking Him why am I still here when I can't even do anything," said Abbott. "Then Jesus said, 'It'll be okay,' and God said, 'Just be patient.' From that moment on nothing has distracted me from doing something and making it happen."

According to Abbott, through his road to recovery the nurses at the LCRH also became his family and support system.

"Anytime I saw him in the hall with his therapist walking, working in the gym or exercising I tried to encourage him in every way I could. I watched him flourish a bit more each day," said Morgan Russell Hughes, who worked in the LCRH rehab and special care unit. "It brings tears to my eyes thinking of what he came to us as to what he is now. He called us his angels when he visited us a few weeks ago, but I can assure you that he is the inspiration."

After leaving the hospital on July 10, 2020, his daughter's birthday, Abbott taught himself to work through this next chapter of his life starting with only Velcro wraps and boots for his hands and feet.

"The rehab I did as soon as I got out of the hospital in July for about a month. Then you run out of time when the insurance won't pay for anything any longer, so you don't have any more sessions," said Abbott. "But I never gave up. Every day right now I'm still adjusting and learning."

Abbott's determination has drove him to accomplish anything he has set his mind to.

"Whenever you say 'can't' that's all I need to hear. I'm going to do it no matter if it takes me the rest of the day to do it," said Abbott. "They would say you can't drive without fingers, and I would tell them I will drive without fingers. I put my truck in gear and got it going, got my hands where they needed to go, and I just took off."

He is now learning how to use his new prosthetic's technology which includes independently motorized fingers and various pre-set grip options.

"The day I went in to the Össer Academy they told me not to get frustrated, and I told them I'm not going to get frustrated, I'm gonna learn how to do it. Every day that I would do something they would say no one has ever done that before that quickly," said Abbott. "I'm still learning to use them, but my grandson likes to think that I've got Captain America or Iron Man stuff. He thinks they're pretty cool."

Abbott has continued to use his experiences as a testimony that miracles do happen and to never give up.