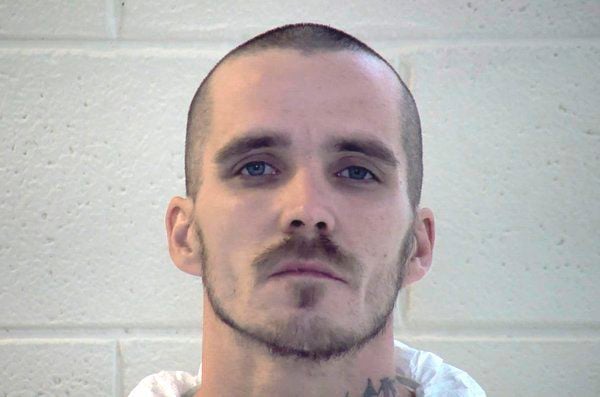 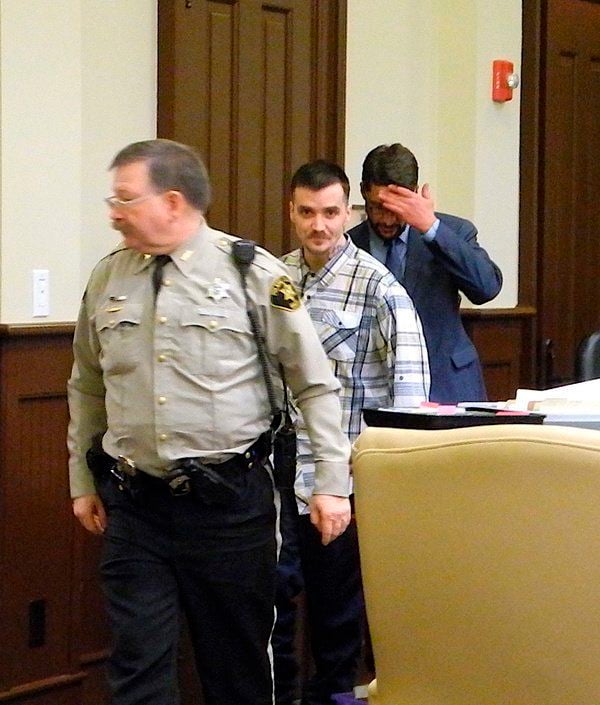 Roy E. "Hoopie" Glover, center, is escorted from the courtroom following the conclusion of the first day of his trial Monday afternoon. Glover is accused of attempted murder, among other charges, after striking Lt. Jon Williams of the Pulaski County Sheriff's Office with a stolen vehicle during the course of a high-speed chase back in September 2018.

Roy E. "Hoopie" Glover, center, is escorted from the courtroom following the conclusion of the first day of his trial Monday afternoon. Glover is accused of attempted murder, among other charges, after striking Lt. Jon Williams of the Pulaski County Sheriff's Office with a stolen vehicle during the course of a high-speed chase back in September 2018.

A Science Hill man accused of trying to kill a Pulaski deputy sheriff was in court Monday for the first day of his trial.

The case revolves around a high-speed pursuit that occurred in northern Pulaski County on September 25, 2018, in which Glover is accused to have been driving a stolen 1996 maroon Toyota Camry when he struck Lieutenant Jon Williams of the Pulaski County Sheriff's Office (PCSO) during the course of the pursuit.

After a morning of jury selection, the trial got underway Monday afternoon with opening statements from Commonwealth's Attorney Eddy Montgomery and defense attorney Ezra Dike.

Montgomery used his opening to give an overview of his case — explaining how the stolen Camry was spotted first by PCSO Sergeant Cary York on US 27 in Eubank. Sgt. York, already on another call involving a juvenile in his cruiser, could not initiate a traffic stop and radioed for assistance before eventually losing sight of the vehicle. Within moments, Science Hill Assistant Police Chief Greg Martin picked up the pursuit at the intersection of Ky. 70 and Ky. 1247 as the Camry headed south back toward US 27. With officers from at least four agencies joining in, the pursuit continued south on US 27 with the Camry at times traveling in the northbound lanes before turning onto to East Frog Hollow Road.

Missing a sharp curve in the country road, the Camry then traveled up a private driveway — going off road through the woods in order to turn around. In the meantime, Lt. Williams and Kentucky State Police Trooper Richie Baxter had positioned their cruisers at the bottom of the driveway to limit the Camry's path of escape and then exited their vehicles. As Glover drove between the cruisers, Lt. Williams could not get out of the way in time and jumped up — striking the windshield but probably saving his own life, Montgomery told the jury. Trp. Baxter had fired six rounds at the vehicle, with one of the bullets hitting the passenger (and Glover's co-defendant, who previously entered into a plea agreement) — Michael Anthony "Bam Bam" Wilson, 33, of Somerset.

Meanwhile the officers temporarily lost the Camry until a caller advised 911 that it had parked by a trailer on Ky. 635. Officers first found the wounded Wilson, covered in blood, in a soybean field before finding Glover hidden in the same field without the shirt he had been wearing.

Montgomery noted that Lt. Williams, as the other officers were, was wearing a uniform and the law enforcement vehicles all had lights and sirens activated — something Glover chose to ignore.

"He attempted to kill Lt. Williams," the prosecutor said, "and Lt. Williams got lucky.…Roy Glover put lives at risk."

In the defense's opening statement, Dike didn't dispute that Glover (and Wilson) put lives at risk but he vehemently denied there was any intent or attempt to kill a member of law enforcement.

Dike described "two idiots" who got high on methamphetamine and went joyriding in a stolen vehicle — until they spotted Sgt. York.

"They got scared and they ran," he said. "They created an enormously risky situation. They put their own lives as well as innocent lives in danger, but they never meant to kill or hurt anyone."

Dike noted that the first time Lt. Williams had excited his cruiser was on US 27 in order to deploy tire-deflation strips on the highway. Had Glover been trying to kill someone, he could have aimed the deputy then. Instead, the driver avoided Williams and the strips altogether. When the Camry was cornered off East Frog Hollow Road, Dike said the Glover and Wilson saw only that the police had "left a narrow gap at the bottom of the driveway." Once they got through it, they felt lucky. It wasn't until the bullets started flying and they saw the cracked windshield that they realized the Camry had struck someone.

The defense attorney described Lt. Williams' injuries as having the wind knocked out of him as well as some lacerations on his legs. Dike told jurors that the lieutenant was even able to continue in the chase, as evidenced by body camera footage from PCSO Captain Troy McLin. Though Lt. Williams may be rightfully angry, he said, that doesn't make Roy Glover an attempted murderer.

"He [Lt. Williams] is the victim of an accident which was entirely unnecessary," Dike concluded, "but at no time was there ever an intent to kill."

Dep. Smith, the last witness of the day, identified Glover as the driver of the Camry. Though he didn't know the defendant personally before the incident, the deputy testified that he recognized Glover after he was taken into custody off Ky. 635.

"The driver looked right at me," Dep. Smith said of the Camry passing and nearly striking his SUV while leaving the driveway. "[Afterward] he wasn't wearing a shirt but I remembered his face."