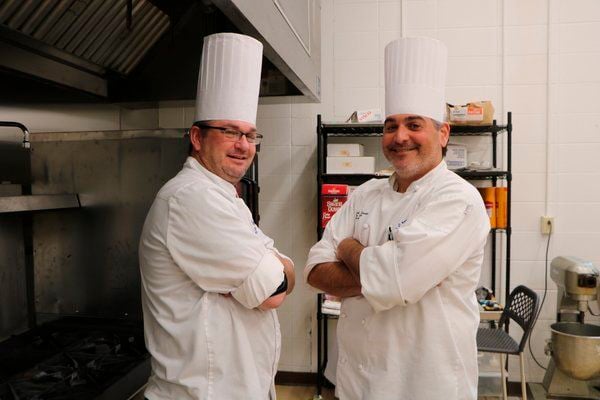 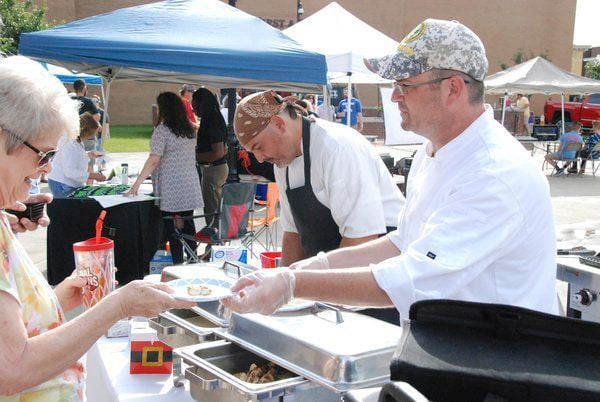 Somerset Culinary Company showed the public what they can do at a past "Sample of Somerset" tasting fundraiser event on the Judicial Center Plaza.

Somerset Culinary Company showed the public what they can do at a past "Sample of Somerset" tasting fundraiser event on the Judicial Center Plaza.

As business partners, Michael Wells and Ed Nazario are a match made in the kitchen.

"We didn't know each other; we got hired independently," said Nazario. "It ended up working out really nicely."

The two were both tabbed as instructors for Somerset Community College's Culinary Arts program. And while they both still teach up-and-coming chefs, they've branched out into the business world as well.

"We had some contacts out at Woodson Bend, they were looking for someone to take over the kitchen for their restaurant," said Wells. "We decided it would fit our schedule.

"It helps keep us fresh with our skills, helps in keeping up with trends in the industry so we're not losing our edge," he added.

Though it's at the resort known for its golfing and lakeside recreation access, Mulligan's is open to the public, mid-April to mid-October. One does have to call and make reservations so that the security gate knows to expect a guest, however.

As for what the Mulligan's menu offers, "we have everything," said Wells. "Burgers, chicken sandwiches, kind of your normal higher-end sandwiches. Some pasta entrees like Alfredo, chicken parmesan, shrimp scampi."

Then there's the steak menu, which this year includes ribeye, strip loin, and filet. Every year, Wells and Nazario switch the menu up a little bit though, with different offerings.

"It keeps it fresh and new for all the clients and customers coming in," said Wells.

The restaurant is open seasonally on Fridays and Saturdays, except in June, July, and August, when they're open Thursdays as well. Reservations can be made at 606-561-5221.

The two men behind Mulligan's and Somerset Culinary Company come from different backgrounds, but both share a love of cooking and boast a combined 40 years-plus of experience in the industry.

"I worked at a lot of country clubs and resorts," he said. "I've done a lot of large-scale catering events.

"As a chef, you have to know a lot of different cuisines," he added. "Our specialty is making people happy."

Wells came to the Bluegrass State taking a job with the Kentucky Department, at Barren River Lake State Resort. He went back to school, got a business management degree, and found himself here in Somerset, where he met Nazario.

Unlike Wells, Nazario is a homegrown product. An alum of Pulaski County High School, Nazario attended Sullivan University in Louisville, and ended up working in Somerset at the Doolin House Bed & Breakfast under fellow Sullivan graduates Chuck and Allison Sobieck. Before that, Nazario worked as a line cook at Portofino in Lexington, sous chef at Serafini in Frankfort, and then opening head chef at Summit in Lexington.

His family moved here from Puerto Rico when he was in his early teen years, and said that Caribbean heritage still influences his cooking.

"The food you grew up with inspires you; at some point, you revert back to those things you learned very early on," he said. "Sometimes not so much in the menus, but we do have the liberty to do specials and things at the restaurant. I'm a big fan of classic French cuisine, we do a lot of specials with that in mine, and we like to add Caribbean to those specials once in a while."

With the catering business of Somerset Culinary Company, Nazario said that he and Wells have "adapted to pretty much everything so we can appease just about every budget."

What they offer is expertise; Nazario said they might cost more than some other caterers but you get their training and experience, and they can do everything form lunch buffets to fine dining meals with $50 plates.

The two started Somerset Culinary Company in 2012 after meeting at SCC. "We got to be friends pretty quickly, professionally and personally," said Nazario.

The two stay busy with Somerset Culinary Company (www.somersetculinarycompany.com) but still continue to teach at the college and pass on their knowledge to other local talents who one day might have restaurants and catering companies of their own.

"We've got large-scale country club business savvy, then can offer more fine dining, independent restaurant experience; we feel like that combination worked out great," said Nazario. "We can relay a lot of experience to the students. ... We find it very satisfying to watch students come in with almost no knowledge and two years later, we see all the knowledge and skills (in them). It's like when you're a chef somewhere and have a sous chef, then they branch out and get get their own chef job. There's a lot of satisfaction as a chef to watch people under us take our teachings and take it to the next level -- (as far as) the chef part of it, but also personally as well."