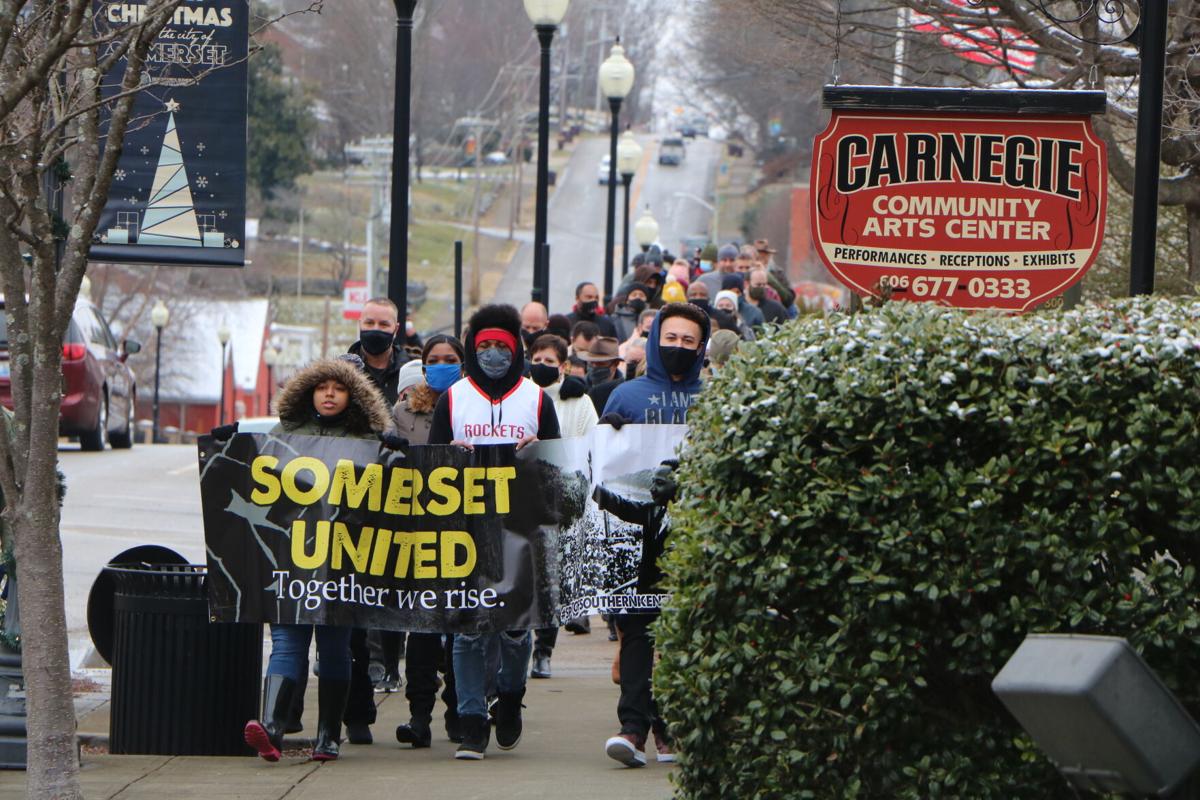 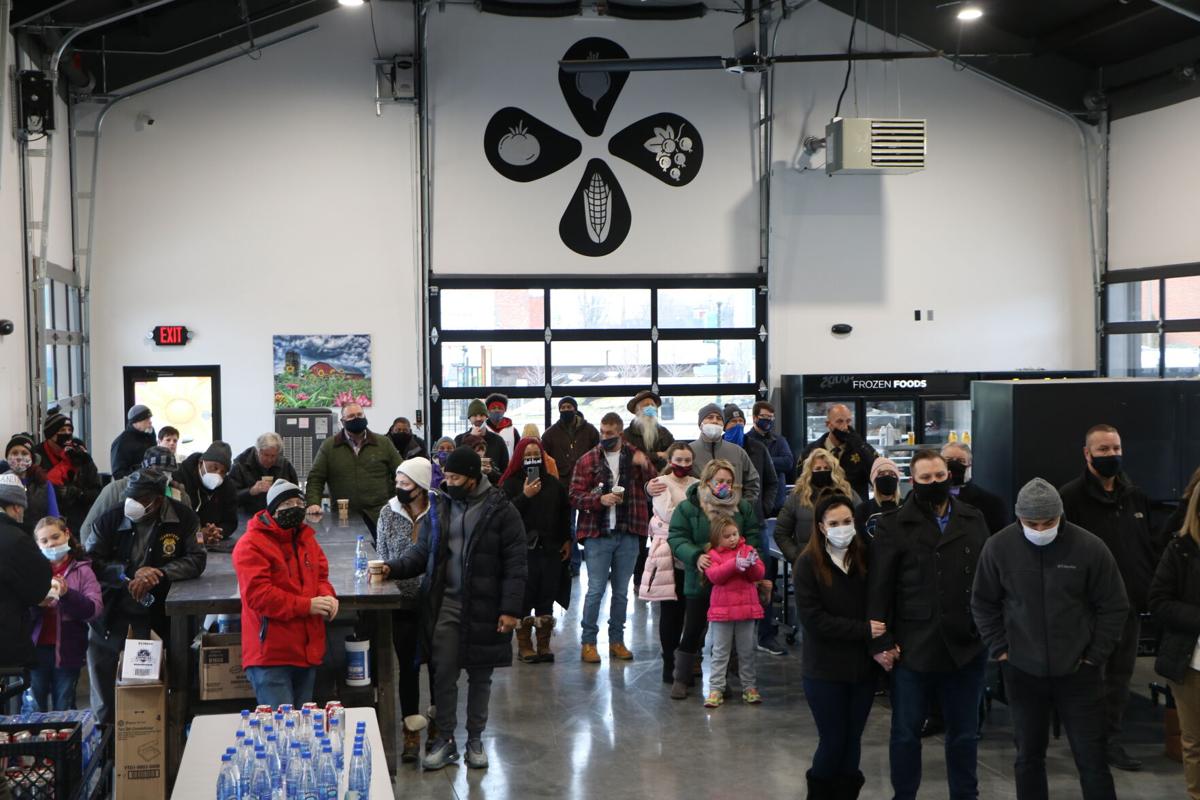 Over 100 people took part in Monday’s MLK Day event, including the march and the gathering for Dr. King’s words at the Citizens National Bank Pavilion, where the Lake Cumberland Farm- ers’ Market is held.

Over 100 people took part in Monday’s MLK Day event, including the march and the gathering for Dr. King’s words at the Citizens National Bank Pavilion, where the Lake Cumberland Farm- ers’ Market is held.

“I am so happy that I didn’t sneeze.”

A well-populated crowd gathered inside the Citizens National Bank Pavilion in downtown Somerset on Monday, bundled up from chilly weather. Over their faces, almost every person wore a face mask with the coronavirus in mind — living in an era where a sneeze can seem a suspicious thing. And as they stood, they listened to the words of Dr. Martin Luther King, Jr. from April of 1968, the famous “I’ve Been to the Mountaintop” speech, in which King recalled battling an illness as a youth where a simple sneeze could have threatened his life, and a letter he received from a young admirer grateful that he did not succumb to a fatal sneeze.

“We’ve got some difficult days ahead,” he continued. “But it really doesn’t matter with me now, because I’ve been to the mountaintop. And I don’t mind.”

The words of King were fitting for more than just a setting where masks were worn to shield one’s sneezes; Monday marked Martin Luther King, Jr. Day, first observed in 1986 — always on the third Monday in January. King, the civil rights activist notable for his actions in the 1950s and ‘60s, non-violent protest campaigns such as the Monthomery Bus Boycott and the March on Washington, was killed only a day after making the speech quoted from above.

King is remembered largely today for his message that individuals should be judged by their inner qualities, not by their skin color, and for promoting a goal of racial equality. Though King’s message rang controversial in his day, Somerset’s annual march is compromised of a diverse mix of community members — of all colors, backgrounds, walks of life. Still, the message shared is that the fight is not over and there is more to be done.

“Everybody kind of hangs out with their own group,” said JaKaye Garth, one of the founders of the Lake Cumberland Diversity Council, which organized Monday’s march. “... (King said) ‘I have a dream that one day we will not be judged by the color of our skin but instead the content of our character. To me, that is racial healing. We’ve come a long way since he said that, but we still have a long way to go.

“I want to challenge everybody to think about (the idea that) just because something isn’t happening to you, it doesn’t mean that it’s not happening to other people in your community,” she added, “to your neighbors, to your friends, (or) other people in this country. And so, I really want people to think about racial healing and what we can do to achieve that dream that Dr. King had.”

Garth, a member of the local hospitality industry, joined with Kathy Perkins Townsend of the City of Somerset, Rikiyah Pryor of the Somerset-Pulaski County Chamber of Commerce, Somerset Community College’s Elaine Wilson, and others, to create the Lake Cumberland Diversity Council. With Somerset Community College not hosting some of the typical MLK Day events this year due to COVID-19 concerns, the Diversity Council stepped in and helped create a week of events, including the Monday march, an online panel today (Tuesday) for National Day of Racial Healing, and a winter clothing drive.

Garth said organizers wanted to create the Lake Cumberland Diversity Council to “embrace the diversity that is already in Somerset,” and that it’s not just about color but all sorts of diversity.

Townsend talked about the panel — which is expected to include  community leaders such as Somerset Mayor Alan Keck and Somerset Police Chief William Hunt, and interviews with people of color in the community — and some of the topics that will be discussed. The discussion will posted online at 2 p.m. today (Tuesday) on the City of Somerset’s Facebook page.

In advance of that, Townsend urged those listening to “go home and think about ... how you, as a part of our community, can make this community better, especially when it comes to race relations.”

The march went from Davis Chapel AME Church around the Fountain Square in downtown Somerset and up East Mt. Vernon Street to the Pavilion, where the Lake Cumberland Farmers’ Market is held. Inside, the speech from Dr. King was heard as those attending shared each other’s company as well as hot chocolate and doughnuts.

More than 100 people took part between the group in the march as well as additional people at the Pavilion for the words shared there.

“I’m really, really happy” that so many came out for the event, said Townsend. “... I believe that’s the most we’ve had in a while.”

Mayor Alan Keck was one of that number. He was pleased to see such a well-represented event in his community.

“I hope Somerset is known for (being) a community that comes together,” said Keck. “I recognize that we still have our challenges here, but I think it’s important that as one of the leaders and servants in the community that I  take part and that I send a message that we do need to continue to heal, we need to continue to move forward together, focus on what we have in common instead of the differences we may perceive, and I think we’re showing that. I think Somerset will be looked upon as a place that takes the lead on even the tough issues.”

Added Somerset Police Chief William Hunt, “I think today is just another good representation of what a great community we have in Somerset. Anywhere you go, there’s going to be some negative, but here there’s so much more positive ... than I think (there is) in most communities. (It’s positive) to see everyone coming together for one cause, for reflection on a great man, Martin Luther King, Jr., today and then also realizing that we do have a ways to go, that we continue to work for human rights, to make sure everyone is created equal, and to (make it) that Somerset is the jewel where everyone wants to live.”