The Georges pose for a photo inside of their living room, which also happens to be the front room of the house and features a beautiful, ornate upright piano given to the family. The area is also where the family usually readies themselves for the day with coffee, devotionals and conversation. 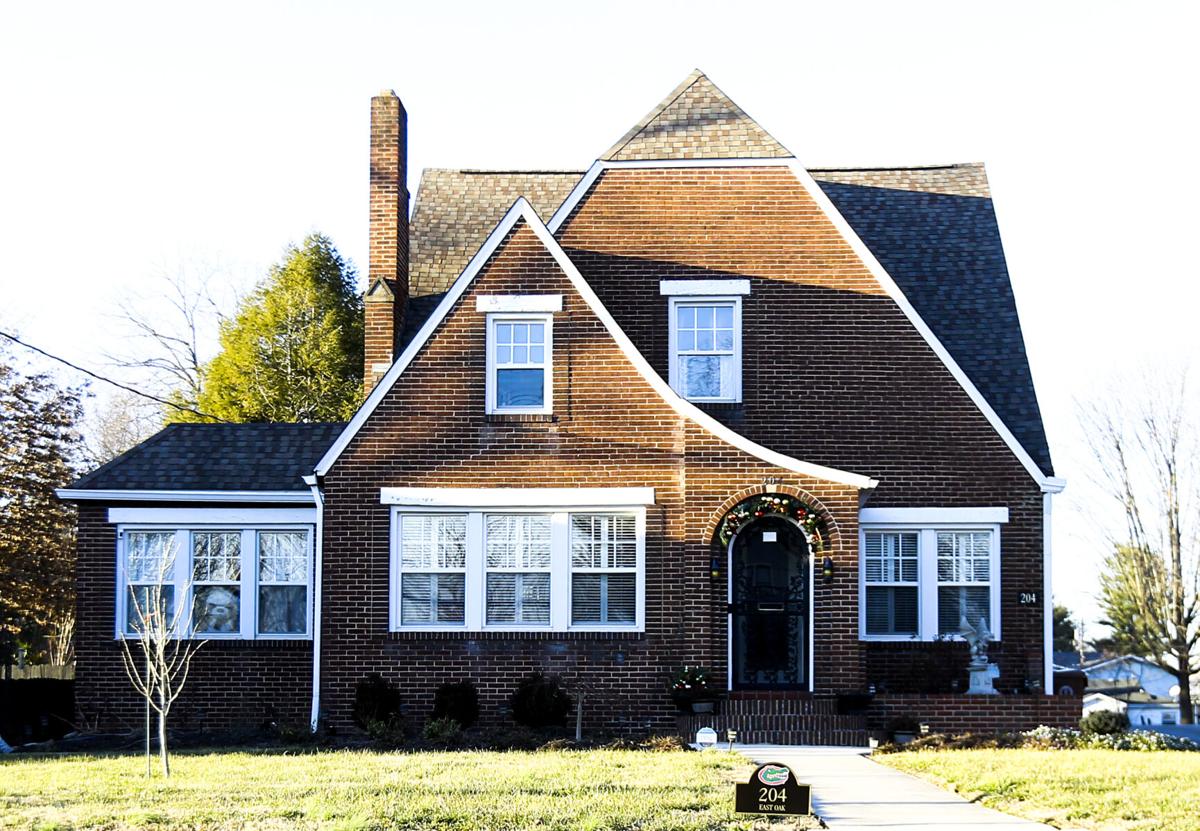 With the house being located in heart of downtown Somerset, festivals and other events are within walking distance for the George’s. 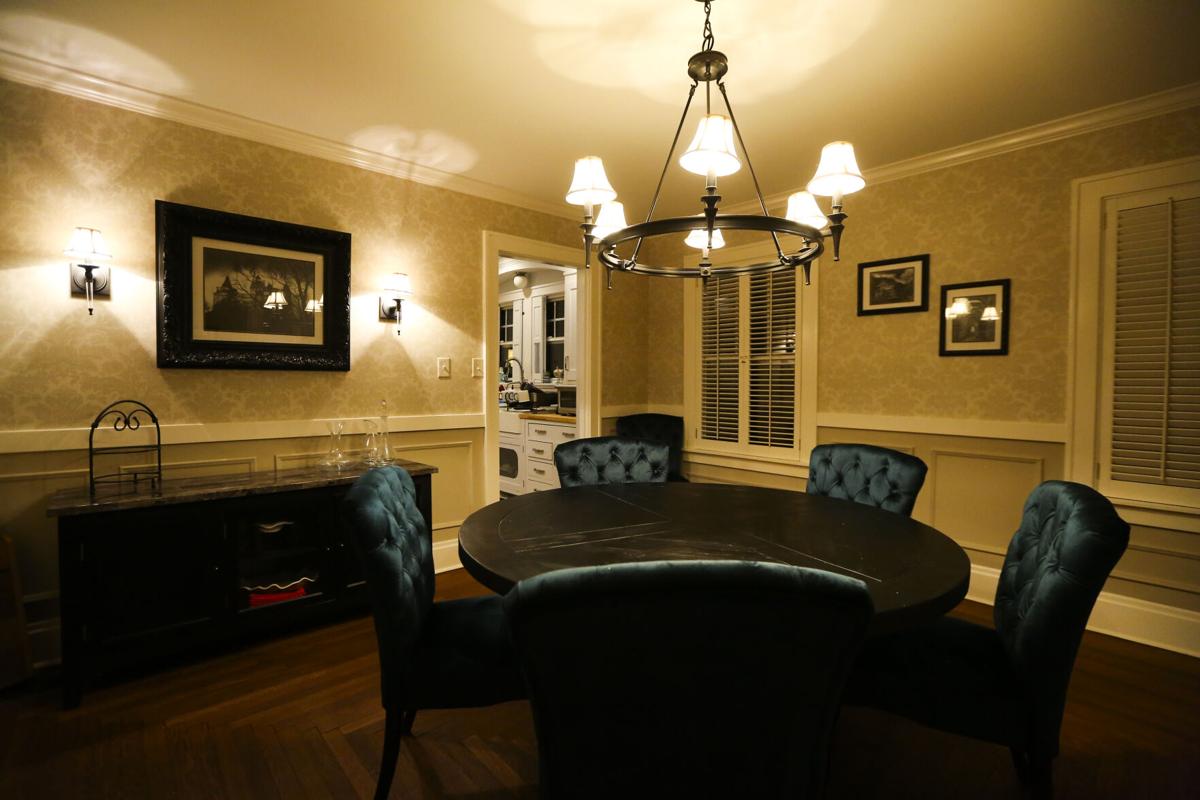 The Georges pose for a photo inside of their living room, which also happens to be the front room of the house and features a beautiful, ornate upright piano given to the family. The area is also where the family usually readies themselves for the day with coffee, devotionals and conversation.

With the house being located in heart of downtown Somerset, festivals and other events are within walking distance for the George’s.

Some of the most beautiful structures in the western world have included gargoyles. Originally used as a sort of decorative drainage spout in the form of a fearsome beastie, gargoyles have graced such iconic locations as the Notre Dame cathedral in Paris and the Natural History Museum in London.

Oh yes, and you can find them at the George residence in downtown Somerset as well.

Any discussion of attractive, unique Somerset homes would be incomplete without considering the house located at 204 East Oak Street. Chris and Tina George, and children Alexandra and Shadrach, moved in there four years ago, and quickly found it the ideal setting for their busy modern lifestyle and eclectic sense of style.

The George family -- previously from Florida -- moved to Somerset just short of 18 years ago, when Chris took a position at Oakwood as a behavior analyst. After his contract with the mental health facility ended, “we loved Somerset so much that we didn’t want to leave,” said Chris. So he started taking consulting jobs, and ultimately started Applied Behavioral Advancements, or ABA, located on College Street in Somerset.

“The whole goal of that was to be able to stay in Somerset and raise our children here,” he said.

Prior to the East Oak Street home, the Georges lived closer to Lake Cumberland. But as Tina noted, “We always loved downtown. ... We liked being by the lake but even a couple years in, we started looking at houses downtown.”

As it turns out, it took a family crisis to finally make that happen. Chris and Tina separated for two years and lived separately. When they decided to try and work things out, they thought maybe a new environment would help make for a fresh start.

“It was perfect,” said Tina. “It was unreal. We took the two households and put them back in, and everything just fit.”

That was exactly four years ago come February. And while they loved their Summit Pointe place -- “It was perfect for homeschooling,” said Tina -- it never quite felt like the ideal home. “This was immediately home,” she said.

The Oak Street house was built in the 1930s. The Georges aren’t totally sure about all of the past owners, but noted that some of them might still be around -- the place is haunted, they said.

That’s okay, though -- the Georges have an affection for the strange and unusual. Even their dogs are named Wednesday and Pugsley, after the children on “The Addams Family.” Faux bats appear to fly on the wall in Chris’ home office. Halloween decorations are lively -- both at the home and at ABA. And then, of course, there are the gargoyles (and even skulls) as the decorative showstopper.

“We’re both old goths” quipped Tina. Of course, that tells enough of a story itself, but their time in Florida exploring other cultures also had a big influence on their aesthetic.

“We spent a lot of time when we were in Gainesville (Florida) running over to St. Augustine,” she added, referencing the nation’s oldest city with a fascinating past. “There on St. George Street, there was a store that carried gargoyles. We’d save up and go over there and buy them.”

Said Chris, “People often look at them as scary things, but truly their history was that they were put on cathedrals, to scare away  evil spirits and stuff. Again, we’ve always liked architecture, and I think one thing about this house that’s unique is the pitch of the roof. We have the arched doorway that’s there, the amber-colored lights (outside). We like having the uniqueness.”

Chris said that many people who come inside find themselves surprised that it seems so much bigger on the inside that it appears from the exterior. It’s just one interesting trick to this classic Somerset home.

“The house has so many neat features to it, from the hardwood floors to the fireplaces,” said Chris, pointing out a double fireplace that goes between two rooms. “The stairwell, we like the arches and things like that. We’ve always liked architecture in pictures; I have an architectural flair.”

The Georges didn’t necessarily decorate the four-bedroom house specially with it in mind -- all the pieces and wall art that they have, they already owned -- but it “came alive in a different way, just because of the uniqueness of the home,” said Chris.

They also credit the family who had it before them, the Thompsons, on doing “an incredible job” fixing the place up. The Georges did do a few other things -- painting a white wall black in the entertainment room, for instance -- but many of the features like lighting fixtures and door handles were already in place.

The front room -- which features a beautiful, ornate upright piano given to the family -- is where the family usually readies themselves for the day with coffee, devotionals and conversation. In the evenings, you’re more likely to find them in the entertainment room, enjoying something on the screen.

Chris said the house has good “curb appeal,” and literally finds the distance from the curb appealing, as the house is set back off the road -- it allows for a front yard and to “watch the cars go by but not necessarily feel like they’re driving into our living room.”

“When we’ve posted pictures on Facebook, we always get comments about it being such a gorgeous house,” said Chris. “I think that it really does have unique styling that is just not seen today. It certainly takes you back, and has more of a historic-type feel to it. You’re coming on 90 years old that it’s been here, but the uniqueness of the outside is almost timeless.”

Maybe best of all is where the house is -- in the middle of a downtown Somerset that’s experiencing a renaissance. Everything from a great view of the downtown parades to a short walk to a growing number of restaurants and businesses makes the heart of Somerset a great place to live.

“I think everyone should live downtown -- though it would be kind of difficult,” joked Chris. “We love being downtown because we like being able to walk to the festivals, and with Charred Oak (Whiskey Grill) and those things opening up, it’s nice to be able to walk downtown.”