Paisley Carrigan shows her excitement at being announced Little Miss Kentucky this past weekend in Lexington. 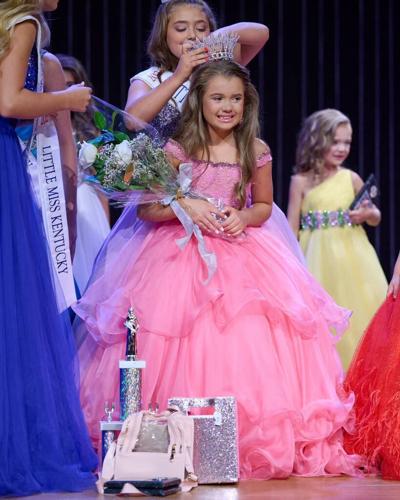 Paisley Carrigan shows her excitement at being announced Little Miss Kentucky this past weekend in Lexington.

Little Paisley Carrigan said she was excited to win Little Miss Kentucky this past weekend. and from the look on her face in photos of the event, that might have been an understatement.

The 8-year-old second grader at Eubank Elementary is no stranger to pageant titles, as she has won both state and national titles before – at just 7 she was crowned Junior Miss U.S. at the AmeriFest Pageant.

This new win is from a competition affiliated with the Miss America organization, her mother Laura Carrigan said, but the Little Miss Kentucky is the highest tier.

The competition took place Saturday and Sunday in Lexington. Paisley’s category is open to girls ages 6 to 8.

Paisley earned her place in the contest by wining Little Miss Capital City in March.

There was a bit of a disagreement between Paisley and her mother on how many years she had participated in this particular pageant – Paisley said she’d done it four years, while Laura said she had done it for three. But however many years it has been, Paisley has a history of placing runner-up each year.

Her talent was to perform a dance to Dolly Parton’s “9 to 5,” Laura said. Paisley’s fun fashion was a Jonathan Kayne custom jumpsuit, and her evening wear was a Sherri Hill gown.

But in Paisley’s eyes, she won because she did well on the interview portion.

In that, she talked about her work helping Hospice of Lake Cumberland through her Paisley’s Hearts for Hospice campaign.

She said she helps because her grandfather was once a hospice patient. “And I just love taking care of people,” she said.

At some point, she was also asked about riding her dirt bike, and Paisley said she talked about the wreck she had early this summer.

While not seriously injured, the wreck did cause some cuts and bruising on her face, mainly because her helmet didn’t stay on, Laura explained.

Paisley said she doesn’t like the strap that goes under her chin, so she didn’t fasten it. She was out playing with her brother and cousin, with each on their own vehicle, when Paisley said she wrecked going down a hill.

The side of her face was scratched up, but it healed fast enough for her to participate in the pageant.

Plus, according to Laura, Paisley got back on the bike almost immediately.