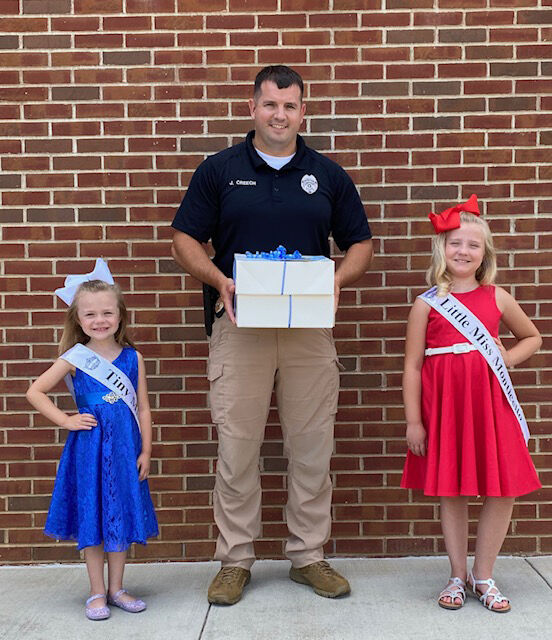 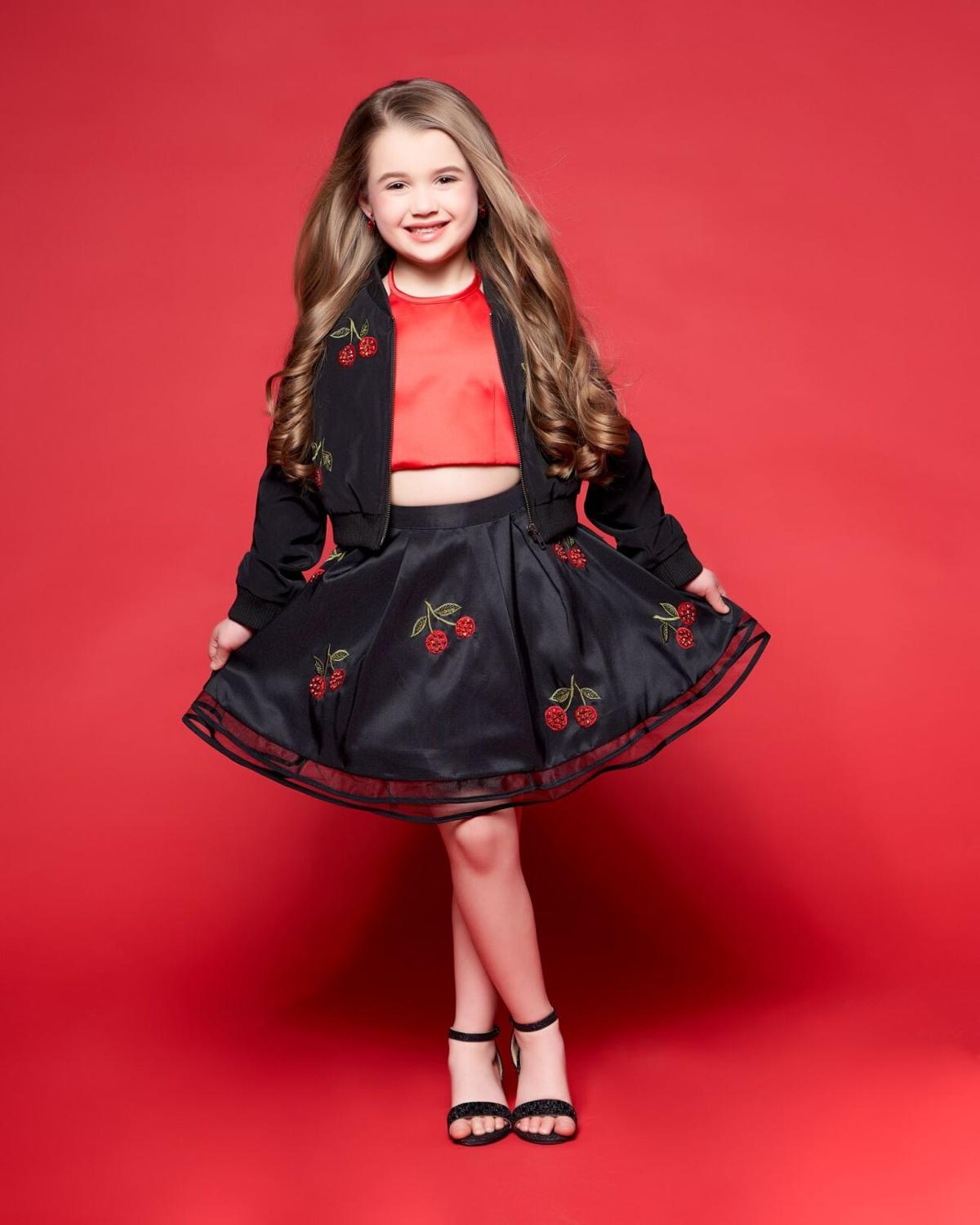 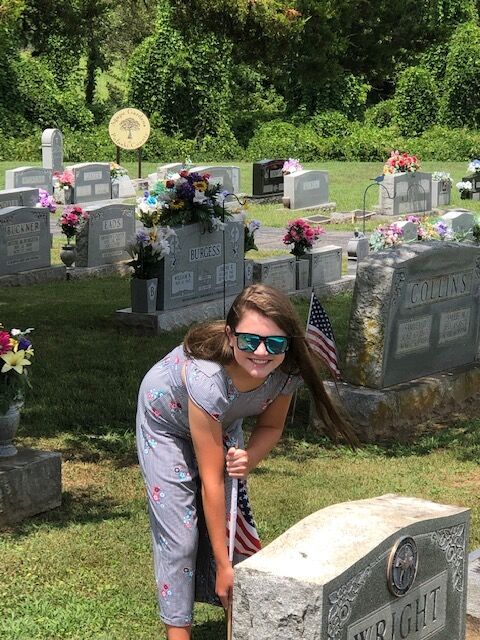 BrynLee Dugger is shown honoring veterans by placing flags on their graves. 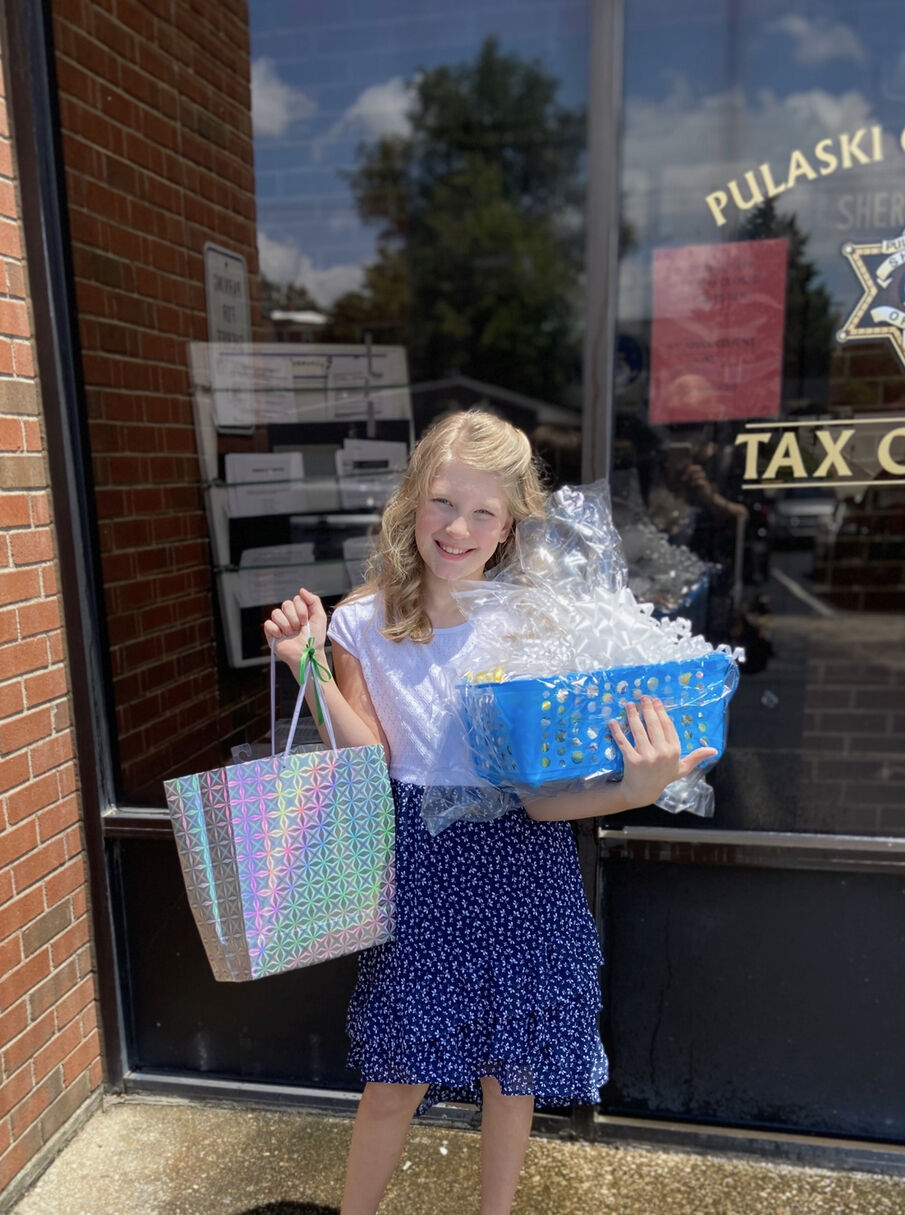 As part of of her community service, Reagan Martin gave treats to the Pulaski County Sheriff’s Office. 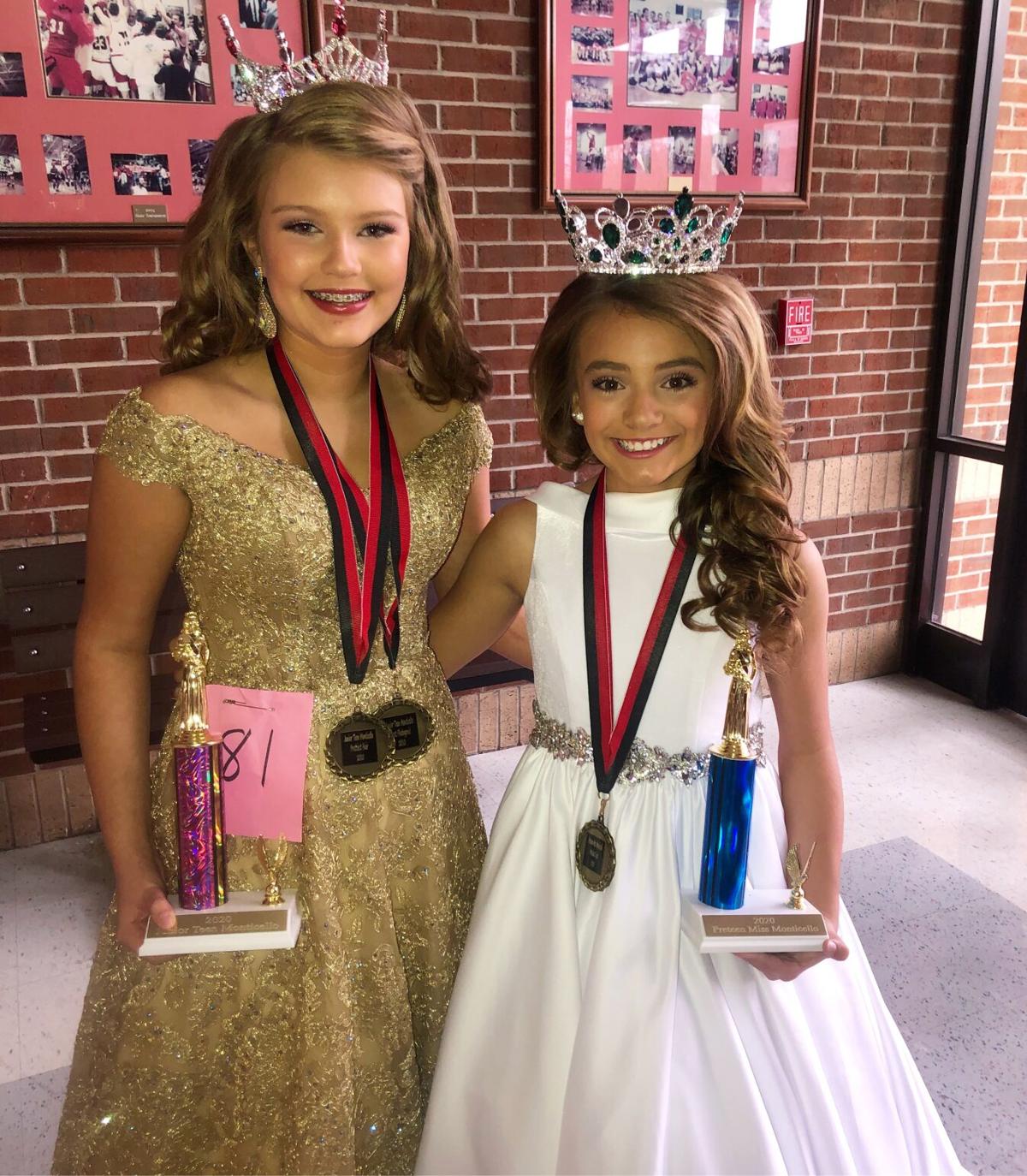 Reilly Smith, 14, and Kriscelyn Randall, 11, will be in this weekend’s pageant in Lexington. Reilly is a freshman at Southwestern High School, and Kriscelyn is a sixth grader at Southern Middle.

BrynLee Dugger is shown honoring veterans by placing flags on their graves.

As part of of her community service, Reagan Martin gave treats to the Pulaski County Sheriff’s Office.

Reilly Smith, 14, and Kriscelyn Randall, 11, will be in this weekend’s pageant in Lexington. Reilly is a freshman at Southwestern High School, and Kriscelyn is a sixth grader at Southern Middle.

There’s excitement in the air, a dusting of beauty in the wind. This weekend, a handful of Pulaski girls will be going up to Lexington to appear in an event they’ve been practicing almost all year for: Little Miss Kentucky.

There are a few changes this year. Like seemingly everything else in 2020, the coronavirus outbreak has caused a little bit of a disruption. In the case of Little Miss, it means the talent portion of the competition has been taken out.

A disappointment, to be sure, but one in which both the youngsters and parents seem to be taking in stride.

“I am very disappointed the talent competition was taken out,” said June Correll, grandparent of two of the competitors and choral director of Northern Middle School. “In fact, I recruited BrynLee Dugger because she is so talented.”

For her part, BrynLee said that she had been looking forward to singing, but that she appreciates everything else she has learned from her experience in preparing for this weekend, such as how to carry herself while on stage.

Her mother, Julena Dugger, said, “She was looking forward to being able to sing in front of her friends, because that’s her comfort. That’s what she loves.”

However, she, too, is looking at the positives, saying that BrynLee’s participation this weekend means getting her name and face out there should she want to continue to participate.

Melissa Martin, mother of pageant entrant Reagan Martin, said that she understood cutting the talent requirement, even though her daughter had been practicing all year. “She hopes to express that next year if she gets to go back,” Melissa said.

Correll explained that this year’s judging breaks down as 30% from the interview, 10% from stage questions, 30% on formal wear, and 30% on their favorite fashion.

Melissa had a story about her daughter’s very first pageant and her outfit of choice in “favorite fashion.” She said Reagan dressed up like JoJo Siwa, the teen singer and dancer.

All the youngest pageant girls came running up to Reagan, thinking she really was JoJo, Melissa said.

Reagan is a 9-year-old fourth grader at Southern Elementary. She earned her place in the Junior Miss spot by being named Little Miss Wayne County.

When asked why she got into pageants, Reagan responded, “I thought it would be good to encourage other little girls to do it if they’re too afraid to do it.”

Don and Frances, owners of Mr. D’s Pizza, was partly the inspiration behind Reagan’s choice of community service project. She delivered pizza and cake to the Somerset Police Department and goodie bags to the Pulaski County Sheriff’s Office.

A grandparent was also the inspiration behind the community service project put together by 6-year-old Paisley Carrigan. When Paisley’s grandfather, Alan McQueary, passed away in December of 2018, Hospice of Lake Cumberland took care of his end-of-life needs.

Because of the excellent care he received, according to Paisley’s mom Laura Carrigan, the girl created “Paisley’s Heart of Hospice,” where she delivers care boxes to hospice patients.

Laura said Paisley has put together 200 care boxes that include socks, snacks, toiletry items and more.

Paisley might be a familiar name to those who follow the pageant scene. Last year she was named Little Miss U.S.

For last year’s Kentucky pageant, she competed in Tiny Miss. This year, she is in the Little Miss category.

Both Paisley and her mom are excited for what the weekend holds. “Paisley has put in a lot of preparation,” Laura said. “She’s practiced!”

That practice comes with her coach, Taylor Wilhoite.

BrynLee Dugger, a 12-year-old student at Northern Middle, will be in the PreTeen Miss category, and although she has very little experience with pageants she earned her spot this weekend by being named Miss Mill Springs in Monticello.

“It was a big victory,” BrynLee said.

For her public service work, she honored veterans by placing flags on their graves.

As stated before, her passion is singing, and her mother said that she takes lessons at McNeil Music Center.

Her coach for the pageant has been her choral director, June Correll. Correll said that BrynLee won the Farm Bureau Talent Show and placed fifth in state for soprano soloist for the Kentucky All-State Choir.

BrynLee is the daughter of Julena and Brandon Dugger.

The Correll family itself will be well-represented this weekend, with sisters Chloe, 8, and Bella, 5, entering the competition.

Mom Amanda said that June had been the primary coach for the girls. She’s also been their biggest cheerleader. The family also appreciates the support of all their friends and family.

Despite their young age, the girls both love being a part of pageants, Amanda said. “They always really enjoy it, and enjoy getting to make new friends and meet new people,” She said.

“It’s always a good time and a good experience for them to get up on stage.”

For their community service, Chloe and Bella visited and gave gifts to places like the Somerset Police Department, the Pulaski County Sheriff’s Office, The Somerset Fire Department and God’s Food Pantry.

Also attending Little Miss Kentucky this weekend will be 11-year-old Kriscelyn Randall and 14-year-old Reilly Smith. The two said they were both looking forward to this weekends events, though both admitted to being “bummed” about the absence of the talent competition.

Kriscelyn, whose parents are Angela and Christopher Randall, has been doing pageants since she was five months old.

Her mother, Angela, is a pageant coach, and said that Kriscelyn was looking forward to the pageant despite the fact she won’t be able to do her Jazz Dance solo.

Still, Kriscelyn said she had been working hard to prepare. And though she is a veteran, she was still expecting some new experiences. “I don’t do this pageant circuit, so I’m pretty excited to meet some new friends,” she said.

Her mother said that as part of her community service Kriscelyn had worked with the local Miss Abilities pageant as well as had her own tutoring program called KIKS – Kids Inspiring Kids’ Success – in which she helps students with disabilities.

“I competed last year, and it was a lot of fun,” Reilly said.

She has been into pageants since she was 10 years old. “They’re really fun,” she said. “I get to meet a lot of nice people, and I get to promote my platform, Rad Reads.”

Her Rad Reads program is where Reilly collects new and used books and hands them out to elementary kids.

Lori said she is proud of her daughter’s accomplishments. “She does a lot of community service. She makes straight A’s.”

On top of that, Reilly has also assisted the coaches of the Oak Hill Peewee Cheer Squad.

She also really loves to sing. “That’s my talent,” Reilly said. “I’m going to miss being able to do it, but maybe next year.”

Reilly is the daughter of Lori and Allen Smith, and the granddaughter of Pauline Barnett, Teresa Easter, Ralph Stogsdill, and Mary Larson.