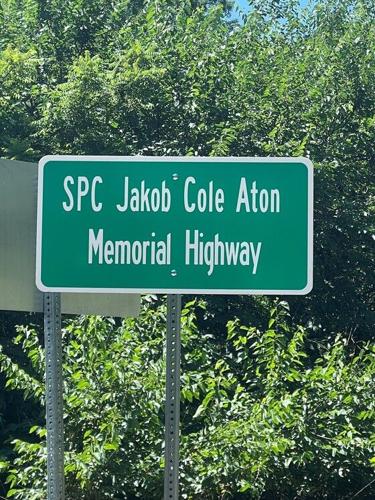 Ky. 1674 (Clifty Road) was renamed in honor of a local service member who died in 2020 while assisting at a wreck scene in Texas, with new signage put up Wednesday. 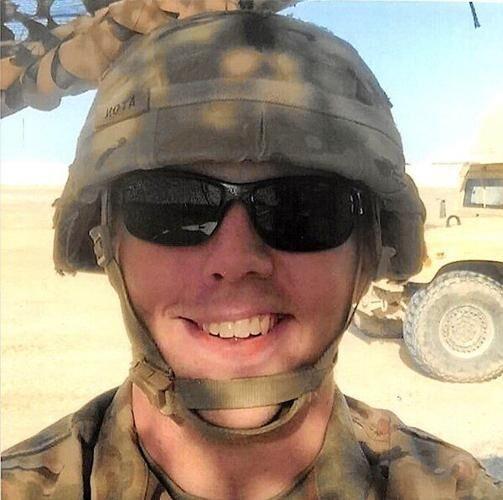 Ky. 1674 (Clifty Road) was renamed in honor of a local service member who died in 2020 while assisting at a wreck scene in Texas, with new signage put up Wednesday.

Jakob Aton lived as a hero, and he passed away as a hero. Now, a road in his hometown has been named in his honor.

Spc. Aton had been stationed at Fort Hood, where he served as a Patriot missile operator with the 69th Air Defense Artillery Brigade for the last two years, according to the United States Army.

On the night of Wednesday, August 12, 2020, Aton had been out celebrating his birthday with a group of friends and was headed back to base when they stopped to assist with a traffic accident on US 190/Interstate 14 in Killeen, Texas.

Aton was attempting to direct traffic around the scene when he was hit by another vehicle that came upon the accident.

Spc. Aton’s awards and decorations include the National Defense Service Medal and the Army Service Ribbon, according to the Army.

State Sen. Rick Girdler of Somerset helped lead the effort to have the roadway named in Aton’s honor.

“This kid was raised here, went to school here, and actually was in Kuwait, then came back here and was helping somebody, being a Good Samaritan, (when he was) killed,” said Girdler. He said his office corresponded with Aton’s mother about doing something in recognition, and it was decided that naming a roadway near his Pulaski home after Aton would be a suitable tribute.

Said Girdler, “We need to honor those who maybe were not killed in active duty or overseas, but who came back here (and did something like Aton did to help others). Those people are to be honored as much as those who died on a battlefield.”

Girdler said the road re-naming was part of a transportation bill passed by the state legislature late in the session, one of a number of such requests from around the state.

The honor also required a resolution by the Pulaski County Fiscal Court this past March. Pulaski County Judge-Executive Steve Kelley said they had to pass it at the local level to move it through to the state legislature, and he was pleased to see it be done.

“He truly was an American hero,” said Kelley. “He continued to be a servant even though he wasn’t actively in his military role. It was an honor to be able to honor him and the family. It’s a tragedy when death strikes somebody young like that.”

Amber Hale, spokesperson for the Kentucky Transportation Cabinet District 8 office, said there was no ceremony for putting up the road signage, as per family request.

Shorty following his death, Aton’s body was flown from Texas to Louisville, where he was met by his parents, Jacob and Melissa Aton, and a special escort to transport him to Pulaski County Funeral Home. The procession was met by additional first responders that joined in at Oran’s Truck Stop as well as the citizens who lined the highway in order to show their support.