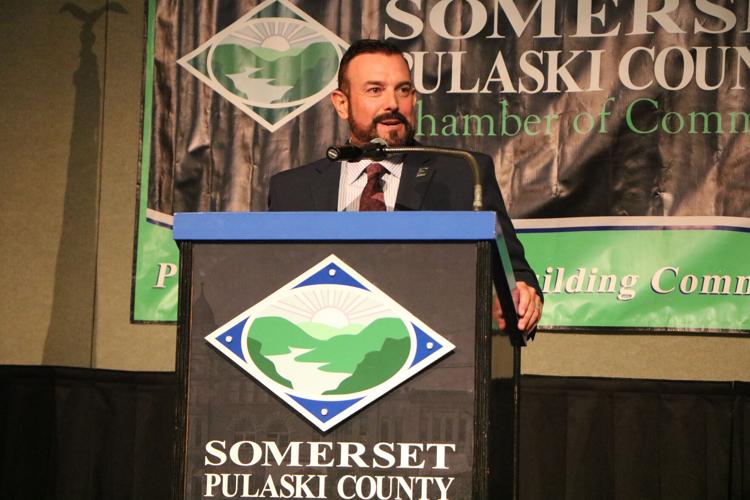 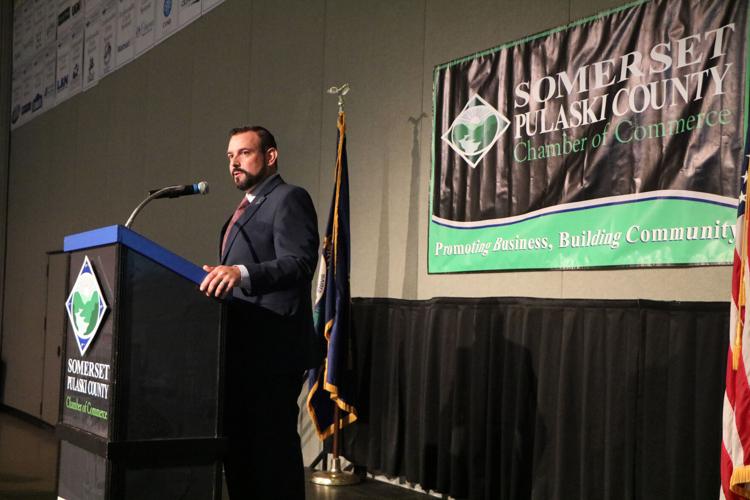 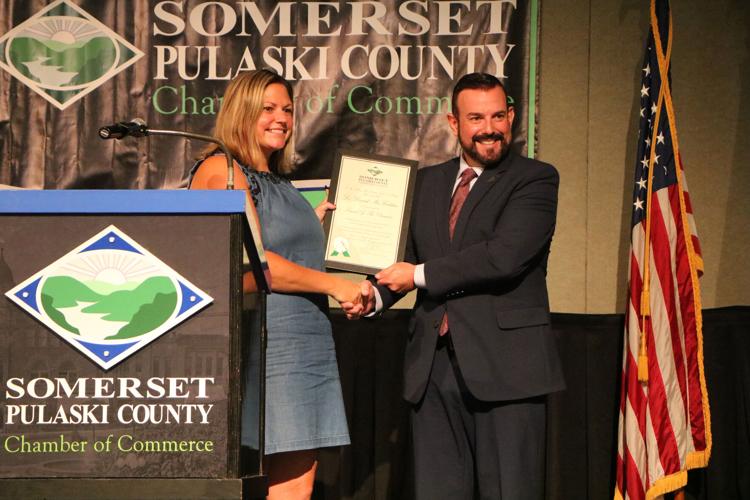 It’s a difficult time for the region known as eastern Kentucky, given the recent flooding that has devastated the area. The losses were heavy on the hearts of those at Tuesday’s Somerset-Pulaski County Chamber of Commerce luncheon, gathered to hear the president of the university which bears the identity of that region.

“2021 was our largest fundraising year ever, for those who are alums out there,” said Eastern Kentucky University (EKU) President Dr. David T. McFaddin, the featured guest speaker at the August luncheon. “The largest fund and the most activity that we saw over the last couple of years was our SAFE Fund, and that’s our Student Assistance Fund for Eastern. Those funds have gone to directly support students.

“... Over the last 24 hours, (that was) the most active fund to make sure we are supporting students who have been impacted by this flooding,” he continued. “While we’re doing things for students who are at EKU, we’re buying clothes, we’re buying computers ... but we’re also going to encourage you to look to the SAFE Fund in (your support). If you want to help those communities, we think that mustering those financial resources in one place is probably going to be the way to make the biggest difference.”

A native of eastern Kentucky, in Johnson County, McFaddin is the 14th President of Eastern Kentucky University, selected as the Interim President in December 2019 and fully appointed to the role in August of 2020. Before joining EKU, McFaddin held leadership posts with AT&T, the nation’s largest telecommunications provider, for nearly 15 years. His tenure there included major legislative, regulatory and strategic initiatives that paved the way for billions of dollars of capital investments in Kentucky.

Taking over at EKU just as COVID-19 became a threat to the operations of schools everywhere just like his, McFaddin overcame unexpected budget expenses, implemented a successful plan for a return to on-campus instruction, and established the Eastern Advantage, a plan to address college access and affordability.

McFaddin was not the only individual to touch on the turmoil currently being faced by the eastern region of the state. Lonnie Lawson, president and CEO of The Center for Rural Development, where the luncheon was held as always, noted this the facility would be a drop-off point for necessary items being donated to those affected by the floods, and they would be making regular deliveries of the donations.

Certainly, between COVID and this year’s flooding, it’s been a challenging launch to McFaddin’s time as president, but the aim now is to lead through the latter as he did through the former, noting that “getting back to being fully on campus ... was important for us.” Opening back in the fall of 2020, “it was different than we’d seen before ... it didn’t feel like a college campus.”

The feel that they’ve helped create, though, is one that is as much or more intimate that a high school setting, holding a 15:1 student-to-faculty ratio, which helps ease young students into the college experience. For the coming school year, there are 346 students from Pulaski County Schools and Somerset Independent Schools enrolled at EKU, included 50 freshmen and 32 transfers.

EKU maintains the highest post-graduation employment rate among Kentucky’s public institution, with graduation rates increasing more than 10 percent in the last eight years. For the 2022-23 school year, the Richmond-based university is planning on welcoming one of its largest freshman classes over the last couple of decades, at 2,800 newcomers. Overall enrollment will be up for the first time in the last six years, said McFaddin, and the college is running at 104 percent occupancy in dorms, and McFaddin noted that the school is really starting to dig its way out of the COVID disruption.

McFaddin said that 40 percent of the EKU student body are the first in their family to attend college, and considered the positive transformational ripple effects that will have not just on their lives but those of their children and grandchildren.

McFaddin talked about some of EKU’s programs, including aviation — the only four-year flight program in Kentucky, he said — nursing, risk management and insurance (ranked no. 1 in the nation this past year), professional golf management (one of 16 such programs in the nation), global supply chain management, and homeland security. McFaddin also said the school is gearing up to offer its first engineering program.

The university’s fastest-growing program, however, is in the area of mental health services and psychology, said the EKU president. “That is the crisis that we’re dealing with on college campuses, and I imagine that it may be the thing that you’re seeing in your community,” he said, “the exponential growth of need for mental health services to make sure that we know that it’s okay to not be okay, and that we’ve got resources and support services to surround students to talk about these things is absolutely important for us.”

McFaddin said that following the arrival of the COVID virus, “We said we can either view this as a disruption and we can wait to see what happens, or we can say this is accelerant. Let’s see if we can get to the places we want to be faster. and we opted for the latter. ... Providing that student support, providing those textbooks, making sure that when the race has started, everybody starts on the starting line at the same point, that is something that was really important for us.”

McFaddin was presented after his presentation with a “Friend of the Chamber Award,” and State Rep. Josh Bray of Rockcastle County, who also represents part of Pulaski County after this past legislative session’s redistricting efforts, was recognized by the Partnership for Commonsense Justice for his efforts to help the state’s unfavorable liability climate, Chamber Executive Director Bobby Clue announced on Tuesday at the luncheon.