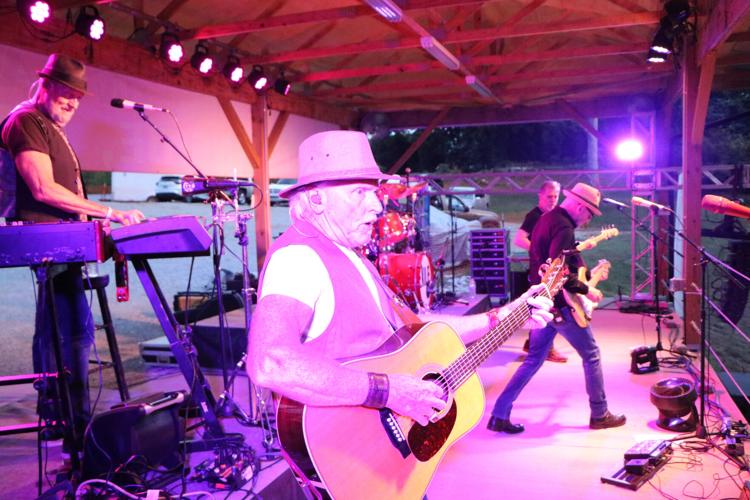 Exile performed in Burnside’s Cole Park Friday as part of “Thunder Over Burnside.” 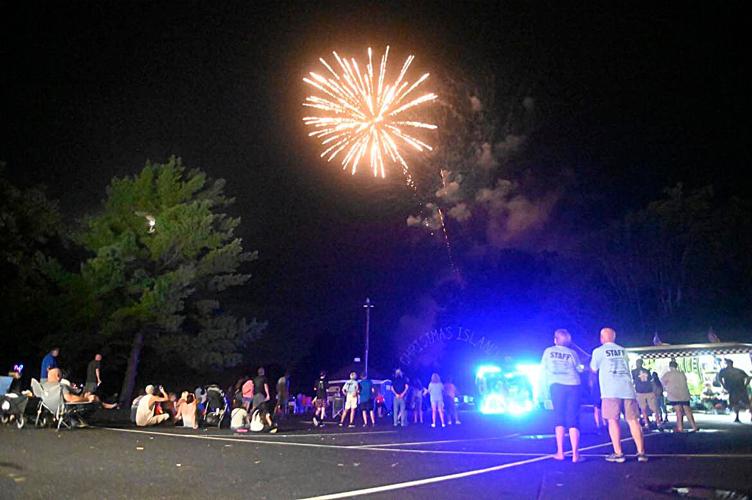 The Labor Day weekend “Thunder Over Burnside” concluded on Saturday evening with a firework show. 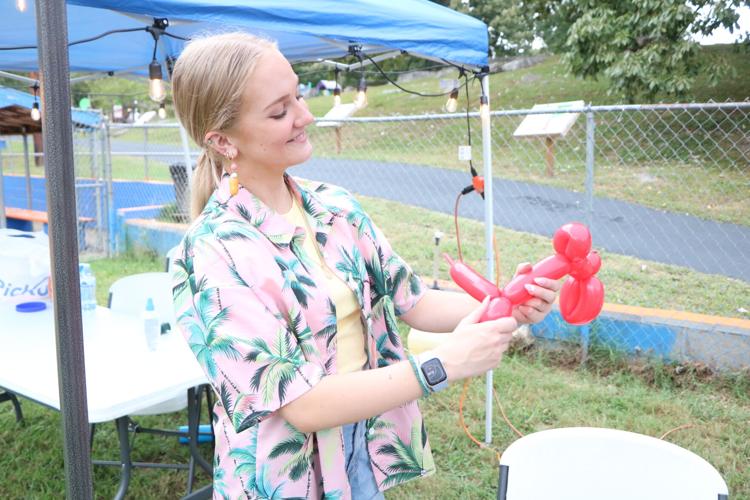 Jules Timmons makes a balloon animal as part of the fun at this year’s “Thunder Over Burnside.” 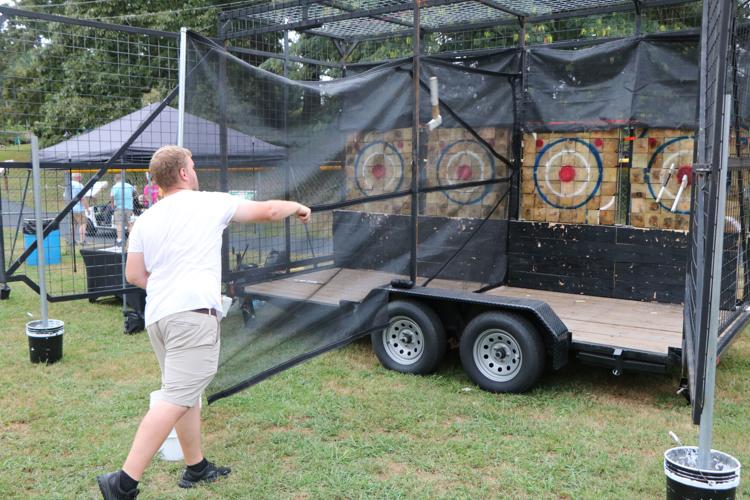 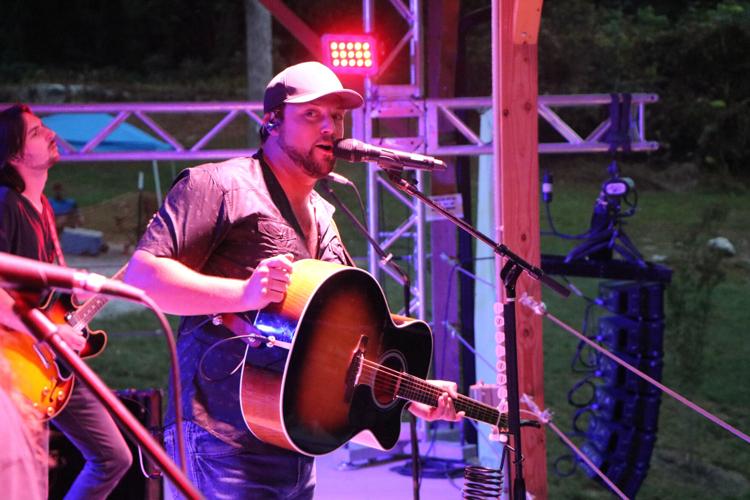 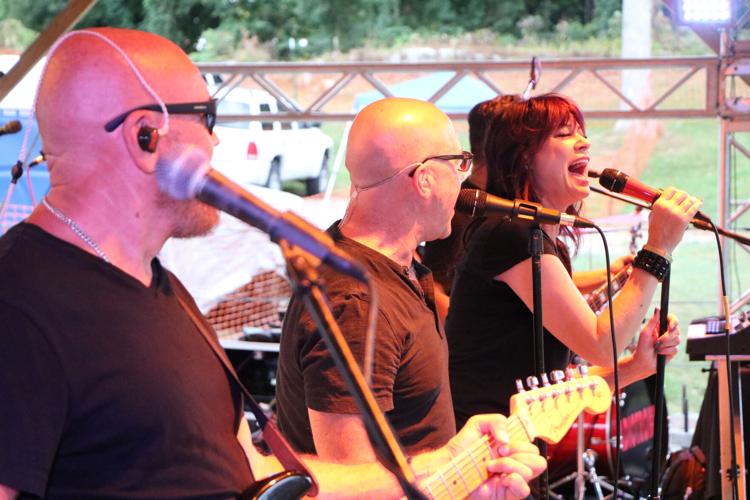 All weekend long, potential rain forecasts threatened to make “Thunder Over Burnside” a soggy Labor Day affair. But despite some ominous clouds, the only thunder to be heard was the sound of fireworks, and applause for the musical acts.

Hundreds of people gathered at Cole Park in Burnside on Friday and Saturday nights to hear performers like Exile and Walker Montgomery, enjoy festival fun like funnel cakes and axe throwing, and “ooh” and “ahh” at the sight of pyrotechnics in the night sky.

Those fireworks are part of the Labor Day weekend event because of the ramifications of Covid concerns in 2020, as Burnside’s annual fireworks show on Independence Day was pushed back to September. City officials liked the festival as a sort of “end of summer blowout” so much that they decided to leave “Thunder” as a farewell to the yearly tourism season which is Burnside’s economic lifeblood.

Burnside Tourism Director Alison Pyles noted that around 300 people were at Cole Park Friday night to hear Exile, one of the most iconic Kentucky-grown acts in the annals of popular music. Exile, the band perhaps best known for its 1978 pop hit “Kiss You All Over” as well as a long career in the country music genre, had played in Somerset and Pulaski County numerous times over the years. But never in Burnside, as least as far as the band itself could recall — until Friday night.

“For Friday night, I was very happy with it,” said Pyles on Saturday. She noted that although the second day’s crowd started off slowly, it steadily grew as the evening continued.

After Tone Control opened for them at 6 p.m. Friday, Exile went on at 8 p.m., under cloudy skies that fortunately held off raining as they took the stage.

It was a homecoming for Marlon Hargis, a local member of Exile which formed in the early 1960s in Richmond, Kentucky. Somerset was a common stop for the band in their early days, but they’d take much larger stages as they enjoyed increased success.

“We were talking earlier, I don’t think we’ve ever actually played in Burnside,” said Hargis shortly before the band took the stage. “I grew up in Somerset, took piano lessons from (late music teacher Thelma Harris). It’s always fun to come back and run across people I haven’t seen frankly in decades.

“People are extremely friendly here, and that’s the good thing about small towns. People are glad to see you and treat you well,” he added. “It’s always fun to come to these kinds of venues.”

Originally called the Exiles, the band did not originally include Hargis, but he was part of it in time for the release of “Kiss You All Over” as a keyboardist, which held the top spot on the Billboard “Hot 100” for four weeks in 1978.

As a country band, Exile continued to be strong in the ‘80s, with hits like “Woke Up in Love,” “She’s a Miracle,” and “I Can’t Get Close Enough” and three straight top 10 albums on the Billboard Country charts. Though the membership has shifted around some over the years, Hargis noted that the core group that was there for the band’s biggest success is the group that’s still there making up Exile.

“We’ve been together, most of us, for most of the time,” said Hargis. “When you’re seeing this particular line-up, we’re the guys who played on all the records and stuff. You may have some bands that have one original member. There are some touring bands that don’t have any original members, so we think we have a little more legitimacy.”

Exile is still plenty active. Hargis said they’ll probably play about 50 or 60 dates this year, and next year may be more. Following the shutdowns of public events due to Covid concerns in 2020, Hargis said it’s taken a couple of years to get things “back to normal,” but the interest in Exile, a band that’s been in the public spotlight for decades, is still strong. In fact, the band noted that next year will mark Exile’s 60th anniversary.

“It’s very gratifying,” said Hargis. “(‘Kiss You All Over’) was our one big pop hit, but in country, we had almost a dozen number one hits. ... It’s kind of hard for us to believe that song is still that popular. It’s been used in a lot of movies and a lot of TV series. It just never goes away. We’re not complaining, that’s for sure.”

He added, “I think country audiences tend to stick with you over the years. Rock and roll audiences are young, they grow up, they forget about you, and the next big thing comes along. We have people that have come to see us for 40 years off and on.”

On Saturday, Radiotronic warmed up the crowd with covers of popular hits from yesterday and today before Montgomery took the stage. Montgomery, known for songs like “She Don’t Know” and “Out of Nowhere,” is the latest in a line of country music royalty from right here in the Bluegrass State. His father is John Michael Montgomery, and his uncle is Eddie Montgomery of Montgomery Gentry.

One way in which it definitely helps is with the situation the younger Montgomery faced on Saturday night — the band’s bus broke down on the way to Nashville. Fortunately, John Michael was able to give them an assist, and the show went on as planned in Burnside Saturday night, right on time.

Montgomery said he enjoys playing small town venues like that offered in Burnside, and considers the audience in these communities to be “the people who listen to my music” — making him want to give them the best show that he can.

“When I’m back home in Kentucky, I’m always happy to be here,” said the Nicholasville native. “Any show that comes through the booking agent that’s in Kentucky, I try to take, and especially since this is so close to Nashville, where I live now. So it’s always special to be home, and growing up I spent time on Lake Cumberland. So it’s a familiar territory for me.”

The 2022 “Thunder Over Burnside” was sponsored by Kingsford Charcoal, a business with a presence in the southern Pulaski County community.

POLL QUESTION: If the Presidential Election was today would you vote for Donald Trump?