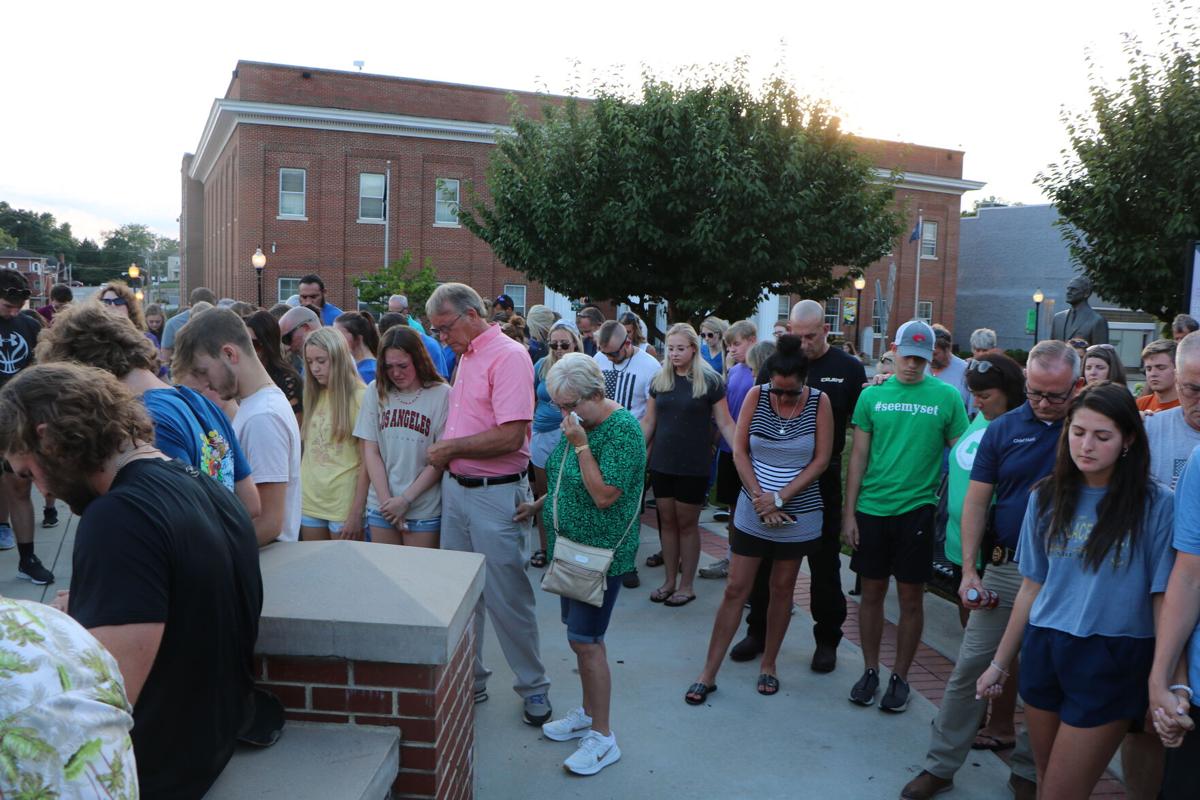 Hundreds of people gathered on the Fountain Square in Somerset on Thursday night to offer hope and prayers for local teenagers Carlee Whitis and Ethan Carter, who were injured in a wreck Wednesday evening. 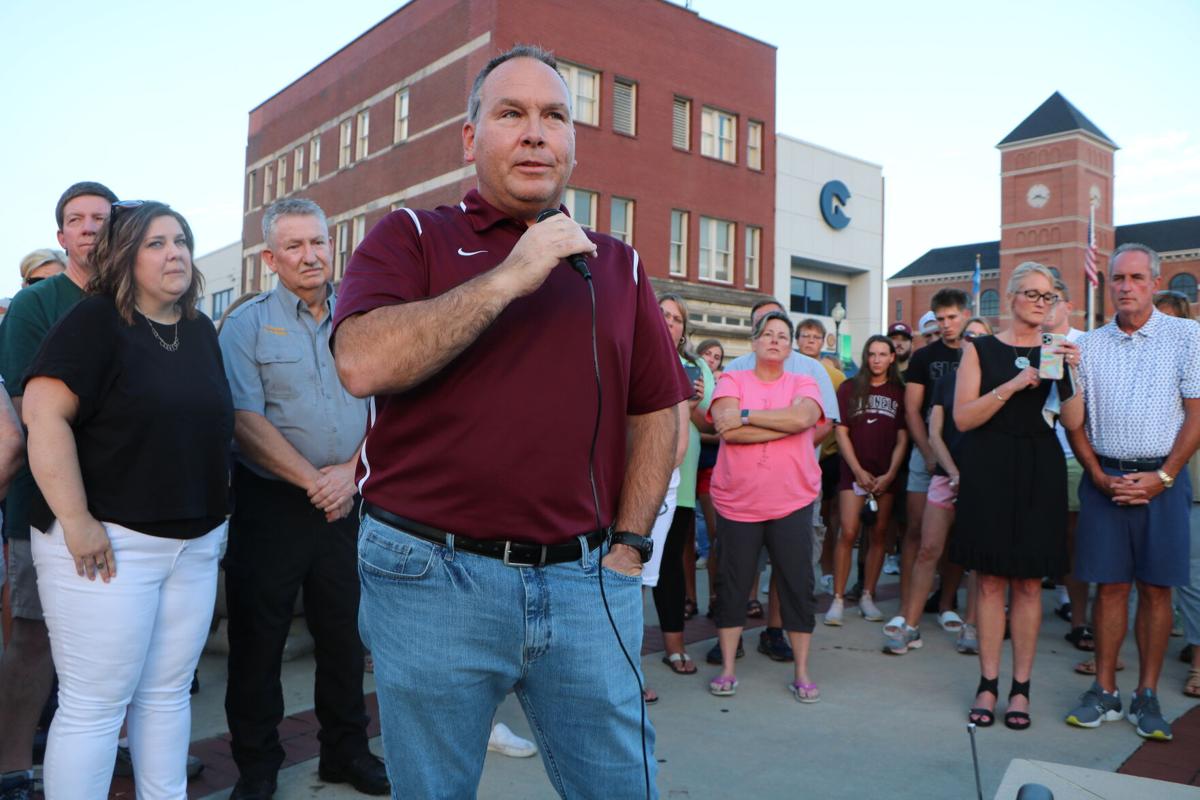 Hundreds of people gathered on the Fountain Square in Somerset on Thursday night to offer hope and prayers for local teenagers Carlee Whitis and Ethan Carter, who were injured in a wreck Wednesday evening.

A vigil for prayer and hope in the face of tragedy took place Thursday night on the Fountain Square following a horrific accident Wednesday evening.

Hundreds of people gathered in downtown Somerset at 8 p.m. to share their thoughts about Carlee Whitis and Ethan Carter, two local 19-year-olds who are fighting for their lives as of Thursday night.

The pair were injured in two-vehicle wreck that took place Wednesday around 5:23 p.m. at the intersection of U.S. 27 and Ky. 70. Though it was reported at the ceremony Thursday night that both are stable at the University of Kentucky Medical Center, they have suffered serious injuries.

The mood was somber and emotional, with many tears shed, yet full of faith for God to heal Carter and Whitis.

"Let me just remind you that we must believe," said Clyde Strunk, a local minister as well as the county coroner, who spoke at the vigil. "Praying without believing is not effective. We must believe that God can hear our prayers, and that God's will will be done. ... I know we all want God's will done, but we've got to pray that God's will is that Ethan and Carlee will be healed, that they will be touched by the Master.

"These young people that organized this, when they begin to pray, I believe that even the angels stand up and take notice," he added.

A number of friends, and loved ones of the two young people involved took the microphone, shared positive words and memories, and offered their own prayers. The event ended with a song of faith being sung by everyone gathered around the fountain — and the vigil and music was recorded so that Carter and Whitis could watch it.

Brooke Hopkins, a classmate of the two at Pulaski County High School, said she's been close friends with Whitis since middle school.

"In moments like these, we think about all the amazing moments, and that's what we need to think about, is the good," she said. "... Carlee and Ethan are the kind of people you see as anchors, the friends that are always there for you. They're the friends that you can always count on, and sometimes we take those people for granted. So anyone here, before you drive, tell your mom and dad you love them. Tell your friends how much you love them, how much you appreciate them."

One of those to speak was Rodney McAninch, principal at Pulaski County High School, where he helped Carter and Whitis get their education.

"When I got this news (about the wreck on Wednesday), I spent a lot of time looking at their pictures on Infinite Campus and just thinking and trying to recollect my interactions with them," said McAninch. "I know their families, I know them, and it's hard to know what to say. ... I will just tell you, I don't get the chance a lot of times to say what I would like to say at school. But I will say here now, to all the young people here, it is so powerful to me to hear what's being said. No matter what school you go to or where you are from tonight, it is my wish and my hope that you obey the gospel and be baptized. To the parents of the kids, I would just say that you entrust them to us, and there's not a day that goes by that we don't think about their safety and pray for them, and they are a treasure that you share with us. To all you kids here that we've had and those that are not, know that you are loved."

Kim Somerlott, who works with Whitis at Midway Veterinary Hospital in Somerset, said that she was missed at the workplace on Thursday.

"It wasn't right, not having her smiling face come bubbling around the corner, asking us if we needed help," said  "We have all been heartbroken. We've been praying all day. Our group text that we have for everybody on staff has been completely blown up. ... I've seen (Whitis) grow and blossom into being an amazing young woman, and she has so much ahead of her. We all love her and she is part of our family, so if we are not right, if you come to the clinic or call us and we are tearing up, just give us a hug. We need that right now, more than anything."

Madalyn Dudley, who was in the 2021 graduating class at Pulaski County High School with Carter and Whitis, was one of the young people who helped organize Thursday's prayer gathering. She was pleased to see such a large turn-out — and knew that her dear friends would be as well.

"Carlee or Ethan knew every single person here," said Dudley. "I can attest to that because I've seen her interact with so many people. They're just such a great couple, not just to themselves, but to everybody around them. They are always such a bright influence on people and they truly love each other so much, and so I think tonight was not only a testament to them, but also just the faith that they showed other people. I just know that if they were here, they would think it was special too."