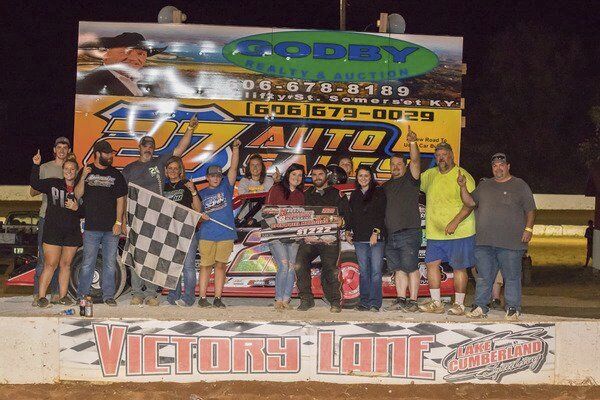 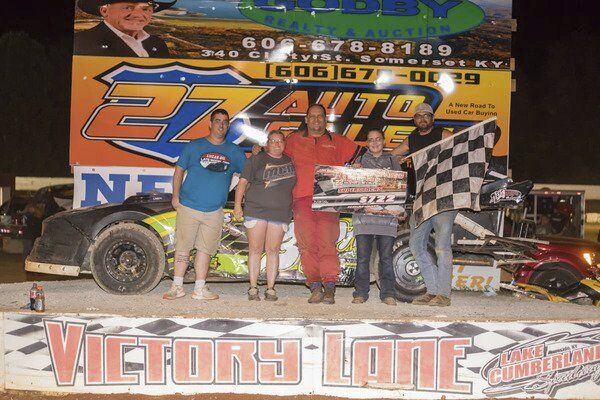 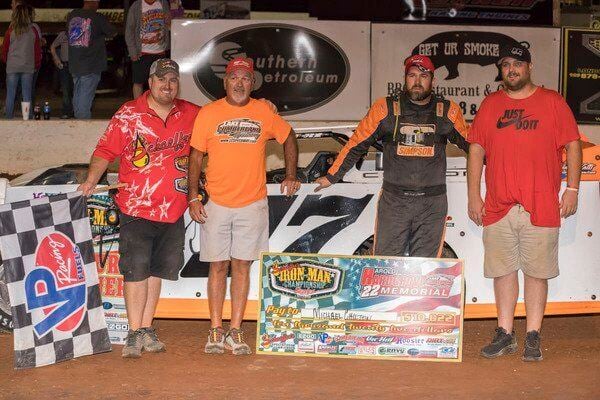 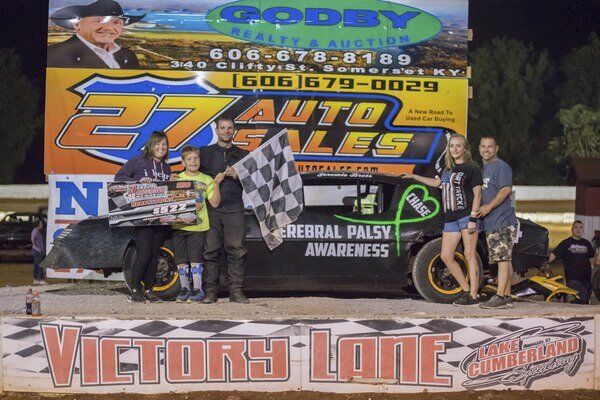 Jeremy Bretz made it clean sweep in the Gearld's Auto Parts GrassRoots Hobby Stock Saturday at Lake Cumberland Speedway. He was fast qualifier, won his heat and went on to take the A-Main win

Jeremy Bretz made it clean sweep in the Gearld's Auto Parts GrassRoots Hobby Stock Saturday at Lake Cumberland Speedway. He was fast qualifier, won his heat and went on to take the A-Main win

BURNSIDE - The Schaeffer's Oil Iron-Man Championship Late Model Series presented by DirtonDirt.com would visit Lake Cumberland Speedway in Burnside, KY for the first time in the 2020 season on Saturday evening for the 9th Annual Harold Hardgrove Memorial and Michael Chilton of Salvisa, KY would put his machine in victory lane for the biggest win of his career with the $10,022 payday and his second career victory in the Harold Hardgrove Memorial event.

The win by Chilton would be his first of the season with the tour and the second career series victory for the 34-year old racer. Chilton would drive his Rocket Chassis, Bullock Race Engines powered MKC Transport, Caton Industrial Painting, Parkview Home Center, Dial Painting, Budda Bert Transmissions Sales and Service, Irvin Enterprises, and Brucebilt Performance sponsored to the win.

Michael Chilton would take the lead from his outside front-row starting position and the start of the contest, with Skylar Marlar, Tommy Bailey, Tyler Erb, and Devin Gilpin second through fifth. The front five would remain the same as the first caution waved on lap four for a three-car tangle and the restart would also see the caution reappear for another three-car tangle.

The restart would see Chilton and Skylar Marlar maintain the top two spots, with Erb would work past Bailey for third on lap five, with Gilpin taking fourth on lap six, and Cameron Marlar making his way into the top five one tour later on lap seven. Chilton would begin working slower traffic on lap ten and would maintain a comfortable lead, while Cameron Marlar would take the fourth position from Gilpin on lap fifteen. Chilton would get into heavier traffic by lap twenty-two and this would allow Skylar Marlar to close in and for Erb to reel in both. Just as business was about to pick up for the lead, Rod Carter, Jr. would slow his machine with mechanical issues and draw the caution flag.

Chilton would maintain the lead on the restart, while Erb would get by Skylar Marlar, while Victor Lee would make his way to fifth. Caution would appear again on lap thirty-four for spin by Bailey in turn one, while the restart at this point would see the top three remain the same, while Lee would take the fourth position from Cameron Marlar. The final caution of the race waved on lap forty-one for Donald McIntosh's disabled machine on the backchute. Chilton would get a great restart, while Skylar Marlar would challenge Erb for second and grab the spot with a slider off of turn four to complete lap forty-one.

Chilton would hold the lead, while Marlar, Erb, Lee, and now fifth-place running Dustin Linville would begin to mix it up as the five lap to go signal was show. Chilton would begin to pull away at this point, while Lee would drive between Marlar and Erb and go from fourth to second into turn one on lap forty-seven. Chilton would see the checkered flag first, with Lee taking second, and Skylar Marlar finishing third. Linville would make a turn four, last lap pass of Erb for fourth, with Erb settling for fifth. Gilpin would finish sixth after driving better than half of the event with right-rear suspension damage, with Tanner English, Ryan King, Bailey, and Justin Rattliff completing the top ten finishers.

The Schaeffer's Oil Iron-Man Championship Late Model Series presented by DirtonDirt.com next events will be Friday, Sept. 18, at Ponderosa Speedway in Junction City, KY and Saturday, September 19 at Lake Cumberland Speedway in Burnside, KY. Both events will pay $5,000 to win. Also, the Brucebilt Performance Iron-Man Modified Series will be in action at both events, paying $1,200 to win each night.

4 Cylinder Feature- Postponed due to rain