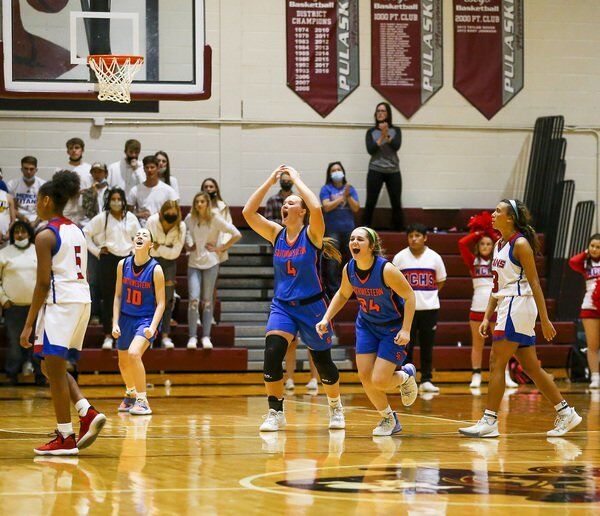 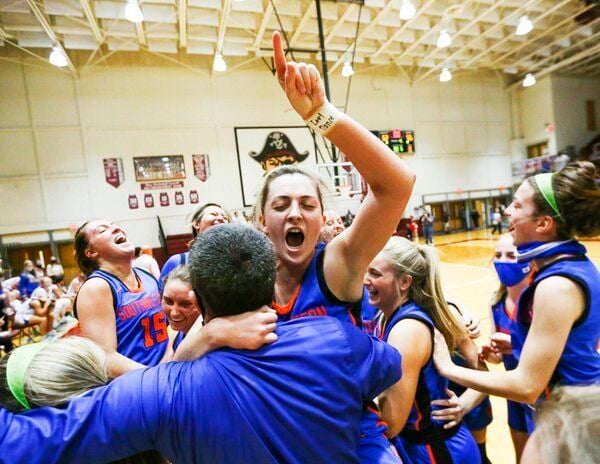 "Most publications had us predicted to finish 5th or 6th in our 12th Region before the season started and second behind Wayne County in the 48th District," stated Southwestern High School girls basketball coach Junior Molden. "And I get it, we lost five seniors which was most of our offensive production from the previous season and a lot of new faces were going to have to develop more for us to be in the conversation for this region, but we had a big chip on our shoulders when different sport’s media started saying we were rebuilding. I took it personal, as well, because I coached all these girls through middle school, freshmen, and JV, so it’s more on me than anyone to already have them developed and ready to compete at this level."

As a championship game should be, this one was an absolute thriller.

Southwestern stayed a step ahead for majority of the first half, and began to grow a lead in the third period. However, the Lady Titans stormed back and trailed right on the heels of the Lady Warriors at 41-38 heading into the fourth period.

Mercer's run overflowed into the fourth, and after a 9-0 start to open the fourth quarter for the Lady Titans, coach Molden called a timeout to regroup.

This was a crucial timeout, as the Lady Warriors went on an 8-0 run just after, which featured two inside baskets each from seniors Marissa Loveless and Alexa Smiddy, and the score was even at 49-49 midway through the quarter.

Throughout the remaining minutes of the game, Smiddy took the game into her hands, as she drove to the basket nearly every possession and either drew a foul or got a bucket. She also got a crucial steal and assist to junior Kaylee Young that gave Southwestern a 59-55 lead late in the fourth.

Timberlynn Yeast, who had been a problem for the Lady Warriors all game, tried to get her Lady Titans back into it, but they fell just short at 62-56.

Southwestern's two seniors, Loveless and Smiddy, were the top performers on the night for the Lady Warriors and led them to the win. Smiddy led them in scoring with 17 and achieved a double-double with 10 assists. Loveless also had a double-double performance with 12 points and 11 rebounds.

On the other side, Yeast left it all on the court for Mercer and finished with a game high 32 points. Stevie Shepherd also reached double figures with 16.

The Lady Warriors began the night with the momentum in their favor as they opened the first period with an 8-0 run that featured a pair of inside baskets by Loveless, and a basket in the paint each from Young and junior Kylie Foreman.

Mercer was able to make up some ground with three inside baskets by Yeast and a three from Ryann Tharp. During this 9-5 run, Southwestern had another inside bucket from Foreman and a three by sophomore Ayden Smiddy off a pass from Al. Smiddy and the Lady Warriors led 13-9 heading into the second.

The Lady Titans opened the second period with a steal and inside bucket from Yeast and a three point play by Anna Drakeford to give them their first lead of the game at 14-13.

However, after those baskets, the Lady Warriors outscored Mercer 17-9 for the remainder of the quarter to lead 30-23 at halftime.

During that run, Southwestern had six from Foreman, two from Al. Smiddy, three from Ay. Smiddy, two from Young, and four from Loveless. All nine of the Lady Titan points were scored by Yeast.

After the break, Al. Smiddy took control with a driving layup and assisted freshman Kinsley Molden, Foreman, and freshman Payton Acey on inside shots.

Despite Smiddy's play, Mercer outscored Southwestern 15-11 in quarter to cut the deficit to three.

While the Lady Titans gave the Lady Warriors a scare in the fourth, but Southwestern held strong and battled back to win a 12th Region title and advance to the Sweet 16.

"Mercer County gave us everything we wanted and more," Molden stated. "That program has sent us home way too many times in regional tournaments. Coach Spivey had a great game plan face guarding our three-point shooters today, but we had a strong inside presence with Kylie Foreman, Marissa Loveless, and Payton Acey. Those girls had to come up big today and they did. When we’re down six points with less than five minutes to play during my last timeout, I seen the determination in my players' eyes and I know they seen the confidence in mine. We adjusted well during that timeout and my girls left it all on the floor with no regrets to become 12th Region champions. I love my team."

Molden, who captured his first regional crown as the Lady Warriors' head coach, knew he had to make some adjustments midway through the season.

"I decided about midway through the season that if we were going to have a shot to compete for a region title, I had to go with a 4-guard lineup," Molden explained. "Since then we have won 12 games in a row and got much better defensively during that time. I was criticized and told you can’t play four guards and shoot all them 3’s and think you can win a region."

"We’ve shot over 40 percent from 3-point land since and proved a lot of people wrong," Molden stated. "I told our girls today, before we got on the bus to come play Mercer County, that the greatest pleasure in life is doing what people say you can not do. I’m so proud of these young ladies and all of them buying into our 'We greater than Me' culture. It’s paid off for us with a trip to Rupp Arena to celebrate the conclusion of our season."

The win put the Lady Warriors at 20-3 on the season and they will take that record into the first round of the Sweet 16 Girls Basketball State Tournament, where they will face the 8th Region champion on Wednesday, April 7 at Rupp Arena in Lexington.