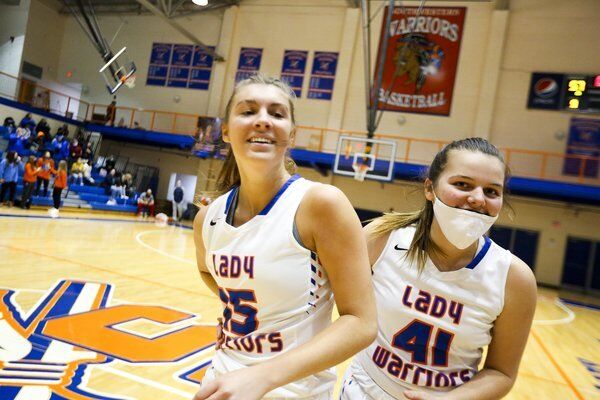 McKayla Noritis (left) celebrates with freshman Audrey Teeter after the Lady Warriors defeated Danville 61-57. Noritis hit a go ahead three to seal the win in the final seconds. 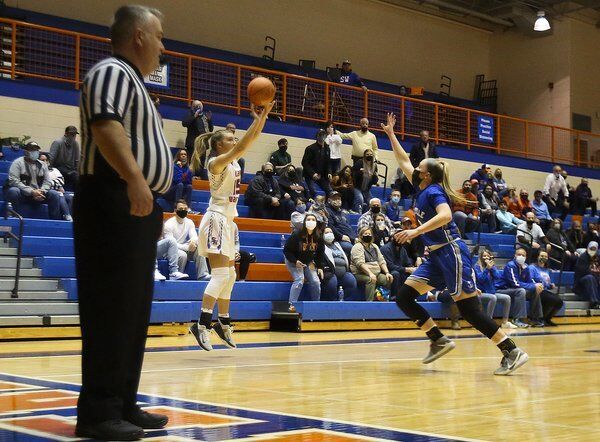 McKayla Noritis (left) hits a go ahead three in the closing seconds to help seal the Lady Warriors 61-57 win over the Lady Admirals on Tuesday night.

McKayla Noritis (left) celebrates with freshman Audrey Teeter after the Lady Warriors defeated Danville 61-57. Noritis hit a go ahead three to seal the win in the final seconds.

McKayla Noritis (left) hits a go ahead three in the closing seconds to help seal the Lady Warriors 61-57 win over the Lady Admirals on Tuesday night.

Tuesday night at Southwestern, two of the top 12th Region girls basketball teams met, and as you would expect, it was a fun one.

Danville managed a 17-7 run in the fourth that evened the score at 54-54 late in the period. Their run featured a pair of driving layups from Love Mays, an inside bucket and pair of free throws from Jenna Akers, a couple free shots and driving layup from Desiree Tandy, three free throws from Camryn Preston, and a pair of free shots from Lara Akers.

Southwestern's seven during the Admiral run came from a three by freshman Kinsley Molden, an inside bucket and free throw from junior Kylie Foreman, and a free shot from sophomore Ayden Smiddy.

After the run, the Lady Warriors took back their lead with a pair of free throws from Molden, but Danville answered and took their first lead of the game with a three by Jenna Akers.

Just as quick as the Admirals obtained their lead, they lost it when senior Alexa Smiddy assisted junior McKayla Noritis on a three that gave Southwestern a 59-57 lead.

After shots by Ahyana Burnett and Jenna Akers that did not fall in, Noritis was fouled and put in both free shots to give her Lady Warriors a 61-57 victory.

When asked about the performance Molden said "We struggled on defensive rebounding as Danville had fifteen offensive rebounds for the game against us. We need to clean that up if we want to be considered in the conversation for 12th Region. We shot the ball well again from three point land at 41 percent, I will take that every day. I could have done a better job managing the game late. We had 22 fouls to Danville's 15 for the game and I feel that's on me and how I rotated my lineup in the second half when we got tired. We need to get better defensively and not foul. Kinsley Molden came off the bench and was big time for us tonight playing her best varsity game to date. Kylie Foreman was a force in this game offensively which opened up our perimeter game. McKayla Noritis saved us late after we lost the lead with two big rebounds, a monster go ahead three pointer to retake the lead, and then two huge free throws to seal the game."

While Danville played hard late, it was all Southwestern at the very start of the game.

After a contested three by Lara Akers off an assist from Mays, and a pair of successful free throws by Mays that cut the Southwestern lead to just three, back to back threes from Alexa Smiddy and Molden extended the lead to nine at 16-7.

A reverse layup from Molden for the Lady Warriors, and a mid range shot by Mays and inside bucket off an offensive rebound from Tandy put Southwestern up 18-11 heading into the second period.

"Really fun game to be involved in," said coach Molden. "I was worried being senior night that our emotions would cause us to have a slow start, but we came out playing well and with a purpose to my surprise early."

The teams played a near even second quarter which left the Warriors on top 31-25 heading into halftime.

Throughout the second Southwestern had a mid range shot and free throw from Loveless, a three from Acey, and inside shot and three from Foreman, and a pair of free shots from junior Aubrey Daulton.

On the other side Danville had seven from Preston which included three inside buckets and a free throw, a three from Lara Akers, an inside basket by Tandy, and a pair of free shots from Burnett.

After the break, the Lady Warriors used their momentum and pushed their lead into double figures.

During the quarter they had an inside bucket from Loveless, a pair of threes from junior Kaylee Young, a driving layup and mid range shot from Alexa Smiddy, and two layups from Molden.

Danville had a pair of free shots from Tandy, a free throw from Preston, two mid range shots and a driving layup from Mays, and an inside bucket and free shot from Lara Akers in the third, and trailed 47-37 going into the fourth quarter.

While the Admirals came up with a nice comeback in the fourth, the Lady Warriors held on and landed a victory in a show down between two of the 12th Region's top teams. This could be a look at a matchup for the 12th Region Championship down the road during post season play.

"I love my team and where we are on January 12th," said coach Molden. "I know Coach Mason will have her team much improved and ready to play by regional time. The plan is the same for me to continue growing my team and just make sure our girls enjoy this process and not take playing basketball for granted in these times we live in."

The bout put both teams at 2-1 on the season, and the Lady Warriors will be back in action Friday night where they will face the South Laurel Lady Cardinals on the road.