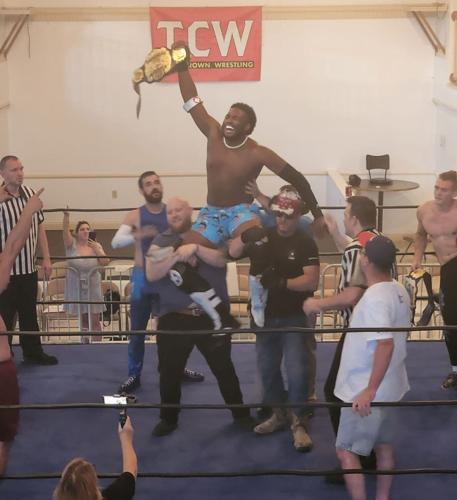 Izzy Vaden celebrates after an upset victory for the TCW world title. 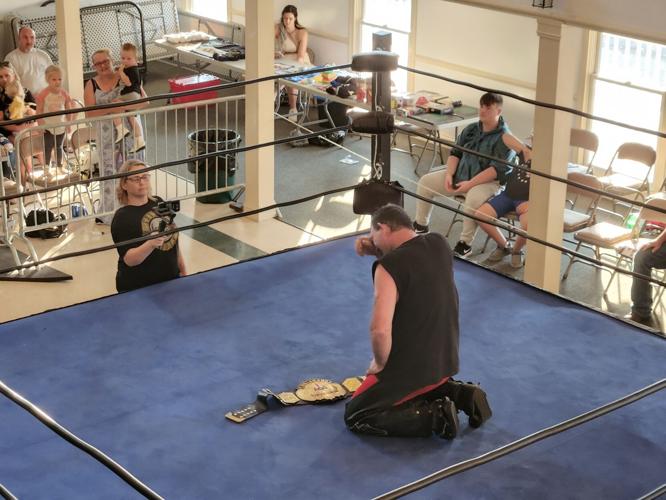 Izzy Vaden celebrates after an upset victory for the TCW world title.

LIBERTY – What a night of action this was. Triple Crown Wrestling provided quality entertainment with an action packed card for the citizens of Liberty, Kentucky. Owner, Brandon T. Wilson pulled out all the stops to entertain his hometown and it was a night for the ages.

The card featured six big matches starting with fan favorite and TCW resident redneck “Blue Collar” James Caney vs. Adrian Alexander. This match was way more than expected. Caney and Alexander put on a fight, but it was Alexander that wowed the crowd when he made his way to the balcony and tried a flying crossbody on to Caney. This almost ended in upset for Alexander as Caney nearly caught him for a powerslam, but the momentum was too much and both combatants went to the ground. However, Caney rallied and defeated Adrian Alexander via pinfall. (Referee Jonathan Barnes).

The next match on the card featured Joker Jones vs. Rage Adams w/Tony Corral. As expected this match was about to turn in Rage Adams favor due to Tony Corral being in his corner. However, referee Donnie Smith ordered Corral to the back in response to previous incidents involving Corral. After Corral was exiled from ringside Joker Jones at first controlled the match, but it wasn’t long till Rage Adams took over. Adams tightened the offense onto Jones, but Jones rallied and defeated Adams via pinfall.

The third match with referee Jonathan Barnes officiating was a tag-team bout featuring Dominick McVay & The Killbilly Evil Nate vs. Chris Matthews & 747. Matthews had an announcement that his original tag-team partner DeWayne Davis could not be there which prompted the entrance of Dominick McVay. Davis has been avoiding and canceling matches or using some type of clause or trickery to not have to face McVay.

This tag-team bout was prompted by Davis after no-showing in Shopville, Kentucky in May. Chris Matthews came to Davis’s side and joined for this tag team match. McVay had a lot to say about this as he addressed Matthews. Trying to show a strong front Matthews was visibly upset with Davis, but 747 entered and explained that Davis had hired him, (repeat of his actions in Shopville) to take care of McVay. Things began looking up for Matthews as he calmed and accepted the help. However, the final participant with his eight foot chain saw enters and the crowd erupts for The Killbilly Evil Nate and he wants the mic. Nate, usually a man of little words and a lot of actions even got into the DeWayne Davis subject saying “that it sounds like this Davis guy is more elusive than bigfoot and from what it looks like he’s in competition with bigfoot for the hide and seek world championship.” The match continued with a lot of action and the team of McVay and Killbilly controlling the majority of it. It looked as if the 747 may be the person to turn the tide, but it was quickly met with an onslaught from their opponents with McVay and Killbilly being victorious via pinfall.

The next match was for the TCW All-American Championship. Champion Tyler Logan vs. Tony Corral w/Rage Adams. As noted earlier, Referee Donnie Smith ordered Corral to the back, but would allow Adams to remain at ringside feeling no threat to this match. A very competitive match especially with the size difference of each participant. The champion would control this match for a while, but the size disadvantage of Tony Corral would prove to be too much for the champion Tyler Logan to overcome and Corral would be crowned the new TCW All-American Champion via pinfall.

In the fifth match it was to crown the first-ever TCW World Tag-Team Champions. Going into this bout we saw an unlikely alliance with former TCW World Champion Cameron J. Walker and Marty Clay joined together after their match in Shopville, Kentucky in May. Walker & Clay would challenge Stonewall and Ray Waddell for the titles. Waddell and Stonewall would mount an offensive that nearly toppled Walker and Clay. However, the duo rallied and after an understanding that Cameron J. Walker did not have to resort to unsavory tactics the team won and became the first TCW World Tag-Team Champions via pinfall. Referee Jonathan Barnes officiated.

The Main Event for the TCW World Championship pitted Tim Starr © vs. Lifeguard Izzy Vaden for the top prize in wrestling with Chris Smith officiating. This match was a classic from start to finish. The veteran champion Tim Starr was showing the younger wrestler how things are done. With a little too much arrogance and several careless moments by the champion led to Izzy Vaden taking control of the match, but it was not long before the champion learned from his prior mistakes and began to take the young star more seriously.

Vaden showed in this match why he had earned the ability to challenge for the World Championship as he put Starr back on the defense. Now scared of the possibility that Tim Starr would lose, manager Braxton T. Wilson jumps to the ring apron and nearly falls to the floor, but rallies and tries to interfere where he is met with a stiff right from Izzy Vaden. This distraction has now allowed fellow Cypher Code member Chris Matthews to make his way out in a failed effort to interfere and save Cypher Codes leader Tim Starr. Vaden dispatches Matthews and then places his efforts solely on the champion. Starr is reeling, Vaden finishes him off and in an upset wins the Triple Crown Wrestling World Championship via pinfall.

Tickets are available now on www.triplecrownwrestling.com or visit our facebook page https://www.facebook.com/TripleCrownWrestlingTCW